Athlete of the Week | Softball | Sports 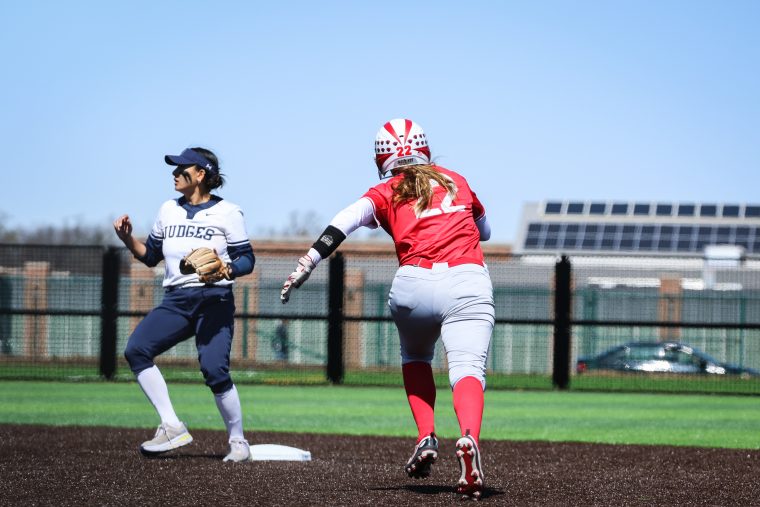 Baumstark sprints to second base in the team’s matchup against Brandeis; in the game, she hit two doubles and scored three runs in route to the Bears’ 8-2 victory. (Photo by Clara Richards / Student Life)

Maggie Baumstark is a freshman playing for the Washington University softball team. A native of Illinois, Baumstark has been a machine for the Bears this season as she leads the team in RBIs and hits. Over the course of 32 games and 107 at-bats, Baumstark has only struck out swinging four times, and she has an on-base percentage of .460. Student Life sat down with the freshman to learn more about her softball background, having something to prove in her first collegiate season and the softball team’s “Gossip Girl” inside jokes.

This interview has been edited slightly for length and clarity.

Student Life: Talk me through your softball story. What’s your first memory of softball and how did you get into the game?

Maggie Baumstark: I played baseball for a while before I even thought about softball. I kind of played with a chip on my shoulder, being the only girl on the team. I was convinced that I was just never gonna touch the softball and keep playing baseball all the way through. But it was becoming more and more apparent that if I wanted to keep playing, see the field and get playing time, it would have to be time to make the move to softball. When I was eight, one of the coaches in the travel organization around me called me up and asked me to try out for the softball organization. I was like, ‘Hey, why not?’ So I picked up a softball for the first time at that tryout. I was playing with my baseball mitt. The ball barely fit in the webbing. And I mean, he called me like a day later and said, “Hey, you have a spot on the team if you want it,” and I took it. I’ve been playing my whole life since then.

SL: Why choose WashU as the place to further your education and play softball?

MB: I wanted to go to school for the school rather than necessarily playing the sport. I was only gonna be playing for four more years, and my degree was gonna get me farther than I know after playing a sport. I had extensive conversations with my coach in the recruiting process, and after talking to people on the team, it really started to feel like a place that I could see myself playing for. A place where school comes first, but there’s also a really formidable athletic program behind it.

SL: On that note, what are you studying?

MB: I’m still undecided, but I think I’m leaning towards a double major in Psychology and Anthropology and a minor in Writing.

SL: So walk me through this season. With a current record of 24-8, you are a freshman leading your team in multiple categories, including RBI and hits. What is the inspiration behind these numbers?

MB: Honestly, I have no idea where that came from. I think it was a combination of the work that we put in in the fall. I think a lot of it is just pure adrenaline of this being my first collegiate season. I feel like I have something to prove. A lot of people don’t know who I am as a player. I want to show what I am capable of, and that’s just a mindset.

SL: What’s the team environment like? Who is the leader, who has the best taste in music, and most importantly, who is the team clown?

MB: So, this team [is] so much fun. I think that’s half the reason that we do so well. Who’s got the best music? That’s got to be Alex Rubin. She’s always the one with the JBL in the locker room. When we pull up to the field she’s got something playing inside pregame like ‘Baby’ by Justin Bieber. Team clown? That’s gotta be — and I love her to death — Ashley Kennedy. That girl will have you smiling and rolling on the floor laughing within three seconds of talking. She’s a beast on the field too. And in terms of leadership, I mean, our senior class is fantastic.

SL: What about outside of all that, in your limited free time — are you watching any fun TV shows right now? Listening to any songs?

MB: Yeah, I’m a big music person. I will listen to everything and anything. Lately, I’ve been watching Gossip Girl because so many people keep talking about it, and I feel so behind — I have no idea what’s going on. So many inside jokes that go over my head. I love writing. Actually, a couple of people on the team have been doing this challenge [where] we’re writing a poem every day for, like, the next 100 days. We’ve got a little group chat where we share lines with each other.

SL: My last question for you is one we ask in all of our Athlete of the Week interviews. Would you rather have fish for hands or adopt a child every time you hear Bohemian Rhapsody?

StudLife’s Athlete of the Week ‘Would You Rather Tracker?’: Bohemian Rhapsody: 6– Fish: 1