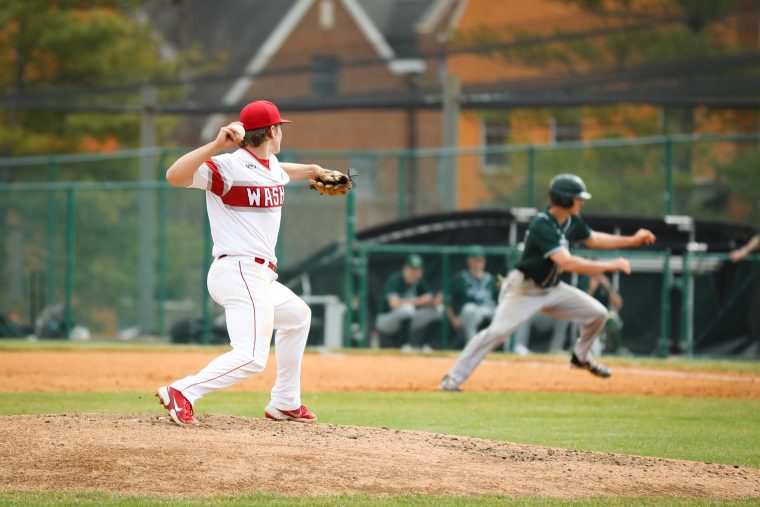 Hank Weiss checks a runner at first base. The freshman has an ERA of 1.93, the lowest on the team. (Photo by Clara Richards / Student Life)

The Washington University baseball team dominated their Saturday doubleheader against the North Park Vikings in two blowout victories. After a difficult start to the season, with the team holding a 1-5 record going into their spring break trip, the Bears are trying to claw their way back to a winning record and contention for a postseason berth.

Saturday’s first game featured thirteen unanswered runs in a quick 16-1 seven inning game. Pitcher Austin Sachen relegated the Vikings to one run in the first inning, which was immediately answered by Harry Mauterer singling to left field to bring home Clayton Miller. WashU was able to capitalize on fielding mistakes on a windy day to score 16 runs off of 15 hits; although the Vikings did net 5 total hits, they were held scoreless after the first inning. “Hitting is contagious,” catcher Hunter Goldberg said.  “We came together as a team, and it started at the top of the order.”

Leadoff hitter Tim Van Kirk led the team with 4 RBI, underscoring the team’s strong offensive performance, but the bottom of the lineup was equally promising. Junior Broghan O’Connor and freshman Brandon Buday scored three runs each. “We’ve been talking a lot about staying short, staying strong with the barrel and being on time. And guys were really able to figure that out today,” acting Head Coach Tyler Schmitt said. Schmitt, whose role has traditionally been at first base and as a hitting coach, stepped into Head Coach Pat Bloom’s place while Bloom was on paternity leave.

The Bears capitalized on the first game’s positive momentum in the second matchup, generating eight runs in the first five innings. Clayton Miller started on the mound, and he threw five solid innings to strike out five batters. The sophomore has a 5.87 ERA from 23 innings; he has struggled to match his 0.66 ERA from freshman year, but his experience on the mound has been valuable for the team going into high pressure matchups.

Although the Vikings tried to answer with their own offensive surge in the sixth and seven innings, scoring 8 runs in three innings, the strength of WashU’s batting order proved too strong for the Chicago team. Senior Matt Lopes closed out the last two innings, allowing only one earned run, and North Central boarded the bus empty-handed after a long afternoon on Kelly Field.

This season, the Bears have both benefited from and struggled with swings in momentum. Their blowout performances—16-1 against North Park, 16-3 against Ozarks (Ark.), and 21-3 against Illinois Wesleyan—have showcased the potential of their hitting power. But that momentum has worked against them almost as often; they struggled with pitching command in conference play, and a combination of fielding errors created high-pressure counts. The team is 1-3 in the UAA in the first conference play that the Bears have seen in two years.

Shortstop Harry Mauterer fields from the outfield. “Harry’s been on fire this year,” teammate Goldberg said about the sophomore. (Photo by Clara Richards / Student Life)

One of the biggest question marks for this team so far this season has been the bullpen. A lot has changed since the team took the field at the Division III World Series: they lost eleven seniors, the core of their pitching roster, assistant coach Adam Rosen, and junior shortstop Caleb Durbin. Much of last year’s success relied on the dominant pitching staff when the bats couldn’t find the balls, and the uncertainty of the pitching rotation is something that the Bears haven’t faced in Bloom’s time as coach. Now, it’s “a merry-go-round of guys coming in and out and filling whatever role they need to,” Goldberg said.

Still, the upperclassmen on the team also see the upside to this year’s bullpen. “The beauty of this year is if we go to a guy that’s not working, we have many more options to go to,” senior catcher and captain Zac Styka said. “We don’t have to expose that ace up our sleeve right off the bat; we can play it out and just see what happens. Yes, there’s some question marks, but there’s also a great opportunity for us to use a plethora of guys.”

That “plethora of guys” has averaged an ERA of 4.93 so far this season, and upperclassmen veterans include Kyle Coates, Matt Bauer, Austin Sachen, and Matt Lopes. The team has also had to rely on its newcomers early on in the season. Sebastian Guzman, who pitched the team’s first win of the season, throws a lively fastball and a wipeout splitter. Freshman southpaw Will Henkel has 9.1 innings under his belt and has established himself as a reliable arm with a 1.93 earned run average. Bloom said during the preseason that the first year class would get opportunities on the mound “whether they’re ready or not”; still, the inexperience on the mound has been problematic in late innings as the team searches to find a reliable closer.

The underclassmen have also been able to test their worth as position players after the team graduated last season’s entire outfield. The players have rotated all over the field as Bloom has tested them out in new positions; Andrew Huang and Jack Miller played one game each at first base against North Park, and sophomore Harry Mauterer took over Tim Van Kirk’s early-season role as shortstop. The transitory infield is a reminder that this is a drastically different team from last year with an entirely new identity.

The team will have high pressure matchups ahead of them with a midweek game against Webster. Webster, WashU’s main non-conference rival, holds a 14-5 record, and they have returned many of their battle-tested veteran players for fifth and sixth years. WashU split last year’s matchup for Bloom’s first win ever over the storied program; in Bloom’s time with the program, the team has a 1-3 record against their crosstown rivals.

Regardless of the programs’ histories, Schmitt said that he said he is looking forward to the matchup. “It’s good to put that benchmark up against good programs and compete against the very best. That’s what we strive to do when we schedule these games; it’s fun to compete against the best and be able to see where we’re standing.”