A heartbreaking end to an unforgettable season: Men’s basketball falls to Wheaton

Graduate student Jack Nolan lines up a shot against Wheaton in the second round of the NCAA tournament. (Photo by Clara Richards / Student Life)

If you walked into the Washington University fieldhouse hours after the buzzer sounded in the second-round game of the Division III NCAA basketball tournament — after the tears and hugs and looks to the sky wishing for one more shot, after the NCAA tournament banners had been stripped from the railings and players had gone home — you would never be able to guess what happened in the game’s 40 minutes.

But if you peeked into the team conference room in the corner of the fieldhouse, you might start to get an idea. Because on the whiteboard were written four bullet points, left unerased from the meeting at halftime. Numbers one through three listed adjustments that head coach Pat Juckem wanted to see from his team after 20 minutes of competitive basketball. Number four, written in all caps, was simple: JUST FIGHT.

And reading that message, you would know that it was the WashU men’s basketball team that played on that night. Because even though they ended their season in a heartbreaking 63-61 loss to Wheaton College, this team poured every last ounce of will they had into the game — for the University, for the game of basketball and, most importantly, for each other. While the season may have reached its end, this team will go down in the annals of WashU history as a group of players who, through adversity and indescribable tragedy, showed the WashU community what it means to fight.

The game itself lived up to expectations for March basketball: a gritty back-and-forth affair full of lead changes and momentum swings, with the game coming down to the final possessions. Every time one team seemed to have the upper hand, the other would swing right back and close the gap. For every bully bucket from junior Kevin Davet, Wheaton responded with a hard drive to the basket for a lay-up. For every three-pointer from a Wheaton wing shooter, the Bears responded with a tough fadeaway from senior Charlie Jacob or grad student Jack Nolan.

Davet in particular shined, as the Thunder struggled to counter his size in the paint. He finished with 16 points and 6 rebounds, making his presence felt down low and opening up scoring lanes for the WashU guards.

After leading for most of the second half, WashU held a 61-59 lead going into the final two minutes. Several contested possessions and two key stops from the Wheaton defense later, the Bears found themselves down 63-61 with nine seconds to play. Coming out of a timeout and inbounding from the near sideline, there was no doubt in anyone’s mind who Juckem wanted to get the ball to for the final shot. But as had been the case all game, Wheaton’s defense smothered Nolan after he inbounded the ball to freshman Hayden Doyle, cutting off his opportunity for another heroic moment. With the play busted, It was up to Doyle to make something happen in the final seconds. His contested fadeaway bounced off the rim as the buzzer sounded, bringing the game and season to a gut-wrenching end.

After the game, Juckem explained his thought process on the last play. “I credit Wheaton, they did a good job of taking away what we want to do,” he said. “We were trying to get Jack in an action and give him a clean look, and they took that away, so the ball kind of got stuck with Hayden and he had to make a play. Credit to him. He was able to get a shot and a decent look…it’s something certainly as a coach you replay and you’ll second guess and, you know, and that’s just part of what this position is.” 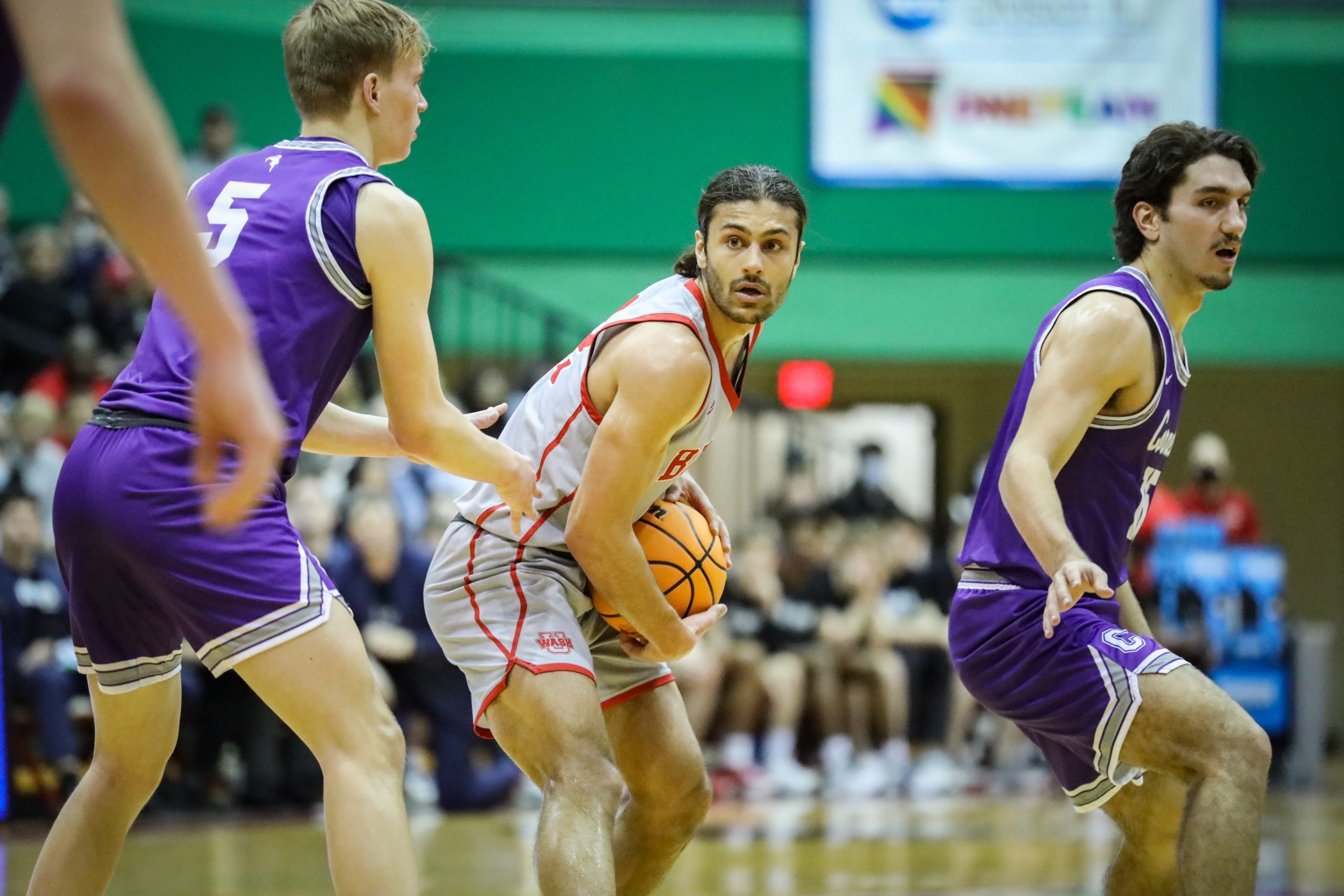 Senior Charlie Jacob looks for an open lane against Cornell College in the opening round of the playoffs. (Photo by Clara Richards / Student Life)

While the Bears didn’t get the outcome they had hoped for, nobody can ever say that this team didn’t put everything they had — and more — into this game and this season as a whole. Every player fought for their brothers, backed by a senior class that held it together and led through unprecedented adversity.

Jack Nolan fought for his brothers when he came back for one more season to lead the Bears offense. Then he fought harder when he played on a torn plantar fascia for the final weeks of the season because his team needed him; and even harder when he scored 22 points against a stout Wheaton defense after a hospital visit and just two hours of sleep the night before.

Seniors Charlie Jacob and David Windley fought for their brothers by doing absolutely everything asked of them: Jacob, the swiss-army man, finding tough buckets wherever he could and causing havoc on the defensive end; Windley, who fought for every loose ball, spilling himself on the floor to give his team a chance.

And then, of course, there is Justin Hardy. The senior has taken on an entirely separate fight of his own over the past year, one that nobody deserves but he got. But instead of folding, instead of giving into the overwhelming pain of diagnosis, Hardy used his fight to inspire his teammates, WashU, and everyone who has been lucky enough to hear his story. There are no superlatives left to describe him. Few people can get out of bed or walk to their mailbox during chemotherapy treatment — Justin Hardy averaged 11 points and 6 rebounds for an entire season. Days after having poison injected into his body, he strode out on the court and proved what willpower can achieve — and what it can endure.

That Saturday night, he watched from the WashU bench beside the assistant coaches, wearing a shirt bearing his name and the message “You Are Stronger.” Though he never checked into the game, his impact was felt by everyone in the fieldhouse, and it will continue to reverberate for years to come.

“Justin’s fight is our fight, and he’s poured so much into his team and his teammates, this game, this university,” Juckem said with a knot in his throat. “And while we try to support him, I feel like we’ve gotten it back 100-fold…I think that’s the essence of what ‘Hardy Strong’ is, and that doesn’t leave us.”

The loss brought a curt end to a season that can never fully be captured by words, from a 13-game win streak to an ESPN feature to a playoff berth to now. But there is a difference between loss and defeat. A loss goes down in the box score and hurts for a time, but it eventually washes away. A defeat is a loss you cannot overcome, that takes something from you that you cannot recover. A defeat admits that you lost faith.

This team may have lost, but they were never defeated. These players left everything they had on the court, and though the basketball gods did not favor them, they represented their school and their teammates with honor. They may question decisions or shots or possessions, but nobody will question whether they could have done more.

And they put on a show for the largest, loudest crowd the WashU fieldhouse had seen in years, certainly since 2020. Fans rallied together to support the team: The track team, clad in all black, leading chants from one side of the bleachers; the “Bomb Squad,” clad in camo and causing chaos on the other; and everyone in between, cheering passionately for their home team and reviving the school spirit that felt lost over the past two years. This team brought that back to life this weekend, offering one final gift to their community.

And the thing that motivated their fight? Love for one another. It was clear in everything they did: teammates hyping up Kevin Davet after a gritty and-1; the support every player showed to one another after a missed shot; the smile that overtook Charlie Jacob when asked to speak about teammate Hayden Doyle after Friday’s win; and the laughs that echoed in the gym an hour after the game as the seniors, showered and clad in street clothes, stood around center court one more time.

“There was so much love,” Juckem said. “I think we’re all aware that our experience is so much bigger than the game of basketball or what the scoreboard says, and I just made sure that we shared how appreciative we were and how much we loved every day.”

Hard times bring people together like nothing else, and this team has seen more than their fair share. But out of the trials of this season, the players, and the senior class in particular, leave the game with a bond that extends far beyond basketball. “You realize the moment you’re done playing that no one really remembers or cares who scored, who had got accolades, who played or didn’t play,” Juckem said. “It hits you like, ‘I’ve got this incredible support system the rest of my life…we have a bond that’s that you can’t get any other way. It’s priceless.”

‘We see him as a superhero’: Justin Hardy’s unlikely return to the basketball court