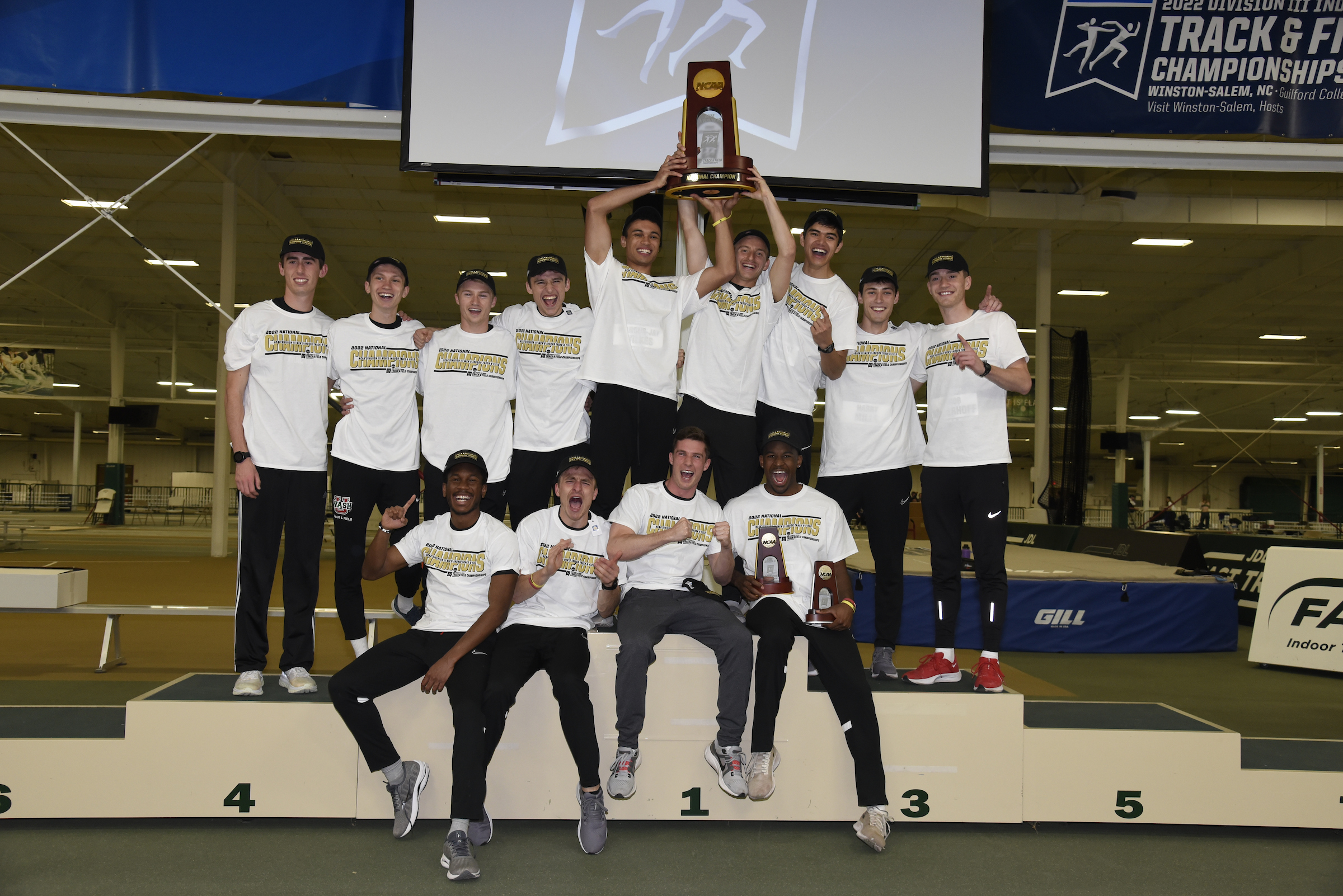 The men’s team lofts the championship trophy above their heads as they celebrate the first team national championship in program history. (Photo by Clint Brownlee / D3photography.com)

The Washington University Bears stepped onto the green and tan surface of JDL Fast Track at the NCAA Indoor National Meet on Thursday, March 10 with a strange sense of déjà vu.

The last time the team had been at that facility was March 12, 2020, the day that their entire season was canceled. They had driven all the way to North Carolina with national-caliber athletes, waiting to prove their worth at Division III’s highest stage. Then, with one phone call, everything was gone. For head coach Jeff Stiles, even the hotel held a strange reminder of what was taken away from the team; the last time he was in the conference room was when he gathered the team there to tell them that the meet was shut down because of the pandemic. To re-enter the athletic complex at JDL two years later was a full-circle moment for the team — this year, they were searching for redemption.

The Bears started off strong in the Distance Medley Relay, where the men’s team won the event against the stiffest competition in the history of the DMR. The three teams seeded ahead of WashU had all run historically fast times in the event, and as senior Jacob Ridderhoff was handed the baton for the final 1600 leg, he knew he had a tough task with a nationally-ranked miler in front of him. With 200 meters to go, Ridderhoff swung to the outside; even the announcers doubted he had the speed to pass his opponents. As he came onto the home straightaway, he started to grit his teeth; then, his face turned into a smile, because he realized that he had the speed and drive to outkick his opponents. Ahead of him, he could see his teammates going crazy on the side of the track; he sprinted ahead, and strides after crossing the finish line he wrapped his team in a huge hug. “That was just an incredible moment,” Ridderhoff said. “I felt so proud to represent not only my school but also my teammates, in essence, because it wasn’t all about me. It was about all the guys that were there racing with me. So I felt really special that I could do that.”

“That was something that made me just as proud: not the fact that they won, but how they won and how they chose to celebrate,” Stiles said. “Jacob’s reaction was to run to his teammates, and that’s something that you can’t plan. That tells me that his heart is aligned with the mission of our team, which is to be about something bigger than yourself.” Ridderhoff also finished fourth in the 3000, battling through tired legs the next day to score more points for the Bears.

The Bears’ early success in the DMR was compounded by graduate student Andrew Whitaker’s gritty win in the 60 meter hurdles. Whitaker had never run under eight seconds for the meet, but he ran 7.943 to drop .15 off of his previous record in the event, a career personal best. “Andrew expected to win even though on paper he had no business winning going into the meet,” Stiles said. “He’s one of the most competitive athletes I’ve ever been around. He loves winning, but he hates losing and keeps pushing himself.” First-time indoor nationals competitor junior Gio Alfred also netted points with a seventh place finish in the event.

When the 4×400 team took the track on Saturday evening, they knew exactly what they needed to accomplish to take the national championship. They had to beat UW-Eau Claire by at least two spots to have enough points to take the lead, and the first three legs of the relay all fought for their team to give senior John Harry Wagner a competitive spot going into the last two laps.    Racing down to the finish line, Wagner crossed it in second place for the relay; the team rallied around each other as they realized that they had tied to win a national championship. But the live scoreboard started to fluctuate after a protest, and in short succession, the team’s status changed as the officials reviewed the protest footage: they won outright, were disqualified, won outright, and ultimately co-won alongside UW-Eau Claire as the final judgment on the protest was made. “It was a lot of up-and-down emotion to end up back where it started,” Ridderhoff reflected. “It was a great moment, but it was kind of dulled by the fact that it was so up and down for an hour and a half.”

Stiles is not a crier, but he cried when he found out the final result. It was the culmination of 21 years at the helm of the program for him, the result of a dominant WashU track and field team with an environment of excellence. Whitaker and Ridderhoff are just two examples of the culture; Stiles has an entire roster of athletes who are fierce competitors, who care about elevating their own performances along with the entire program. Twenty-one years ago, the program had never been in the top 20 nationally. Even this year, the team was not supposed to win, ranked 16th coming into the meet. Yet their tenacity, their unwillingness to come in with anything but high expectations for themselves, their buy-in to the WashU program and their unwavering confidence made them national champions. The momentum didn’t start at the national meet: it started at the beginning of the season, as the athletes ran through Winter Break and did snowy track workouts. It started in the weight room and in pre-season workouts, surrounded by competitive teammates.

“Everyone’s performing at a school history level, and that’s such a contagious atmosphere — of seeing, ‘Why can’t I do what they’re doing? Why can’t I perform at a level similar?” Ridderhoff reflected. “That’s the culture that we have on our team — expecting each other to perform and holding each other accountable, and it brought the best out of everyone.”

Read more about track and field at Washington University: