‘We’re better than we were before’: Offense dominates as women’s basketball takes two UAA matchups 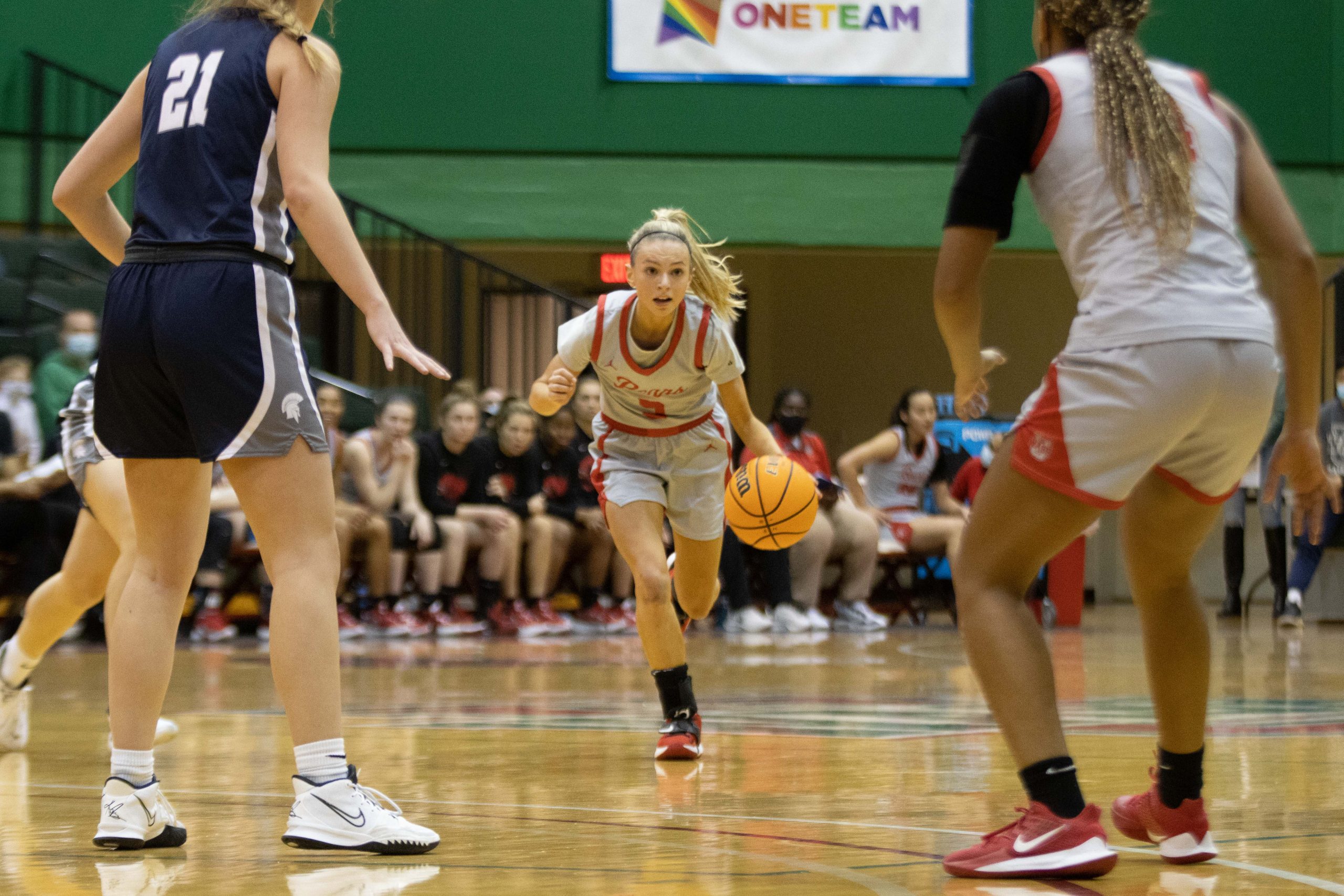 Junior Molly Gannon on Sunday against Case. The 95-64 win was the Bears’ largest margin of victory all season. (Photo by Jamie Nicholson / Student Life)

Offense has been a strength all season for the Washington University women’s basketball team, but no two games showcased it better than this weekend’s wins over Case Western Reserve University and Carnegie Mellon University. Riding sharp shooting and strong performances from their centerpieces, the Bears cruised to two victories and improved to 12-8 on the season.

Coming off an overtime loss to Case last Sunday, the Bears came out in this weekend’s rematch with a clear chip on their shoulder. The Bears jumped out to an eight-point lead by the end of the first quarter, led by junior Maya Arnott, while the defense held Case to a mere 11 points on 23% shooting. After an onslaught of offense in the second quarter from Arnott and juniors Karisa Granderson and Molly Gannon, the Bears’ lead had grown to 25, effectively sealing the game by halftime. Arnott ended her night with 28 points in yet another stellar performance; the forward has averaged 13.8 points per game this season while ranking first in the University Athletic Association in rebounds and field goal percentage.

The team as a whole outpaced Case in nearly every statistical category, soundly out-rebounding the Spartans and shooting an astounding 50% from three. The 95-64 win was the Bears’ largest margin of victory all season.

Head coach Randi Henderson said that while her offense garnered most of the attention all weekend, it was her team’s tight defense that impressed her. “Everyone’s just getting comfortable with each other and their role, and I think right now we have been starting a pretty sound defensive group,” she said. “And because that’s what they’re best at, they set the tone [this weekend].”

Monday’s game against Carnegie Mellon featured much of the same in terms of offense. An early flurry of threes from juniors Naomi Jackson and Sammi Matoush quickly set the tone for the Bears. It seemed like they couldn’t miss for the entirety of the first quarter, dropping 31 points with pristine ball movement and shot choice. Henderson said she enjoyed watching her team facilitate the efficient offense early in the game. “I think what was cool about the last few games is how, offensively, we’re playing together, moving the ball and making it really tough to guard,” she said. “It’s not just one player doing it all, so it’s been fun.”

The Bears once again went into halftime sitting on a comfortable lead, and while their offense slowed a bit in the second half (as can be expected with the quick turnaround from Sunday’s game), the defense ensured that Carnegie Mellon had no chance of clawing back. Five players scored in double digits on Monday, highlighting an offense that has found its rhythm after a bumpy beginning of the season. “That’s the way I like to play, is moving the ball like giving up a good shot for a great shot,” Henderson said of her team’s offensive output. “Just playing to each other’s strengths. And I think they finally not only are comfortable with their strengths, but they know each others’ a little bit better.” The two decisive wins not only improved the Bears’ record, but it demonstrated the team’s high ceiling when playing at full capacity.

After starting the season with some tough losses and injuries, the team is now 7-3 since the new year and 6-3 in UAA play. With five games left in the season, the Bears are trending in the right direction at the right time. But despite the positive momentum, Henderson’s message to the team remained the same as it has been all season: make the most of every moment. “Anything that you’re doing, you want to do with your whole heart, and you just want to love what you’re doing,” she said. “Otherwise, you’re just really wasting time and opportunity. And it doesn’t mean it’s going to be fun all the time or perfect and not without conflict. But you can walk away from every practice and every game with no regrets if you put everything that you have into your teammates and into your opportunity.”

The Bears’ next opportunity comes on Friday night at home against Emory University, with whom they are currently tied for second in the UAA standings. Henderson says that the team is looking forward to a second chance against the Eagles. “We did not score the ball well against them at Emory,” she said. “But I think I’m excited to play them again. We’re better than we were before.”

Basketball sophomore Jessica Brooks on a double-overtime win over Chicago, her gameday playlist and her TikTok feed

‘She has chosen to rise above adversity’: Keane as a role model for women’s basketball