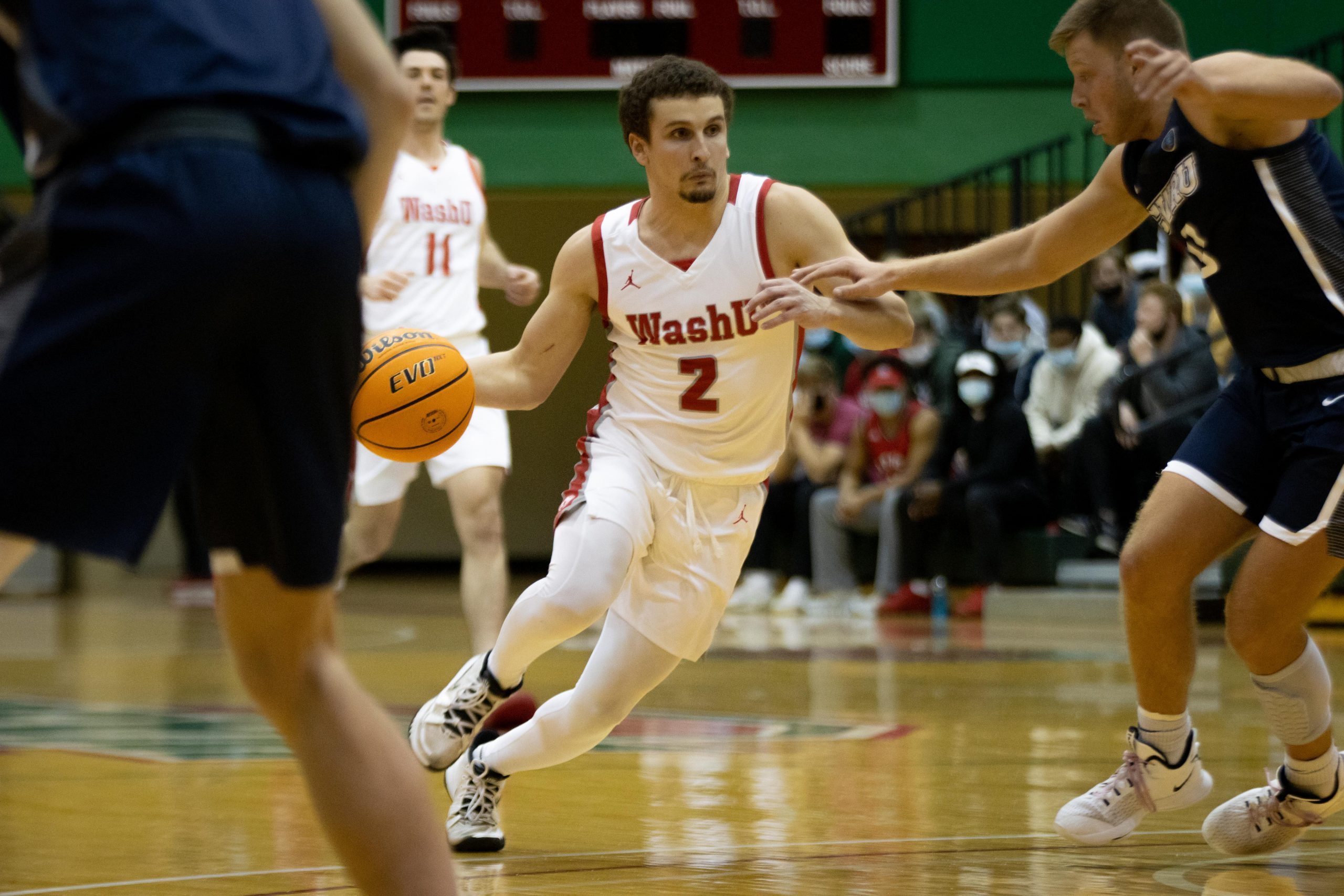 Junior Matt Gonzalo dribbles past a Case defender on Sunday. Gonzalo had 12 points against Case and nine against Carnegie Mellon. (Photo by Emmett Campbell / Student Life)

Walking into the Washington University Field House for the men’s basketball game on Sunday, one thing stood out: Jack Nolan, top scorer for WashU, sitting on a scooter at the edge of the bench. It was a dire sight for Bears fans, who have marveled all season as Nolan drained shots at a rapid clip, averaging 21 points per game (the top mark in the University Athletic Association) while shooting 37% from three. Nolan had torn his plantar fascia, the ligament that goes to the bottom of his foot, and would not be playing.

It was not just Nolan’s injury that might have been concerning for a Bears fan, though. The odds seemed pitted against WashU coming into the weekend’s rematches with Case Western Reserve University and Carnegie Mellon University. On top of Nolan’s injury, big man junior Kevin Davet remained on the sideline with a finger injury alongside freshman role player Drake Kindsvater. Coming off a weekend with two losses against UAA rivals, the team had key injuries punching holes in the lineup, and snow complications forced a grueling turnaround from Sunday to Monday.

But in the face of adversity, as head coach Pat Juckem said, “our guys haven’t flinched.” Doubt proved the greatest motivator for the Bears this weekend, as they gutted out wins against two tough UAA opponents in front of a home crowd. In doing so, they improved to 6-2 in the UAA and 16-3 overall, poised for a strong run at the top spot in the conference.

Sunday’s game against 16-2 Case Western saw several players step up to contribute. Senior Justin Hardy tied his career high for the second time this season with a 28-point performance in perhaps his best performance in a WashU uniform. “I got rolling early and they didn’t feel like they wanted to come and guard that,” he said. He penetrated in the paint and fought for contested buckets all game, providing the passion and the points for all 40 minutes.

Hardy said that after last weekend’s losses, the team wanted to make a statement on the court on Sunday. “We’re playing with pride, right? We got beat off the dribble last weekend and that led to our demise. And we just said, ‘Listen, we’re going to have to be tougher on the ball, tougher on the glass,'” he said. “We struggled a bit with those things today, but we still got it out at the end of the day with one in the left hand column, and that’s all you can ask for.”

Junior Matt Gonzalo also made the most of his increased role, dropping 12 points and flying around the court on defense in a scrappy, gritty performance. Head coach Pat Juckem said that he was particularly proud of Gonzalo’s performance on Sunday. “You earn your success, and I think he earned everything that happened today and that is the result of the investments he’s been making,” Juckem.

With strong performances from Hardy, Gonzalo and several role players and a return of the defense that propelled WashU on its 13-game winning streak, the Bears pulled away from Case in the second half en route to a 76-68 victory.

With only a 27-hour turnaround after Sunday’s win, the Bears had little time to celebrate (or rest) before taking the court on Monday to face Carnegie Mellon, who stole a 71-68 overtime win last weekend to snap the Bears’ 13-game win streak.

After a slow start, however, the Bears found their offensive rhythm, feeding the ball to Hardy and freshman Hayden Doyle, who ended the game with a career-high 21 points. “I felt good,” Doyle said about his performance. “Obviously, you just work at it, and when your opportunity comes, you just try and be as prepared as you can.” The defense excelled as well, holding Carnegie to a mere 22 points over the first 20 minutes of play.

The second half saw fatigue begin to set in, however, allowing Carnegie Mellon to claw back late. Juckem said that he expected some exhaustion from his team due to the tight turnaround, with a schedule similar to the NCAA tournament with back-to-back games. “On the second day, it’s just a toughness—you have to dig deep, and typically they’re games like that, they’re tight and just grinders,” he said.

After trading baskets inside the minute mark, the Tartans tied the game with just two seconds remaining, once again forcing WashU into overtime. But unlike last weekend, the Bears did just enough to pull out the win. Clutch baskets from Doyle and a key three-pointer from Gonzalo sealed the 65-63 victory and capped off an impressive weekend of basketball. “I couldn’t be more proud of our team for not just tonight but for the last two days of digging deep and getting two wins,” Juckem said.

Despite injuries in key areas, despite playing back-to-back games and despite stumbling the previous weekend, WashU pulled off two statement wins. It would have been all too easy to excuse a loss this weekend, but the Bears put their heads down and found a way to win. “I’m so proud of our guys for just finding a way,” Juckem said. “There’s no bonus points for art, artistry, or anything like that.”

Under normal circumstances, Nolan would have a nine to 12 week recovery, but he remains hopeful that he’ll return. “I’ll be back out there at some point,” the graduate student said, adding that he was going to talk to his doctor this week about his treatment plan. “I’m not sure exactly what that’s gonna look like, but given it’s my senior year, I’ll be back out there.”

The Bears’ next test comes on Friday night: a heavyweight matchup with UAA-leader Emory University at home. With Nolan and Davet still out, the team will have to continue their aggressive, hard-nosed play in order to pressure Emory, who is on a seven game win streak. But if the past two days have been any indication, this WashU team is in no shortage of heart.

‘We see him as a superhero’: Justin Hardy’s unlikely return to the basketball court

From chasing a championship to searching for closure: Men’s basketball’s final week, in the Bears’ own words, Part 1