Freshman Hayden Doyle creates space against an NYU defender Friday. The Bears blew out the Violets, 97-61, in their biggest win of the season. (Photo by Curran Neenan / Student Life)

Men’s basketball has continued their complete domination on their home court this weekend with two wins against New York University and Brandeis, bringing the team to a 13-game win streak and a 14-1 record overall. WashU is undefeated in nine home games.

The Bears started their weekend Friday with a 36-point win against the NYU Violets in a spectator-less Field House with a final score of 97-61. WashU scored first and never let their opponents catch up — five minutes into the game, they were leading 9-3, and their lead increased incrementally from there. Graduate student Jack Nolan, who has averaged 22.5 points per game, led the Bears with 29 points. Justin Hardy and freshman Hayden Doyle also played major minutes, scoring nine and eight points respectfully. The second half of the game saw nine reserves rotate in for the team, showcasing their depth on the bench. Head coach Pat Juckem has had to utilize that depth at various points in the season as players have been sidelined due to quarantine restrictions.

Two days later, the Bears swept past Brandeis 67-53 to secure their second win of the weekend. Nolan led the team in scoring again, and over the course of the weekend did not miss a free throw, going 10-10 over both games. He has scored 30.4% of all the Bears’ points this season.

The team’s defense has stood out all season; the Bears lead Division III in scoring defense with their opponents averaging 56.5 points per game. Recently, Doyle said that Juckem has made an emphasis on transition offense, making sure that the team is rebounding and taking advantage of layups during transitions. “It’s been our defense all year,” Doyle said. “We’ve all just bought into playing super hard, and it just speaks to how seriously we take every possession.”

For a team whose competition was canceled last year, this season is a welcome chance to make a mark on WashU’s record books. “Every single day, we walk into the gym and realize that so many things had to go right for us just to get to this point in practice,” senior David Windley said.  “We’re lucky to be playing with the current environment — that alone feels like a mini miracle sometimes.”

The Bears are currently ranked third in Division III with a win against the number two seed, Illinois Wesleyan. “People can say what they want to about us. But in my eyes, we have absolutely no reason not to be the favorites moving forward,” Hardy said. “That starts with winning a conference title.” WashU has nine conference matchups ahead of them and is the only team undefeated so far in UAA conference play.

After a slow start to their season, the Washington University women’s basketball team has started to find a rhythm as they finish out their third weekend of UAA matchups. A loss to No. 9 New York University and a win against Brandeis University over the weekend put the Bears at 3-2 in UAA play and 9-7 overall. 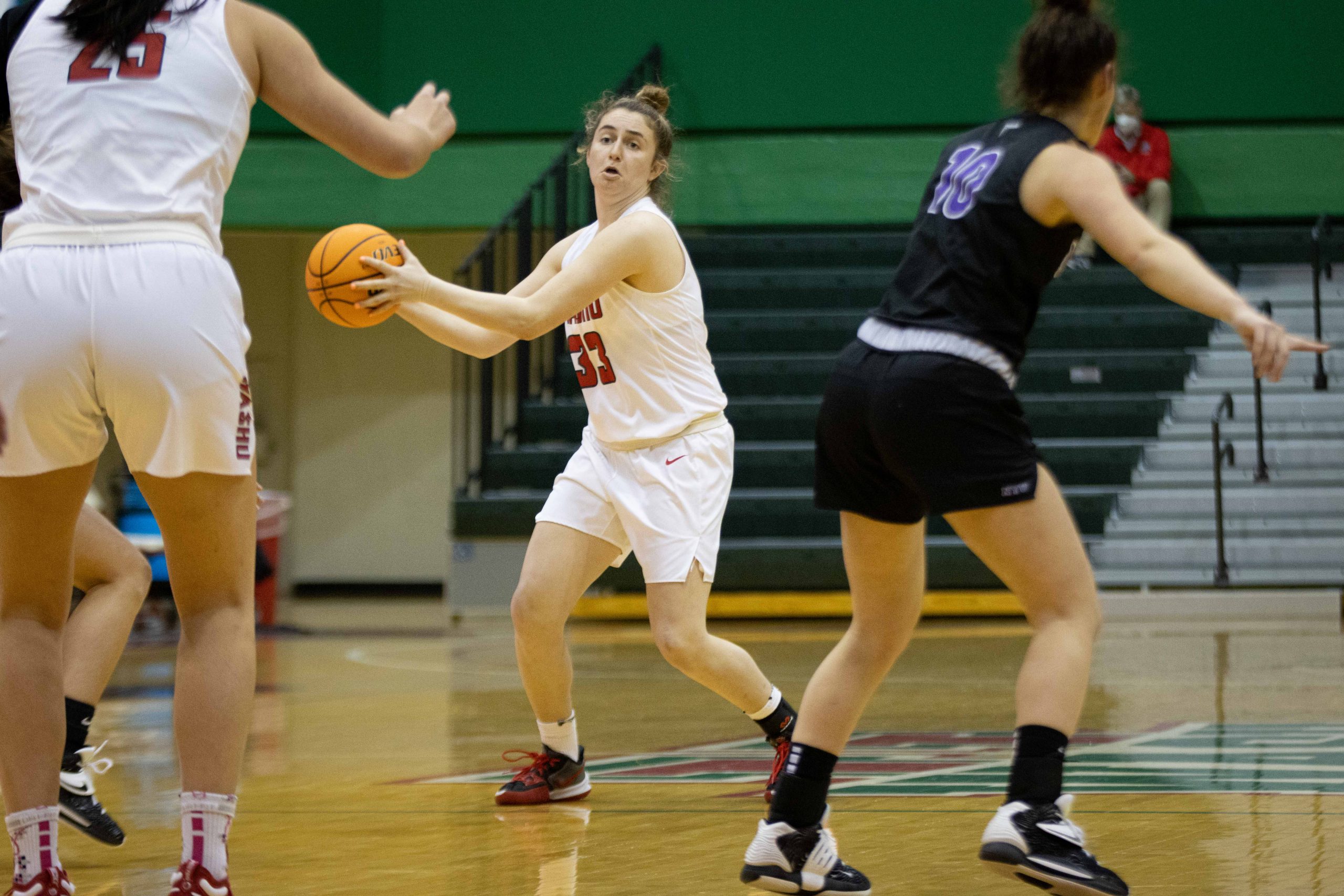 Their four losses to open the season in November, three of which were decided by three points or less, showed flashes of talent but lacked consistency, as the Bears shot below 40% from the field in three of four losses. Since then, however, the team has turned a new page, going 9-3 and improving in nearly every statistical category. Sophomore guard Jessica Brooks said the team had to refocus after the tough start to change the course of their season. “I think we were just way more intentional about our offense and defense,” Brooks said. “It starts on defense. Our coaches always said that, so they really made sure we focused on defense, focus on turnovers and then the offensive game just kind of came together.”

Injuries and COVID-19 have played a role in recent weeks, as the Bears have had to adjust to positive tests, changing policies, and a depleted bench for many of their games. According to Brooks, two key contributors missed the Chicago game due to COVID-19 protocols, and the Emory and Rochester games saw the Bears with only eight healthy players. Still, the team has persevered. “I think it just goes back to how we all trust each other a lot more now,” Brooks said. “You can kind of count on anyone; it doesn’t have to just be like one specific person.”

Leading the offensive charge have been Brooks and junior forward Maya Arnott, who lead the team in points per game. Brooks in particular has been a revelation in her first season of action; the sophomore ranks second in qualified players in field goal percentage (48.9) and second in points per game (11.7), and she also leads the team in overall points. She demonstrated her prowess on the offensive end in WashU’s dramatic double-OT win over Chicago earlier this month, where she put up 32 points and eight rebounds on 12-19 shooting to propel the Bears past their rival 102-97.

On Friday, WashU ran into an undefeated NYU team who dealt the Bears their first home loss of the season in an 85-68 affair. After battling early for the lead, NYU pulled away in the second quarter during a cold streak for the WashU offense and never looked back. Junior guard Molly Gannon’s team-leading 12 points were not enough, as the Bears suffered their second loss in UAA play.

Sunday’s matchup against Brandeis ended the weekend on a positive note, however, as the Bears used a third-quarter scoring barrage to surge past the Judges 79-53. Gannon again led the team with 19 points, and senior Samantha Weaver led a dominant effort on the glass, out-rebounding Brandeis 48-20.

Looking ahead, the Bears charge head-on into their UAA competition, with only conference matchups from now until the end of February. Key games to watch in that period will be a rematch with Emory University, who edged out a 60-56 win over WashU earlier this year, on Feb. 11; their second game against NYU, who remains undefeated in the UAA after five games, on Feb. 18; and the home finale against Chicago on Feb. 26.

From chasing a championship to searching for closure: Men’s basketball’s final week, in the Bears’ own words, Part 1

Athlete of the Week: Sam Weaver dishes on building a team dynamic and leading a young team