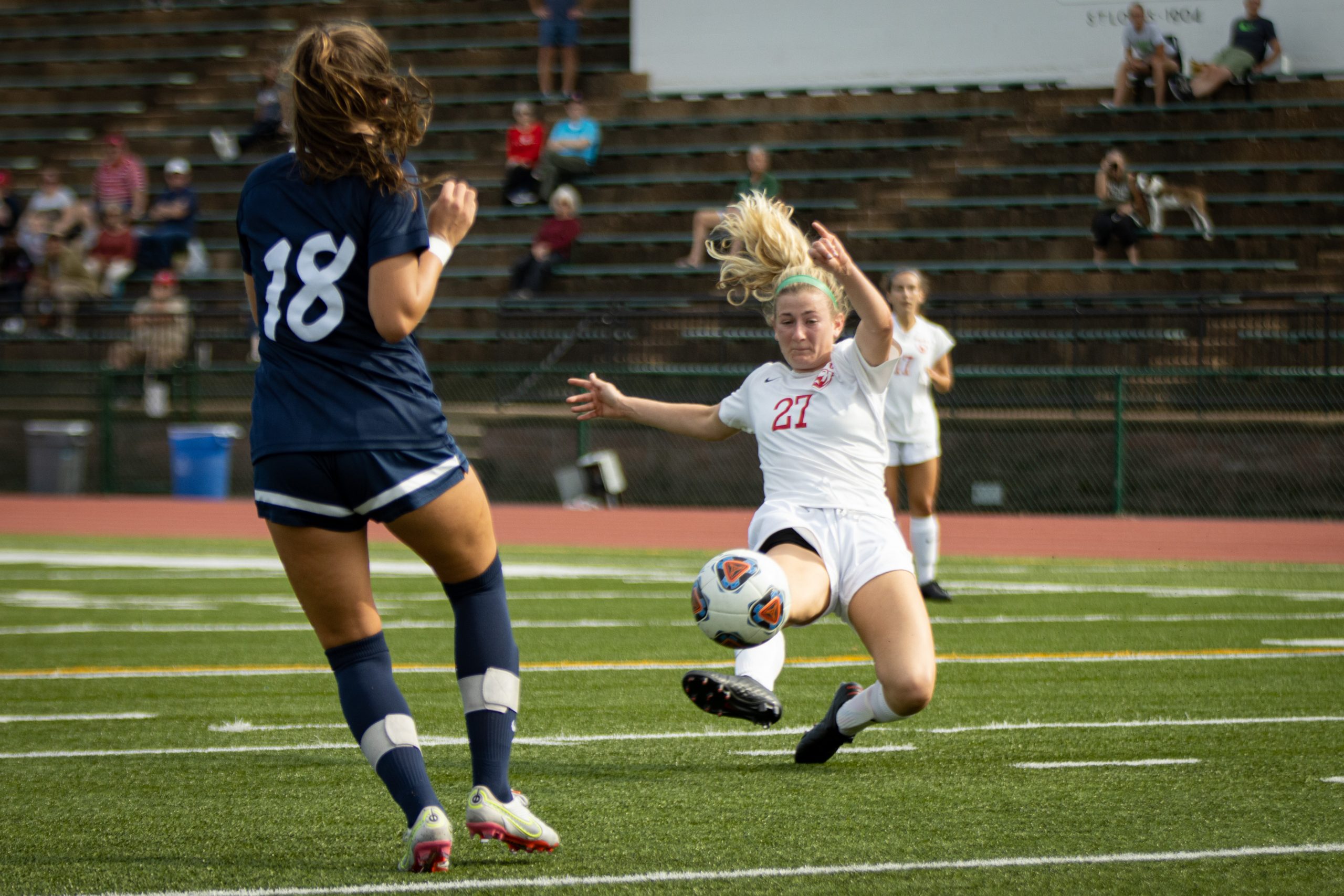 Senior Jess Shapiro launches a shot toward the goal in the Bears’ win over Wheaton in September. (Photo by Curran Neenan/Student Life)

The No. 6 women’s soccer team defeated No. 16 Carnegie Mellon University 1-0 on Friday to clinch their sixth straight University Athletic Association title and the 15th overall in program history. On Sunday, however, the Bears lost their first game this season, falling to No. 11 Case Western Reserve University 1-0, ending their undefeated start to the season. The two games moved the Bears to 13-1-1 on the season and dropped them from the third spot in the rankings.

Despite Friday’s contest being the Bears’ first in which they did not record more shots on goal than their opponent, they still made the most of the opportunities they saw. After missing some looks in a scoreless first half, a shot from senior Jess Shapiro in the 64th minute in a crowded box found the back of the net to put WashU up 1-0. That was all they needed, as the lead allowed the Bears to play more conservatively and rely on their tight defense which, as it has all season, held strong until the final whistle blew.

After being named UAA Athlete of the Week on Monday, sophomore goalkeeper Sidney Conner continued her strong play in goal, notching three saves, including a shot by a Carnegie Mellon attacker in the final three minutes, to seal the team’s eighth shutout of the season. “She’s been a huge part of our success this season,” head coach Stephanie Gabbert said. “What she did was neutralize their attack so much along with our backline, and she’d sit in behind them cleaning things up.”

While the offense may not have been as dominant as most of their other games, Gabbert said that it was all part of the plan coming in. “[Carnegie Mellon] did exactly what we wanted them to do,” she said. “Part of our game plan going into that was, we knew they were going to serve a lot of long balls out of the back out to their forwards, so we were comfortable with them doing that because we feel like our back line is the best of the best.”

As Friday’s limited shots for the Bears found the net, Sunday told another tale. Despite outshooting Case Western, as they’ve done to opponents all season, they failed to score against a tight Case defense. It was only the second blank slate for WashU this season (the Bears tied 0-0 with No. 9 Loras College early in the season).

While it did not end in the Bears’ favor, the game was closely contested throughout. WashU registered 10 shots, including a shot off the crossbar and four shots that were saved by the Case goalkeeper. “We had good looks again, we’re just not finishing them off like we want to,” Gabbert said.

There was little that Conner could do on the only goal of the game, a shot into the lower-left corner in a crowded box. The Bears failed to respond for the rest of the match. “Case was happy to sit back to defend us a lot and they did a pretty good job of that,” Gabbert said. “They’ve got some good center backs who shut down the middle pretty well. But I think our attack can be a little sharper.”

Despite the first loss, Gabbert said that the team still feels confident as the regular season closes out. “I think if anything it kind of makes us more determined to shore up some of those things that we’ve been getting by in the season that we won’t get by with once we get into the postseason,” she said.

The Bears finish the regular season on Saturday at home against rival No. 16 University of Chicago. Gabbert said this game may just be the most competitive of the season. “They’ve had a couple bad results lately, and they’ll be playing for their ability to stay in the postseason, frankly. So they’re going to come at us with everything,” Gabbert said. “There’s just going to be a lot of emotion, so we’ve got to stay focused on our game plan and the business that we’re trying to do.”

From pole vaulting to speaking Norwegian, Ariana Miles does it all