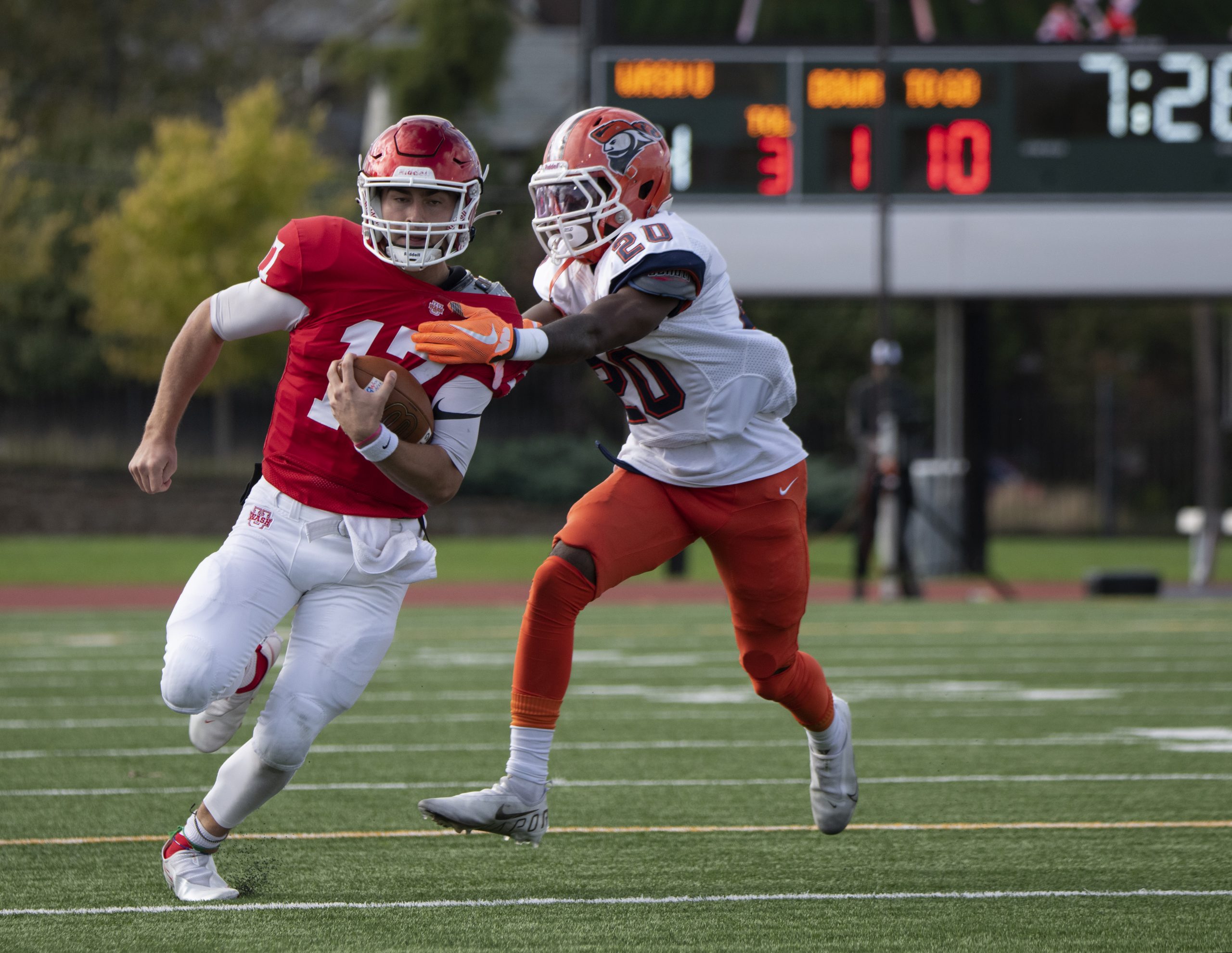 The win brought the Bears to 6-2 on the year with two games to play in the regular season.

Things started off slow for the Bears, as they failed to convert a third and fourth-and-inches try inside the Carroll redzone. On the next drive, a penalty negated a perfectly-executed fake punt. It was the defense, however, that kicked things off; senior Kyle Schroeder’s strip sack, recovered by junior Connor Burke, set the Bears up for a touchdown pass the ensuing drive to put WashU on the board. Head coach Aaron Keen said after the game that he had during practice last week “preached” the importance of creating turnovers and that he had wanted the team to “meet the challenge.” That challenge was met and then some, as WashU forced four turnovers over the course of the game, including a fumble recovery at their own one yard line in the third quarter and a pick six to seal the game.

On the opposite side of the ball, a balanced offense ripped through Carroll’s porous defense that allowed 445 total yards, 320 through the air and 125 on the ground. A steady run game led by senior Tennyson Holmes, who had 14 carries for 52 yards and a touchdown, complemented Rush’s aerial assault, which included 112 receiving yards for junior Cole Okmin.

Asked about how this team feels after their four-game win streak, Keen said the success has come from the team’s hard work throughout the week. “[They’re] more intense in practice, they’re into it a little more, and that helps your momentum,” Keen said. “The team has done a great job of capturing that positive momentum.” He also noted that they’re just blessed to have “10 guaranteed opportunities to play a game that we love” after 18 months off.

The Bears were not the only ones to enjoy the win; the crowd was ecstatic all night — more ecstatic than usual, as the game was held on Parent & Family Weekend, leading to a packed and loud audience at Francis Olympic Field. “Anytime we can get a great crowd out here and then play good football and keep people excited, that’s a plus,” Keen said.

The team’s next matchup is against top-ranked North Central College (8-0) in what will be a tough battle at home. “We’re going to have to play a lot cleaner football,” said Keen. “We’re excited to correct mistakes [and] we have to play incredible in all three phases to be able to hang in with North Central.”

Get ready for the playoffs with these reflections from the StudLife Senior Sports Editor:

WashU’s fall teams: Where they stand and where they’re going