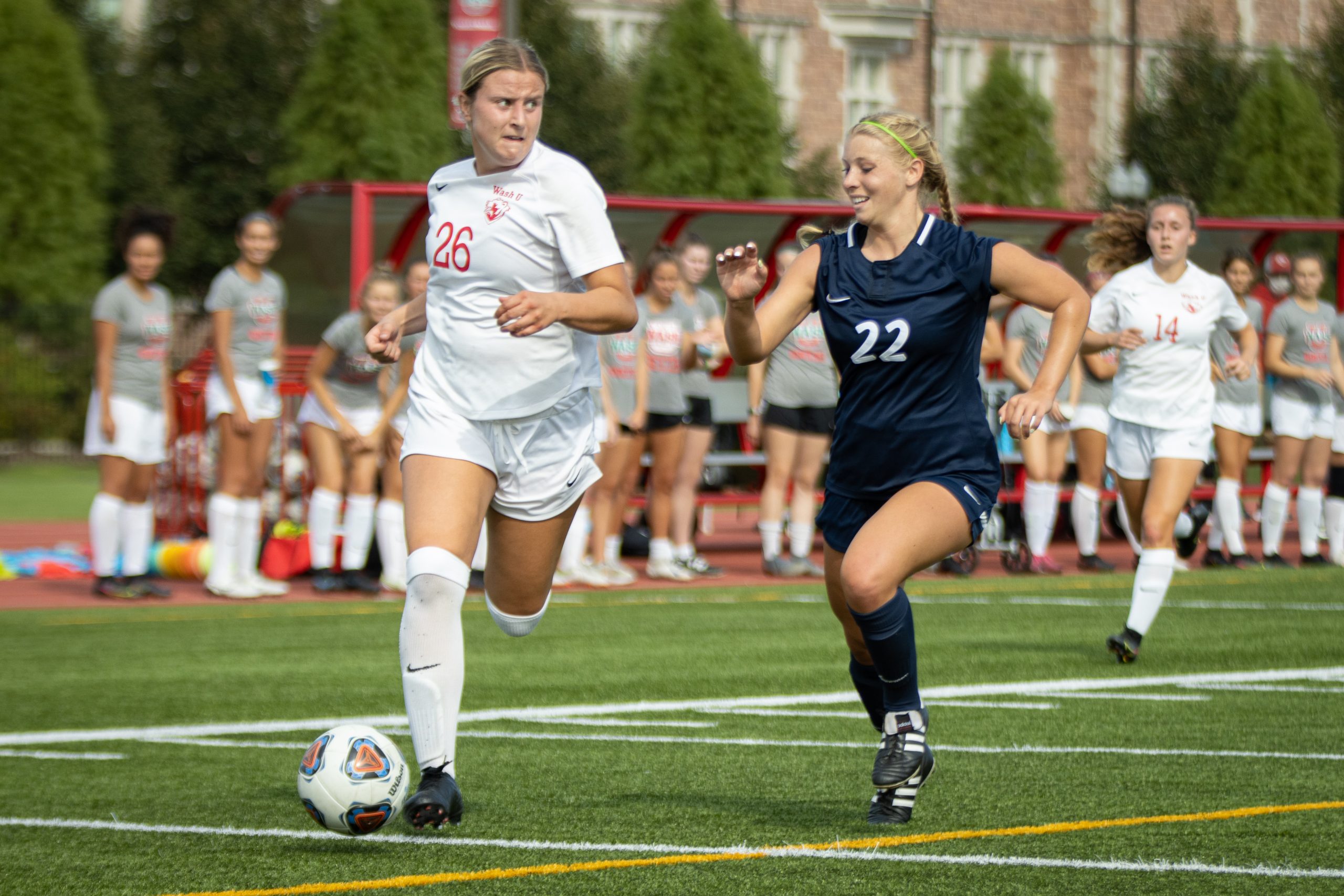 Sophomore Tyler Wilson dribbles up the sideline against Wheaton College in September. The women’s soccer team is now 12-0-1 ahead of three final UAA matchups. (Photo by Curran Neenan / Student Life)

We’re entering the final stretch of the regular season for Washington University’s fall sports, but most teams are far from finished. Playoffs are on the horizon and some teams may even contend for top seeds. With so much exciting activity in the upcoming week, I thought I’d share three questions I want answered in the last games of the regular season.

Much has changed since the women’s soccer team’s last season: COVID forced a class to graduate without a senior season, former head coach Jim Conlon left after 13 years at WashU, and two young classes entered this season with no game experience. What has stayed the same? They still win. Undefeated still after two months of competition (12-0-1) and ranked No. 3 in the country, the Bears look as strong — if not stronger — than past years. Still, they face their toughest slate of games to close out their season: No. 16 Carnegie Mellon University, No. 11 Case Western Reserve University and, to close out their season, No. 12 University of Chicago. The Bears have looked dominant in nearly every match this season, but they knew these three games would be their toughest gauntlet. If they can come out the other side with a clean record, it may give them the confidence they need to make another deep playoff run.

Does football make the playoffs?

With North Central almost certain to take the College Conference of Illinois and Wisconsin title (they’re undefeated and ranked No. 1 in Division III), WashU will need to get an at-large bid to make the NCAA playoffs for the first time since 2016. Junior quarterback Matt Rush has led the team to some impressive wins, and the team has shown flashes of greatness, but their loss to Chicago to open the season could be a big red flag. If they want to have a shot, they’ll have to go at least 2-1 in their last three games and hope for a little help around the rest of DIII football.

Just how good is this men’s soccer team?

There’s no question that this year’s men’s soccer team is the best it has been in recent memory. After starting the year unranked, they’ve exceeded expectations, leading to a 9-2-1 record and the No. 7 spot in the nation. But while they’ve played well to this point, some of their games have been closer than the box score would indicate. A top 10 ranking is impressive, but with a loss to No. 15 New York University and a matchup against Emory in which they were lucky to leave with a tie, there are still questions about this team as the regular season winds down and playoffs loom. Barring catastrophe, they’ll make the postseason, and I hope they prove all my doubts wrong when they get there.