Volleyball drops two of three ahead of final UAA round robin 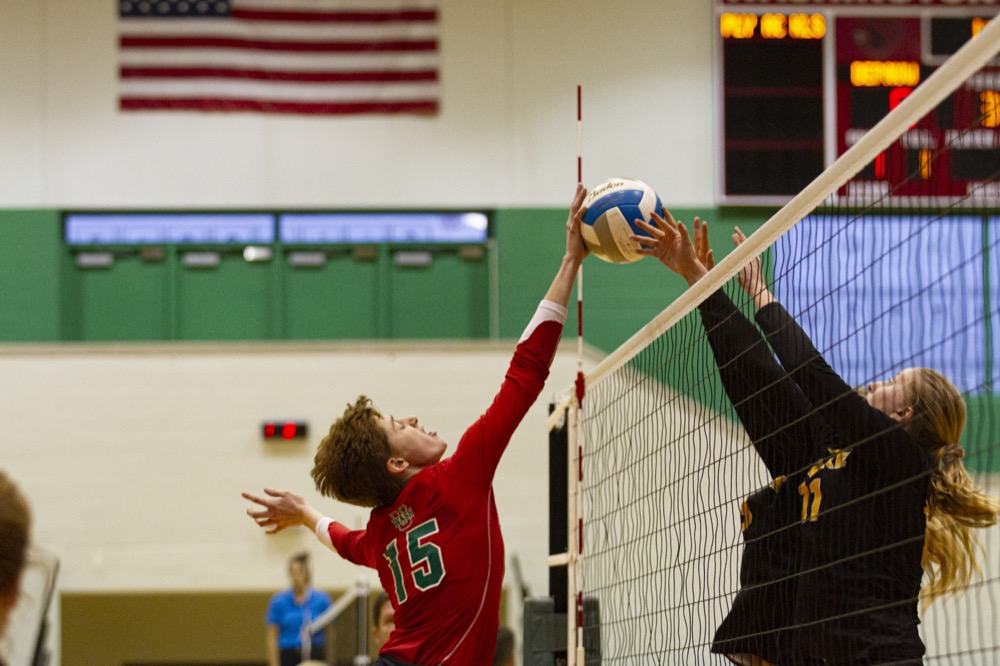 Alaina Bohrer fights for a point against Centre College in the fall of 2019. The Bears fell to 11-7 after going 1-2 on the weekend. (Photo by Curran Neenan/Student LIfe)

The No. 23 Washington University women’s volleyball team closed out the WashU Invite Tournament this weekend with one win and two losses, putting their record at 11-7 on the season. The Bears fell to University of Wisconsin-Whitewater 3-1 in their Pride Night match on Friday, beat Greenville 3-1 in their second match that was dedicated to breast cancer awareness and were swept by Illinois Wesleyan University in their final match, 3-0.

WashU vs. University of Wisconsin-Whitewater

In a four-set thriller, the WashU Bears fell short to UW-Whitewater with a score of 3-1.

In their opening set, the Bears looked the better team against the Warhawks. They led the game with a scoreline of 16-11 but Whitewater picked up the pace and eventually tied the set at 18, then won the set 25-21 after a four-point run.

The second set saw the Bears at their best, as several early kills courtesy of Alaina Bohrer saw them jump to a sensational 12-3 lead. Whitewater fought back, though, as they managed to pull a few kills back to bring the set to 22-16. But the Bears’ tenacity proved too much for them, as they were able to tie the match at 1-1 with a scoreline of 25-17.

The third set didn’t go well for the Bears, as several attack errors saw them fall to 2-1 against the Warhawks. The final set saw the Bears give all they had against a Whitewater team that had all the momentum following their previous victory. But Whitewater managed to edge out WashU in a much needed set to win the match 3-1.

In a close matchup throughout, WashU beat Greenville in their second match, 3-1.

On the strength of several kills from freshman Jasmine Sells and a few service aces from Bach, the Bears managed to take the first set of the matchup. They led Greenville in much of the set, leading 11-4 at one point. But Panthers fought back, managing to tie the game at 23, before their own attack errors gave WashU the set at 25-23.

The second set was fairly close from the beginning to the end. WashU did have a strong start, though, as four consecutive kills saw them jump to a 0-4 lead. But Greenvile fought well, managing to tie the game at 22-22, before closing it to bring the match to 1-1.

In the remaining final sets, the Bears cruised to two comfortable sets victory to win the match at 3-1. The scoreline of both sets was 16-25 and 17-25 respectively, and both Bohrer, Bach, and Sells played huge parts in them.

At the end of the match, Sells, who led the team with 13 kills, credited positive performance to the team’s energy. “We were coming off a tough loss, and I think as a team we stayed positive and fed off each other’s energy,” she said.

The Bears were swept in their final WashU Invite match against Illinois Wesleyan University.

Despite losing all three sets, the Bears held their own against IWU. In the first set alone, they led 17-14 after scoring five unanswered points, courtesy of junior Amanda Gild’s service aces. But the Titans were able to bounce back, tying the set at 25-25, and eventually winning it at 30-28.

The second set was fairly close, but WashU fell short 25-23, and lost the final set 25-17, failing to deny Wesleyan the sweep.

Despite the loss, Bach finished the match with 13 kills, Bohrer had 11, and senior Caitlin Lorenz tallied seven of her own.

At the end of the weekend, Lorenz still praised the team’s energy throughout the invite. “We always pride ourselves on having a fantastic bench that goes crazy and brings incredible energy,” she said.

Lorenz also stressed the importance of having the Pride Night and breast cancer awareness match. “Bringing attention to the two causes was very important to the team as we strive to be inclusive and open to all genders and sexualities,” she said. “We always want to be a family on our team and the athlete community.”

The Bears will face off next against University Athletic Association opponents Case Western and Carnegie Mellon on Sunday, Oct. 17 in Atlanta.