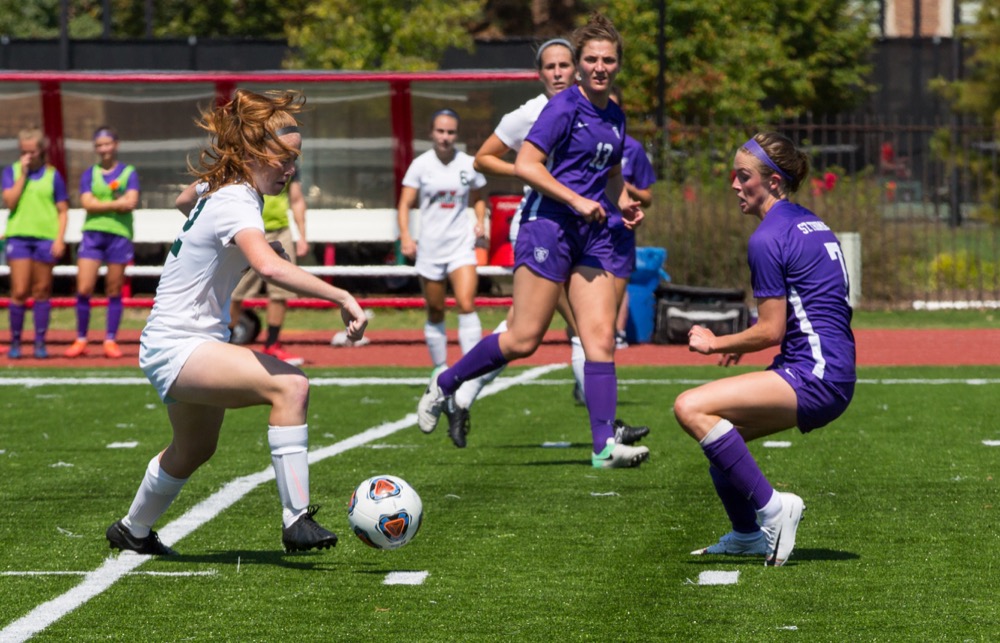 Jolie Carl jukes a St. Thomas University defender during the Bears’ September 2019 loss to the Tommies. Carl had the game-winning goal against Emory on Sunday. (Photo by Matthew Friedman/Student Life)

After 89 minutes of back and forth ball play and a 0-0 scoreboard against Emory University Sunday, the No. 3 Washington University women’s soccer team managed to land a ball in the net with just 40 seconds left in the game, clinching their ninth win in dramatic fashion.

From the onset, it was clear that the two teams were evenly matched. Throughout the first 45 minutes, both had multiple opportunities, with seven shots each, but were shut down thanks to excellent play by the defenses and goalkeepers.

As they entered halftime, the zeros in the score reflected WashU goalkeeper sophomore Sidney Conner’s and other defensive players’ contributions. During the break, head coach Stephanie Gabbert switched up her lineup in an attempt to drum up some action for WashU. “We’ve been talking all day about being willing to compete and competing for the ball and we were doing that the whole game but we just made a quick adjustment going into the second half where we changed our formation a little bit,” Gabbert said. “That helped us keep better possession of the ball and that started opening things up.”

Even with the changes, the second half continued much the same. With 23 minutes remaining, two extremely close scoring chances for WashU made it seem like the Bears could gain control, but the scoreboard remained blank.

As the final countdown toward the end of regulation began, the game looked destined for overtime. Suddenly, Bears freshman Eve Kubala broke free on the right side and, completely open, made for the goal. As she approached her shot, she was swarmed by Emory defenders, but managed to get off a cross, which junior Jolie Carl placed swiftly in the net. With just 40 seconds left, Carl broke the seal and finally put the Bears on the board.

Emory went fully offensive in the remaining seconds, but it was too late. The final whistle blew, and WashU clinched a hard-fought 1-0 victory.

Gabbert praised Conner, who had six saves, as the “difference maker,” giving her “a lot of credit” in the game. Gabbert believes the competitiveness of this game will be reflected in the future, saying “the game is indicative of what our conference is like.”

The team next faces New York University at home on Friday at 5:30 p.m.