Men’s soccer vaults to No. 9 in rankings after win over Rochester 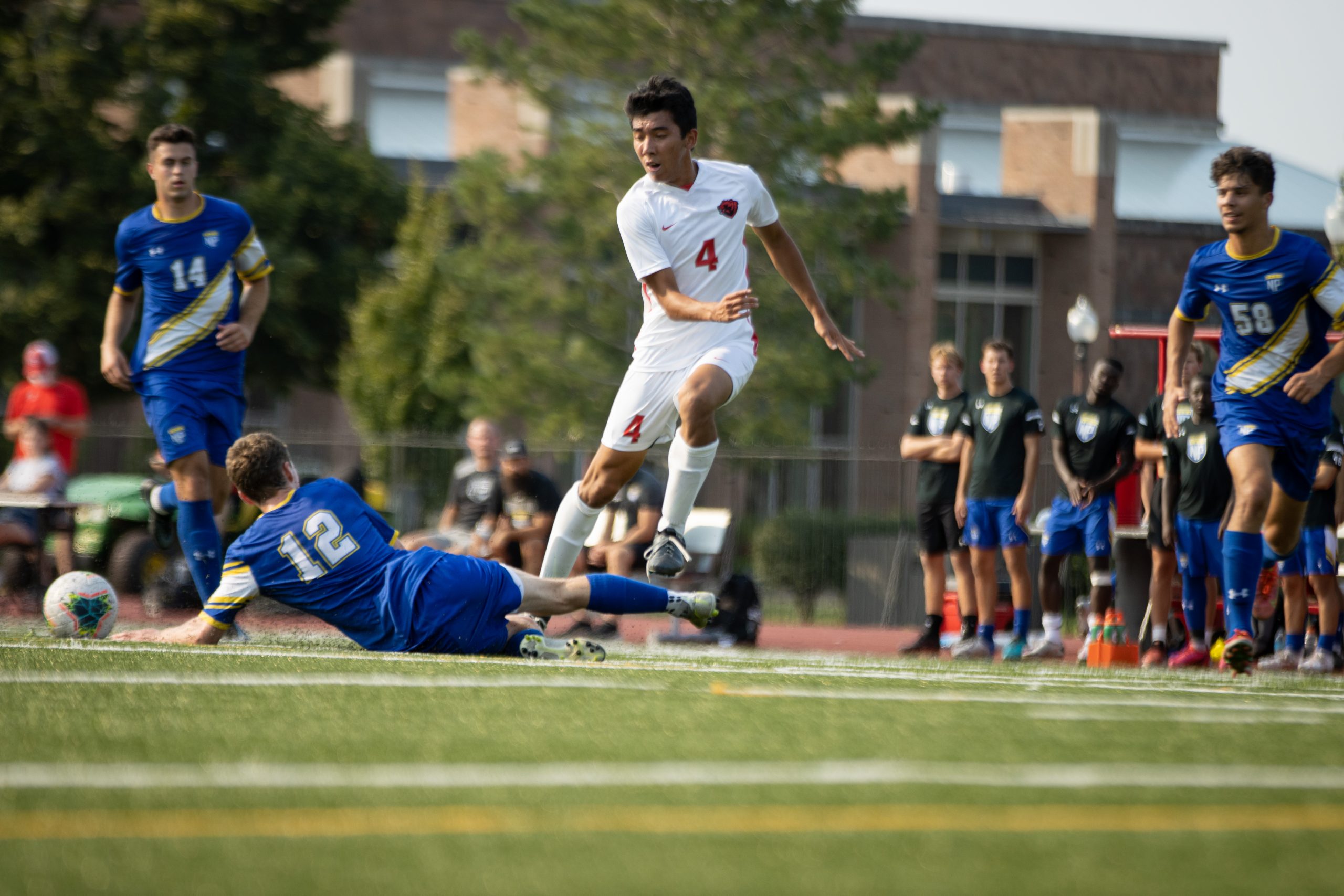 After a 2-0 win over No. 17 Rochester University Saturday, the Washington University men’s soccer team leapt to No. 9 in the most recent Division III rankings. This is the first time in recent memory that the Bears have broken into the top 25, and their 7-1 start is the best they have had since 2016.

It was a slow start for the Bears against Rochester, as they spent much of the first few minutes defending their goal from Yellow Jacket attackers. Rochester ran much of the game and registered four unanswered shots on the night, but only one of those shots, coming in the 14th minute, managed to challenge senior goalkeeper Matt Martin, and it remained as the only save Martin had to make throughout the game. A chance also came for the Bears in the 20th minute when sophomore Owen Culver found an open shot, but it traveled wide.

Despite Rochester’s shot dominance in that first half, the Bears were better at converting their chances. In the 34th minute, junior Julian Gancman found senior Michael Gemmell with a beautiful cross for his first goal of the season. Displaying some incredible touch, Gemmel beautifully headed in the ball from Gancman past the Rochester goalkeeper to make 1-0 for WashU going into halftime.

The Bears came out for the second half riding the momentum they generated towards the end of the first half; Culver and senior Arman Sanchez-Conde both pressed the Rochester defense and took quality shots in the first six minutes of the half, but neither found the back of the net. But Culver, the Bears co-leading scorer this year, was not to be denied a goal, as in the 54th minute he managed to find the top right corner with a ridiculous long range strike from outside the box to put WashU up 2-0. Assisted by junior Sergio Rivas, Culver’s second half goal brought him to five this season (tied with Rivas). Throughout the remainder of the second half, Rochester looked to bounce back, but shots in the 69th and 87th minute were stifled by an incredible WashU defense.

And despite their dominance of shots (tallying 11 on the night), Rochester only managed to register one on target on goal, a testament to the stifling defense WashU played. Martin said he was pleased with the defense’s performance against the strong Rochester attack. “We knew that they were going to be very into crossing and were going to be very physical around our box,” he said. “And we did a really good job of keeping a clean sheet and being able to control them in that area.”

WashU’s win over Rochester was led by an incredible performance by Culver, as he managed to register three shots and scored one goal. Young performers have shown up in a big way for the Bears this season after much uncertainty during COVID. “They are huge impacts to the game,” Martin said of the underclassmen. “You couldn’t ask for more from people that haven’t experienced the college level until this season.”

At 7-1, this is the best start to the season the Bears have had in the past five years, and Martin hopes that this team can break the mold of previous years’ shortcomings. “We’ve always [fallen] short when we thought we could have achieved more in previous seasons,” he said. “I guess those past seasons of disappointment really just still live on. And honestly I think that’s like one of the best motivators that we could have at this point.”

The Bears continue their slate of University Athletic Association matchups on Sunday with a critical matchup against No. 18 Emory University on Francis Field at 1:30 p.m. This Bears team is hungry to avenge the shortcomings of years past — the coming weeks will show if they are up to the challenge.

Why Sergio Rivas, who leads men’s soccer with four goals in three games, says he peaked in middle school