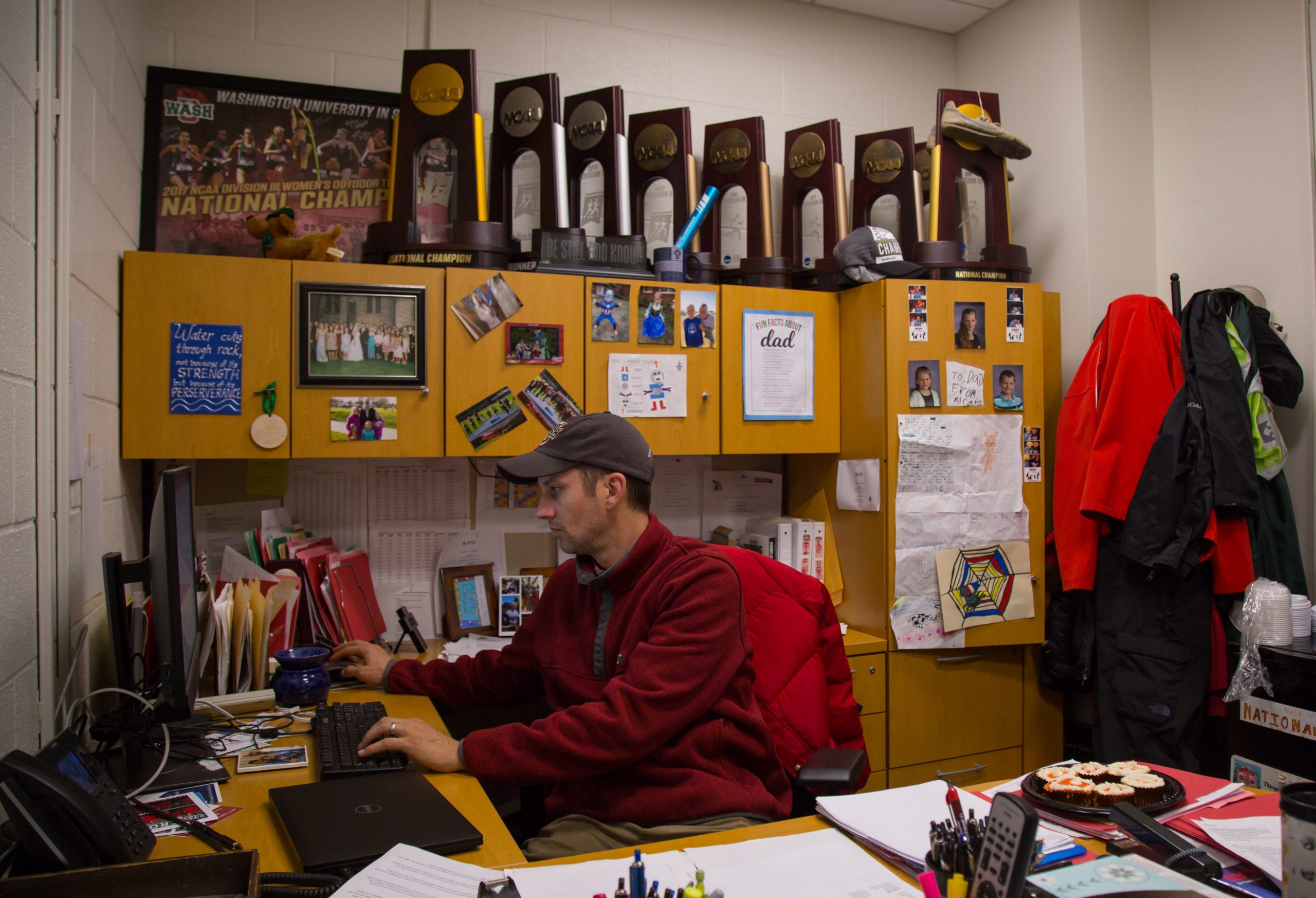 Head coach Jeff Stiles sits at his desk in the fall of 2019. The women’s cross country team is the WashU team with the most recent national championship victory. (Photo by Grace Bruton/Student Life)

It takes a special kind of crazy to run cross country. The “my sport is your sport’s punishment” line has been beaten to death over the years, but it still holds true that few would willingly subject themselves to such cruelty as a single 6 a.m. run. Quite simply, it’s hard to imagine committing to such a grueling sport.

Now consider what it takes to compete in cross country at the collegiate level: waking up early most mornings for runs, spending weekends traveling for meets and undertaking the immense task of caring for one’s body both physically and mentally. And not just to do this, but to excel at it year in and year out, takes a certain grit few possess. That is exactly what the Washington University cross country teams are doing.

Despite often flying under the radar, WashU’s men’s and women’s cross country teams have been the school’s most consistent teams in recent years. Since the senior class started college in 2018, neither team has been ranked outside the top 10 nationally. Aside from, ironically, a dip to No. 6 last week, the women have remained in the top five since 2014 (they returned to No. 3 in the most recent round of rankings). The women’s team captured the school’s most recent national championship in the fall of 2018 — before that was in 2017 from, unsurprisingly, the women’s indoor and outdoor track and field team, many of whom also compete in cross country. Head coach Jeff Stiles enters his 13th season as head coach of the Bears as one of the winningest coaches currently at WashU. Still, the teams often go unnoticed. When asked if he thought the team was underrated, senior Jacob Riderhoff chuckled. “I know it’s not the most flashy sport,” he said, “but it’s kind of something that we’ve kind of learned to accept over the years.”

Riderhoff and senior Emma Walter have a great deal to do with the team’s success in recent years; the pair consistently post top times and have emerged as leaders for their respective teams. The runners acknowledge that they might have a screw loose somewhere, but you’ll never hear them complain about the grind. Instead, entering their final cross country season, they’re looking to savor the moments with the team. “I’m excited to see what we can do and really savor the last time it’s going to be a team event,” Walter said. 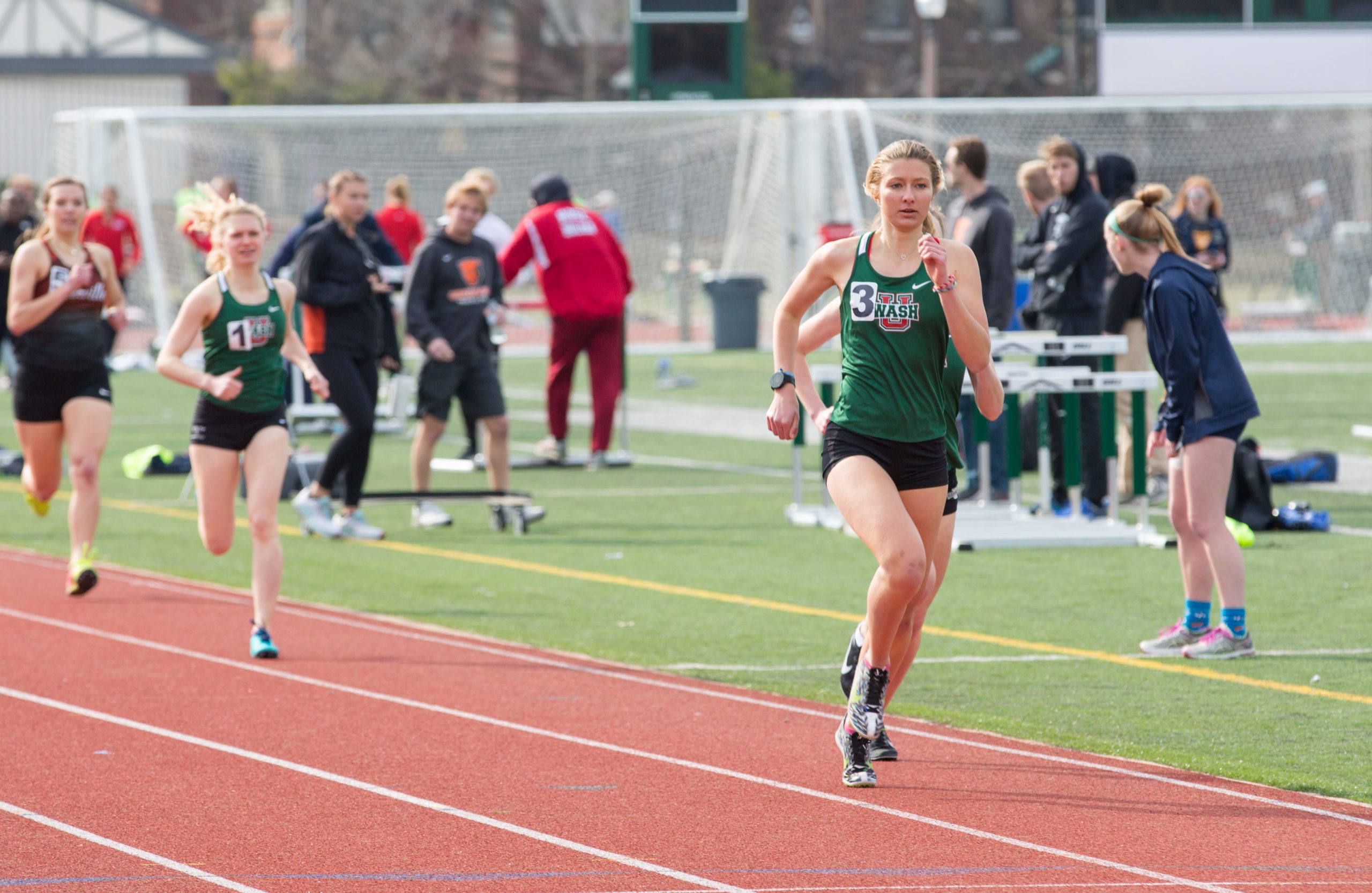 That’s something that both runners emphasized: team. The concept might not be as clear-cut as in other sports, but runners see it differently. The ability to race as a group, to run courses as a team, completely changes how runners approach their race. Running alone is far different — and far harder — than running beside a teammate who can push you. “That’s what’s so fun about [cross country] is you can kind of run in a pack,” said Walter. “It definitely helps during the race to have your teammates with you whenever it starts to get tough.” In such a grueling environment, the support that teammates offer one another, even if not technically required to succeed, can make all the difference down the stretch. Coach Stiles calls this synergy. “I think both of these groups have a really special synergy, and that’s what’s gonna make us great, if we’re gonna be truly great,” he said. “When we get to November and we’re like ‘Wow, we are so much better as a team than individually.'”

And that’s what makes it worth it. For all the excruciating runs, tough races and total exhaustion, team is what keeps these runners moving. It’s the team breakfasts after the grueling practices in Forest Park; it’s the taps on the shoulder during races to let a teammate know that they’re not alone. And through it all, they get to compete in one of the premier programs in the country.

But unlike most of the other sports on campus, the cross country team doesn’t fixate on winning every meet they compete in. Interestingly, wins and losses during the regular season aren’t so much a necessity as a gauge for where the team stands. “It’s not like football, where an early season loss crushes your season early or you beat a team and it does something magical,” Stiles said. “It really has almost no bearing on the outcome of the National Championships because you get to redo it all there.”

As long as the team qualifies for regionals, which is likely, they can use their races as opportunities to work on strategy or focus on specific goals. “Fitness, feedback and fun,” Stiles said.

“You have to work into being able to push yourself,” Walter said. Coming out of the gate hot is not as important as saving your best for the last race.

That last race — the National Championships, held in Louisville on Nov. 20 — is the one they all have circled on their calendar. And while the competitive urge still drives runners during the regular season, Walter says not having to pour everything out for each meet allows her to keep her mental and physical edge. “It’s kind of nice to not have that pressure and just be able to race and not worry about [winning] during the first few meets,” she said. “Running takes such a toll on your body, so it’s nice to be able to have a more gradual build up to Nationals.”

The regular season becomes a slow crescendo towards that date, and while rankings and wins feel good in the moment, their mindset remains set in the long term. Everything between now and then, as Stiles puts it, is a work in progress. “We talked about it before and after our first [race], we’re writing this master thesis, and this is a good first draft, but we want it to be sparkling and great,” he said. “And I think we have the capacity to do that.”

Nationals are over a month away, but the team is starting to think about those races. It’s been nearly two years since the last time they raced for a championship, and after coming in fourth and second, respectively, the men’s and women’s teams want more. “We know what we’re capable of, so it’s fun to go out and prove [it] at the end of the season,” Riderhoff said. If history is any indication, these runners will put their heads down, keep a steady pace and quietly lead WashU down the stretch.

Jeff Stiles and the construction of a cross country dynasty

‘Control the controllable’: Cross-country makes it work during COVID-19