Volleyball falls to NYU, Chicago in opening UAA Round Robin 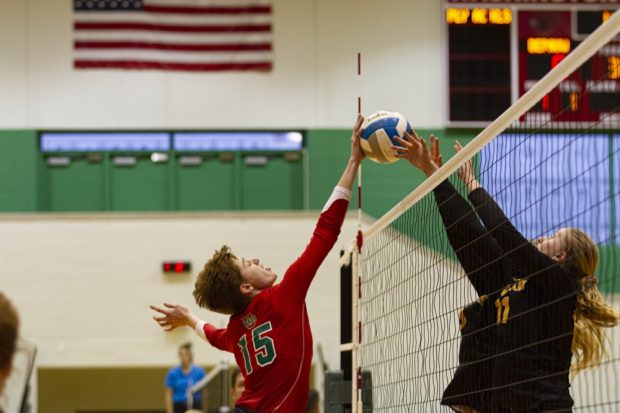 Alaina Bohrer jumps to block a shot against Centre College in the fall of 2019. Bohrer had 14 kills against New York University Saturday. (Photo by Curran Neenan | Student Life)

The No. 19 Washington University women’s volleyball team closed out the UAA Round Robin Tournament in Chicago this weekend with one win and two losses, putting their record at 7-4 on the season. The Bears swept Rochester University 3-0 in their opening match of the tournament, fell short against New York University 3-1 in their second match and nearly came all the way back in a five-set thriller against the University of Chicago, before losing 3-2.

WashU looked like the better team throughout the match. The Bears opened their first set with a 25-16 win, courtesy of several amazing kills from senior Michaela Bach, and the second set was no different. After an initial early and commanding lead of 10-2, the Bears never slowed down against the Yellow Jackets; they extended that lead further from 10-2 to 17-4 before closing out the set at 25-11.

The final set was a different story though, as Rochester made the Bears work for it and took a late 20-15 lead. But regardless, WashU got the job done. With some incredible athleticism, senior Caitlin Lorenz and freshman Jasmine Sells closed down the five-point gap and tied the game at 22 before junior Julie Keener sealed the match moments later.

An incredible performance by Bach ended with 10 kills, a team-high, while Sells, last week’s UAA Offensive Player of the Week, finished with nine kills.

The second match of the tournament saw WashU face off against NYU in somewhat of a historic day, as the Bears lost to the Violets for the first time since 2010 — WashU lost 3-1 in a four-set war.

The energized NYU squad found ways to penetrate the Bears defense all match, best captured when they turned a 7-6 lead to a 16-8 lead in the first set. Despite WashU viciously trying to close down the lead, NYU maintained it long enough to take the first set with a scoreline of 25-18.

The Bears looked like they had turned a corner in the second set, as several amazing assists by Bach and kills from junior Alaina Bohrer propelled them to a 15-11 lead and, courtesy of a 10-5 run, a 25-16 set win.

The final two sets, however, were not what the Bears hoped for. Haunted by errors, WashU tried and failed to stay close, and NYU handily took the final two sets to close out the match 3-1.

Despite the loss, the Bears had a few outstanding performances. In that match alone, Bach finished with 15 kills, followed by Bohrer with 14. The two combined for 43 kills through the first two games for WashU. Freshman Chloe Emch finished with 38 assists while junior Taryn Gurbach put up 14 digs, followed by freshman Elise Gilroy, who had 11 digs of her own as well.

In a five-set thriller, the Bears fell short against Chicago in the final UAA Round Robin match.

The Maroons looked dominant in the first two sets. After a quick first-set win, they never looked to slow down, taking an 8-2 lead early in the second set. Things never changed, as Chicago went on to take the second set with a dominant display, beating the Bears 25-11.

After two crushing sets, however, the Bears regrouped to challenge for the third one. Both teams traded leads and kills throughout the sets until the game was tied at 25-25, when some magic from Emch and Bach saw the set close with a WashU win. Emch scored the decisive point to win the set at 27-25.

The fourth set was a breeze for WashU, as several unanswered points saw them cruise to a 25-12 victory.

But as poor as Chicago looked in the previous sets, they came to play in the final one. Various lead changes throughout the set came to a 15-15 tie from which Chicago scored the much-needed two points to edge out WashU.

The Bears will look to regroup Friday with matches against Illinois Tech and Rose-Hulman tomorrow as they prepare for next weekend’s trip to Massachusetts for the second UAA Round Robin against Brandeis and No. 5 Emory.

More on volleyball from StudLife sports:

The story behind Teri Clemens and WU’s first national championship

Athlete of the Week: Volleyball senior Kirby Knapp on getting up after the sun and a fall without round robins

Volleyball comes from behind to clinch NCAA title