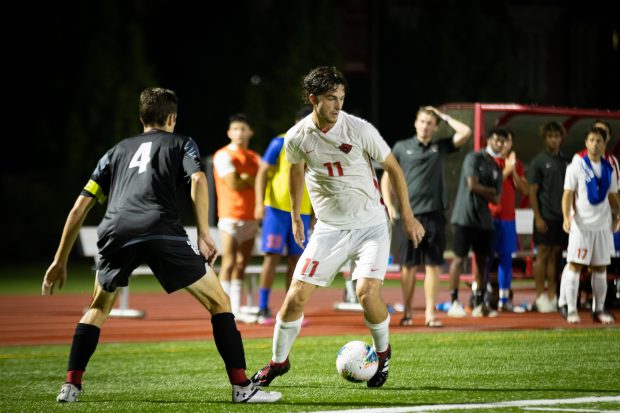 The Washington University men’s and women’s soccer teams each won their first official competitions since the fall of 2019 this week, with the men capturing two shutout victories while the women beat Fontbonne University for their first victory under interim head coach Stephanie Gabbert.

Men’s soccer team beat Rose-Hulman Institute of Technology on Saturday night through the rain at Francis Field to improve to 2-0 on the year.

Senior forward Nolan Wolf’s late goal off an assist from junior Sergio Rivas put the Bears over the edge with a 1-0 shutout victory, their second clean sheet in a week after a 3-0 win over Illinois Wesleyan University in the season opener last Wednesday.

The narrow margin of victory, however, did not capture how the team controlled the game, registering 15 shots (including seven on goal) compared to only five shots by Rose-Hulman.

WashU had several dominant performances throughout the game. Freshman midfielder Landon Green stood out among a slew of young players, tallying four shots, the most by any player on the pitch. Senior goalkeeper Matt Martin cemented the team’s defensive success, making four saves, while Wolf finished the night with the goal and two shots.

Head coach Joe Clarke had nothing but praise for the performance his players put up, but he also had “all the respect in the world” for Rose-Hulman and how they battled. “They [were] super organized,” he said. “They made it very difficult for you to play. And the way that their team was set up, they had numbers in the middle of the park.”

Yet as disciplined and organized Rose-Hulman as was, Clarke was pleased in how his team approached the game, and in turn, got the win. He was particularly impressed with Martin’s performance, noting that his punt “should have gotten [him] an assist” for the Bears’ goal, as it set up the assist that netted Wolf the victorious shot.

Clarke said the team’s depth was a major strength. Indeed, WashU benefitted from a deep lineup and bench, which allowed players to stay fresh as the game wore on. “We played 18 guys and rotated them,” Clarke said. “And that’s unusual for soccer. It’s not my style, but we have so many players.”

The team hopes that improved depth and a year away from competition will vault them to a breakout season, as recent years have seen them hover around the .500 mark and their last playoff appearance came back in 2016 (a first round loss to University of Redlands).

The Bears look to extend their record to 3-0 tonight with a home matchup against Webster University.

The women’s soccer team, meanwhile, had to wait just a bit longer to get their return to the field. After their scheduled matchup with Greenville University last Wednesday was canceled, the Bears finally ended their 21-month hiatus from official competition Saturday night with a 3-1 victory over Fontbonne.

With the victory, Gabbert picked up her first win at WashU after replacing former head coach Jim Conlon, who left the Bears in July to lead the program at Division II Grand Valley State University.

Despite the clear excitement to compete, the first half was remarkably quiet. Whether it was rust or the onslaught of heavy rain, the game remained scoreless through the first half with only one shot on goal between both teams.

The long-dominant Bears defense returns only one starter, 2019 University Athletic Association Defensive Player of the Year senior Gabbie Cesarone, while untested players such as sophomore Sarah Neltner and freshman Gaelyn Clayton fill out the back line. Still, following WashU tradition, the unit put together a strong performance, allowing just two shots the entire game (Fontbonne’s only goal came on a perfectly-placed free kick in the 76th minute). 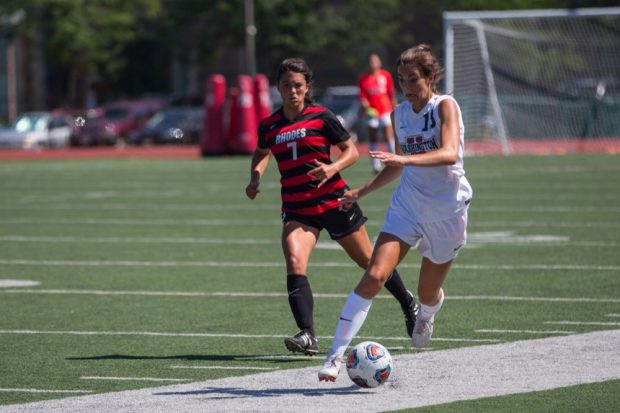 Defender Gabbie Cesarone dribbles past a Rhodes College player in a fall 2018 game. Cesarone, the 2019 University Athletic Association Defensive Player of the Year, is the only returning starter for the Bears’ defense this year. (Photo by Grace Bruton | Student Life)

Time in goal, a point of heavy competition in the preseason, was split between junior Katie Stender-Moore and sophomore Sidney Conner. Gabbert said this format will continue and that she has not settled on a single goalie.

On the other side of the ball, sophomore midfielder Jessica Greven led a surging second-half offensive performance for the Bears. After senior midfielder Jess Shapiro dropped a rainbow shot over the head of Fontbonne’s goalie to tally WashU’s first goal of the season, Greven rocketed two shots from outside the box ‒ the second from an eye-popping 35 yards out ‒ into the goal to extend the lead to 3-0. “One of the things we tell our players a lot of times is if you don’t take your shots, it’s not going to go in,” Gabbert said. “She took those opportunities and just put them in great places. Those are goals you don’t see every day.”

Greven credited her second goal to the work of fellow sophomore midfielder Anna Viscovich. “She played me the most perfect ball,” she said. “I was like, ‘this is the moment, I might as well.’ It worked out exactly as it did the last time, it went right where I wanted it to, a perfect ball.” Coming within four minutes of one another, her two goals sealed the victory for the Bears and highlighted a stellar team performance, one reminiscent of the output in years past under Conlon.

Along with the inexperience that nearly all teams are facing due to the lack of competition in 2020, this WashU team had to grapple with a head coaching change less than two weeks before their first scheduled game. Gabbert credits the seniors with holding the fabric of the team together during that time. “I just want to give a shout out to that senior class because they’ve done so much in this transition to help,” she said. “Without them going the extra mile, we would not be where we are right now.”

The team had been scheduled to play Webster University on Monday evening, but that game was canceled, so the Bears will next take the field again against Loras College on Saturday at 1 p.m. in their first Francis Field appearance since they fell in the Elite Eight in 2019.

Some of our favorite soccer stories from the last few years:

Greenfield and the unbreakable defense of women’s soccer