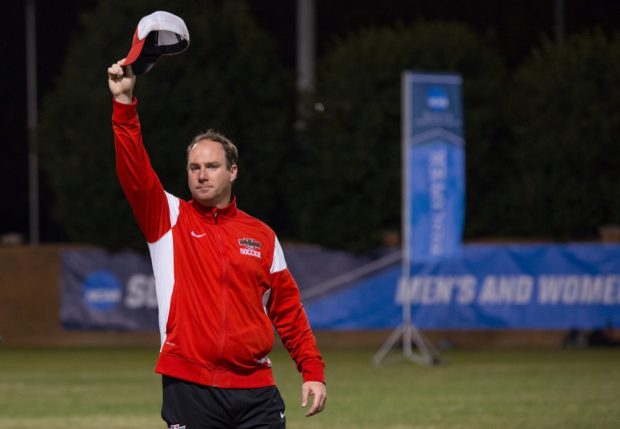 Women’s soccer head coach Jim Conlon raises his cap after the Bears’ 1-0 loss to Middlebury College in the 2018 national semifinals. Conlon coached to a .824 winning percentage over 12 seasons at the University. (Photo by Grace Bruton | Student Life)

Update as of Aug. 17, 2021 at 5:50 p.m.: Washington University has hired Stephanie Gabbert as the interim head coach for the women’s soccer team. Gabbert has been the head coach at the University of Iowa, Iowa State University and Smith College. The team’s first game under her leadership will be Sept. 1 against Greenville.

Jim Conlon had a signature saying for his players: leave the program better than you found it. Now, as he leaves after more than a decade at the helm of the Washington University women’s soccer program, it is clear Conlon followed his own advice.

He departs the University as the winningest women’s soccer coach in its history and now heads for the head coach position at Grand Valley State University after leading the Bears to 12 consecutive NCAA playoff appearances, multiple trips to the finals and the 2016 national championship.

He leaves behind a Wash. U. team that has not played competitively since the fall of 2019, when the Bears lost a heartbreaker to Pomona-Pitzer in the Elite Eight. An interim coach will lead the team this fall before the athletic department conducts a national search for a successor over the winter.

When Conlon broke the news to his team, he did not speak for long. He conveyed the news to his team through small Zoom squares and then, overwhelmed with emotion, allowed Deputy Director of Athletics Chris Peacock, the administrator who oversees women’s soccer, to explain the timeframe of the new changes.

The call came “as a total shock,” to senior Kally Wendler—no one expected Conlon to leave. At the same time, the players expressed excitement for their coach’s future.

“There was the shock of hearing it, but there was also a lot of gratitude and appreciation,” senior Gabbie Cesarone said. “You could tell people were still really excited for this opportunity for him.”

[From the fall of 2019: Our profile of Conlon after he notched his 200th career win]

Conlon took over the women’s program in 2008 as the third women’s soccer coach in team history. Since then, he coached to an astounding .824 win record and nine University Athletic Association championships. His crowning achievements include the first National Championship in program history and two runners-up finishes in 2009 and 2015. He also coached 20 all-American players in his career, a testament to his strength both as a coach and as a mentor.

Conlon moves to a program where his work to leave the program better than he found it will be cut out for him. The Division II national champion in 2019, Grand Valley went 25-1 that year, scoring 117 goals while allowing just 10.

The legacy he has left behind has been one that personifies the Division III athlete experience: of school, soccer and social—in that order. Yet his presence even superseded his role as simply a coach, getting to know his players outside of a soccer context. The team got to know him through a relationship that “truly transcended soccer,” Wendler said. “He’s a wonderful coach, but he’s an even better person because he really tries to make us feel like we have a family away from home.”

Cesarone echoed her teammate, mentioning “the random calls just to check in,” or how Conlon’s “what can I do for you?” attitude supported players beyond the field of play. “I always knew if there was ever anything I needed, I could call him and he would pick up,” she said.

In Conlon’s absence, the team will attempt to live up to the high standard that he set throughout his tenure. “The expectations are very high for this program because of the success that was created by Coach Conlon,” Peacock said.

The administration has various concerns about the fall, including the fall recruitment cycle for the class of 2026, but taking into consideration the timeline, they felt that an interim coach was the best course of action. The ideal candidate, Peacock said, will be “someone who can carry on the level of success but really will help with the transition of this extraordinarily difficult time for the team that didn’t get to play a regular season.” When the hiring committee decides on finalists, team members will be part of the hiring process.

Despite the coaching change, the Bears will still play their first game in less than a month, on Sept. 1 against local rival Greenville. The seniors on the team are hopeful that the transition will be smooth thanks to Conlon’s strong leadership. “It puts us in this unique and great situation where we can use the pillars he created for the program and shape them in our own unique way,” Cesarone said. With a packed schedule on the horizon, the team looks within to its senior leadership to maintain that stability for the “young class that’s chomping at the bit to play,” as Cesarone described them.

The fact that only half of the team have played a complete season hangs an exciting yet imposing question mark over the team’s upcoming season.  For the team members though, it is mostly exciting. “Regardless of who we’re calling coach, I think everyone’s just excited to be back out there and just grateful that we’re not being restricted by the virus anymore,” Wendler said.

Want to cover Wash. U. sports like women’s soccer this fall? StudLife is looking for new sports writers. You can fill out our interest form and we’ll be in touch!