‘The story of the World Series was just the missed opportunities’: Baseball ends historic season with a loss in Final Four to St. Thomas

Coming into the Division III World Series, Washington University baseball head coach Pat Bloom predicted that only one team would leave Cedar Rapids, Iowa happy. After the Bears bowed out in the Final Four, a historic finish at their first World Series, they were not the team heading home satisfied. In the wake of elimination, Wash. U. is left to reflect on the two heartbreaking losses that were determined by mere inches: a ball sailing over a glove into the outfield, a runner tagging the bag a second too late, a pitch thrown just outside of the strike zone.

Part of what made the Bears’ loss especially devastating was the wide margins of their wins coupled with close losses in the final innings of play. Wash. U.’s offense came together in their initial win against Johns Hopkins, outscoring the Blue Jays 9-3. The Bears also beat Adrian in their third game 16-5, able to close out their dominant performance with junior Matt Lopes pitching an untouchable 2.2 innings in his first outing of the year.

Yet ultimately, what allowed for the Bears’ elimination was the team’s inability to close out innings to stifle opponent St. Thomas’s strong offensive surge in the final minutes of the games. Wash. U. played St. Thomas twice, first in what junior shortstop Caleb Durbin called a “barnburner of 12 innings.” The Bears had an opportunity to end that game after Durbin hit a long two-run home run in the top of the 11th, but pitcher Jared Fong was unable to record the final out to end the inning. The game continued, allowing the Tommies to surge back to victory 8-7.

Again in their second matchup on Sunday afternoon, the Tommies showed their prowess at situational hitting. They consistently poked well-placed balls through the Wash. U. defense.  “It’s tough when your pitchers are doing the best they can. They were hitting their spots, but [St. Thomas] hitters were just finding a few more holes in our defense than we were able to for our offense,” first baseman Bo Anderson said. St. Thomas was able to score three runs in the ninth inning for another come-from-behind win, with a 6-4 final score.

“The story of the World Series was just the missed opportunities, of not closing the deal when you have leads late,” Bloom said. “We certainly are disappointed that we didn’t seal the deal with the two losses that we had, because we were certainly in the driver’s seat late, but at the same time, our kids never quit. They just showed tremendous fight and resilience, and that’s what I’ll remember.”

Part of that resilience came from the freshmen class, who stepped up in a key moment for the team as the lineup shuffled after injury. Senior Henry Singer came to the plate in the first inning of the second game after having a big impact in the first matchup against Hopkins. He tried to bunt the second pitch thrown, but it ricocheted off his bat and slammed into his hand, breaking his finger. The coaching staff was forced to improvise without their veteran outfielder and second hitter. Bloom cycled through a few different players before settling on Magnus Dunn, a freshman who had previously been at bat seven times total for Wash. U. 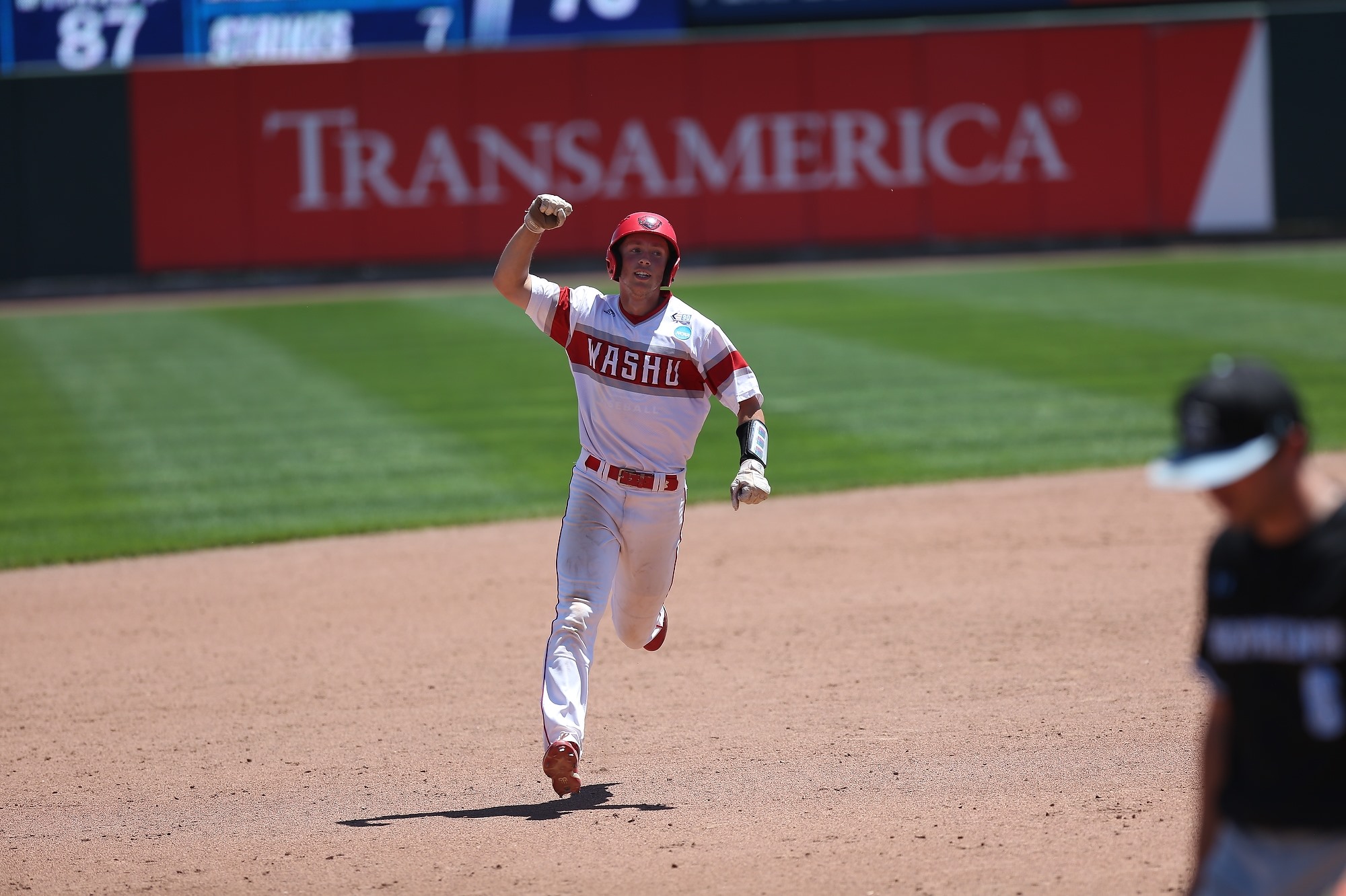 Senior outfielder Henry Singer runs the bases this weekend. In his last complete outing for the Bears before breaking a finger Saturday, Singer had two RBI in three times at bat. (Photo courtesy of Melanie Schaefer / WUSTL Athletics)

Despite his inexperience in the starting lineup, Dunn had six hits and four runs in only three games after not recording a single hit in the regular season.  Similarly, freshman Clayton Miller pitched an important five innings against St. Thomas in the second game, allowing just one run. He also excelled offensively, landing seven hits and five RBI during the World Series. In the most pressure-filled environment imaginable for the underclassmen, the first-year class demonstrated how much they could contribute when given the chance.

“I think that a silver lining in this World Series was just seeing the way that some of our freshmen competed and played after having minimal time this year,” Bloom said. “They’re definitely bright spots in our future, showcasing what things might look like ahead for our program.”

Ultimately, the Bears’ World Series bid was not just about the players on the field. It was also about who gathered around them: Wash. U. families and baseball alumni, cheering until their voices gave out. 2017 graduate Jake Mintz drove 16 hours from New York City to Iowa, while others traveled from Seattle, St. Louis, Washington D.C. and Houston. The reunion at Veterans Memorial Stadium represents the legacy that Bloom has left—even after graduation, former players are still engaged with Wash. U.’s baseball program.

The alumni rode the ups and downs of the game from the stands, and the final game against St. Thomas was “hearts in your throat, no exception,” Mintz said.  As someone who knew the emotions of being on the field, he said it was almost harder to watch from afar. “I felt so much more of the emotional roller coaster as the fan,” he said. “You’re just completely tied to the whims of the role of the game you have no hand in.”

Regardless of coming short of a national championship win, that Wash. U. competed head-to-head with the best teams in the nation is a mark of how far Bloom has brought the program. “We know that we’re capable,” Durbin said. “It’s not at the point where we’re trying to prove ourselves as one of the best teams.”

Mintz, who hosts a D3 Baseball podcast and reports on baseball for MLB on Fox, agreed that this performance has put Wash. U. baseball on the map. “The Bears deserved, undoubtedly, to be in the World Series. It wasn’t even a question,” he said. “But you’re curious, like, how do they stack up? And they could have won the whole thing. It wasn’t a fluke, right?”

So despite the heartbreaking final innings, the Bears have come home knowing that they have taken huge steps for the program that will carry forward for years to come. “We competed our butts off. That’s all you can really do, sometimes, in baseball—the best team doesn’t always win in sports in general,” Durbin said. “I still feel like we had the best team, but we made it far. Sometimes it just doesn’t take you the whole way.”

Look back on a historic spring for the Bears: