The team will take on Adrian College Sunday morning 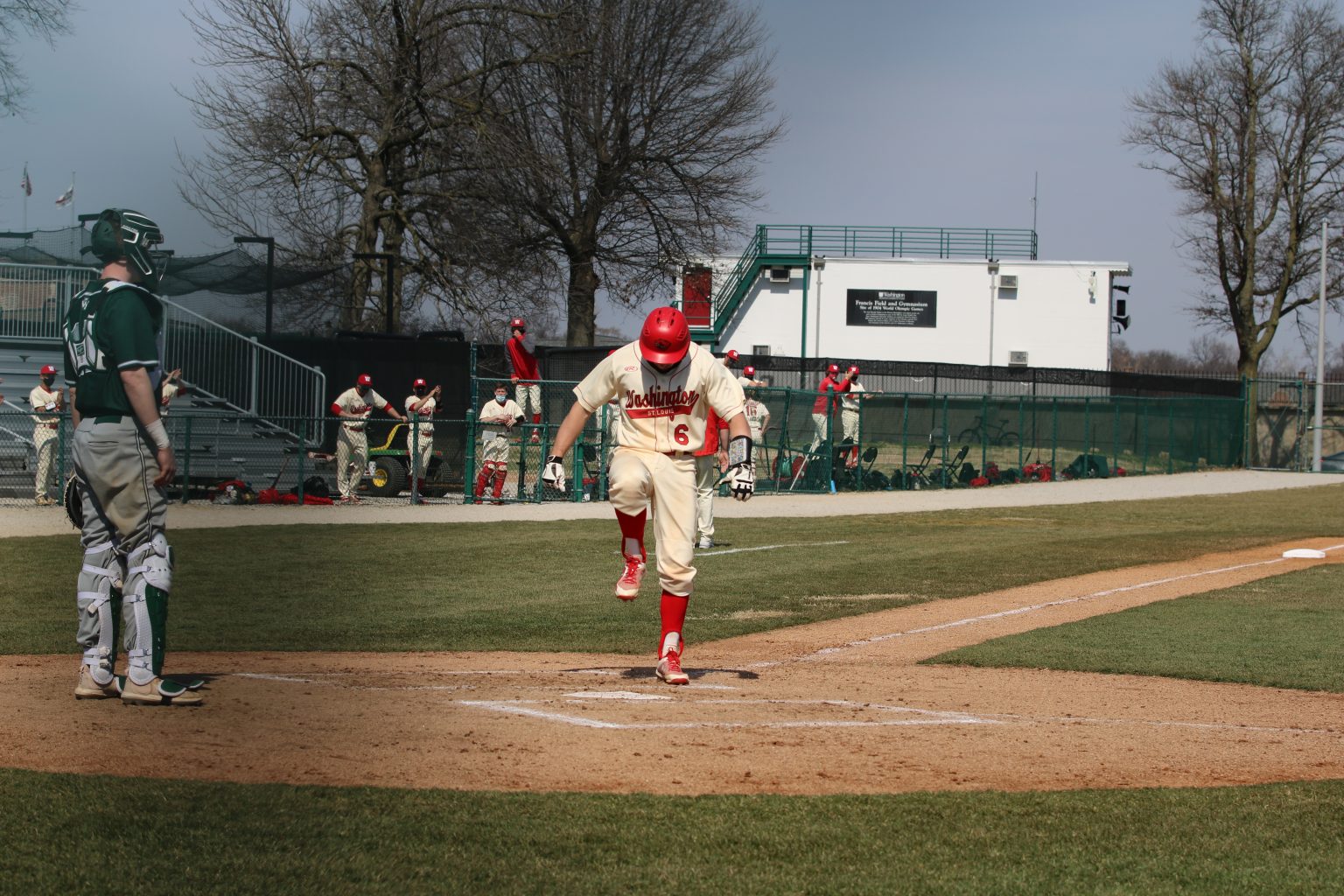 Update as of 11:33 p.m. on Sunday, June 6: Despite a decisive victory in the game against Adrian College, the Bears were stymied in their quest for a Division III World Series championship by the St. Thomas Tommies in the second game Sunday. The teams battled for nine innings in up-and-down play that highlighted both team’s strengths.  Yet once again, the Tommies were able to come back from a one-run deficit to claim the victory, this time scoring three runs in the ninth inning to win, 6-4.  The Bears head home as one of the top four teams in the country, the highest finish in program history.

The Washington University baseball team came out of the first round of their first-ever Division III World Series carrying considerable momentum. After a six-run eighth inning to grab a 9-3 victory over Johns Hopkins University Friday, the Bears started their Saturday play aggressively, with a solid victory behind them. Yet after battling against the University of St. Thomas for twelve innings, Wash. U. ultimately fell 8-7 for their first loss of the double elimination tournament. The Bears play Adrian University in an elimination game Sunday morning at 10 a.m. central and will now need to win twice before reaching the championship series.

The extra innings loss to St. Thomas showcased both strengths and downfalls of the Bears as they battled against the well-matched Tommies.  The Tommies scored first, but Wash. U. answered with three runs in the second inning. From there, the game seesawed dramatically. The score rose to 4-3 in Wash. U.’s favor in the bottom of the fourth inning, but nearly every time the Bears crossed home plate, St. Thomas retaliated in the next inning. The score was tied at five after seven innings.

All game, it was a battle of pitching combined with mounting a strong defense in the minor league-sized Veterans Memorial Stadium. Senior Troy Bauer led off the pitching for the Bears, before being replaced by sophomore Kyle Coates for two innings. Senior Jared Fong took over the mound for four innings before senior Tim Tague came on for the 12th. And while the Wash. U. pitching was able to get out of some high-tension spots in the first half of the game, the pitchers struggled to close out innings when it mattered.

Shortstop junior Caleb Durbin brought the score to 7-5 in the 11th inning with a two-run home run, and Fong had the Tommies on the ropes in the bottom half of the inning, but St. Thomas’s Jake Porter doubled to right center to tie the game up yet again. In the 12th, Tague struck out two batters before St. Thomas’s Matthew Enck doubled, driving in the winning run for an 8-7 walk-off win. After four hours and 22 minutes of play in the 90 degree heat the Bears returned to the dugout exhausted, having battled for every inch out on the field and having come up just short.

Wash. U. may have lost this afternoon, but they still have a chance at redemption. They play Adrian College tomorrow morning, a team with a 37-9 record. Both teams have one regular season common opponent, as both have played Spalding University this season. Adrian lost to Spalding 8-1, while the Bears have swept them in all four matchups. Both teams have fallen to St. Thomas in the tournament. Yet the Adrian Bulldogs have had a strong showing so far, playing gritty games in the regional tournament and beating Hopkins this morning 12-9.  Both teams come into the play tomorrow in a high-stakes situation with one loss apiece, meaning that whichever team loses will be eliminated. The winner will go on to play St. Thomas on Sunday afternoon, who will have the additional advantage of not having played a game that morning.

You can follow along with Student Life’s live coverage of Sunday’s games on Twitter @studlifesports or watch live.

‘For the longest time, it felt like we couldn’t lose’: Baseball squashes Wartburg to finish regular season 28-3