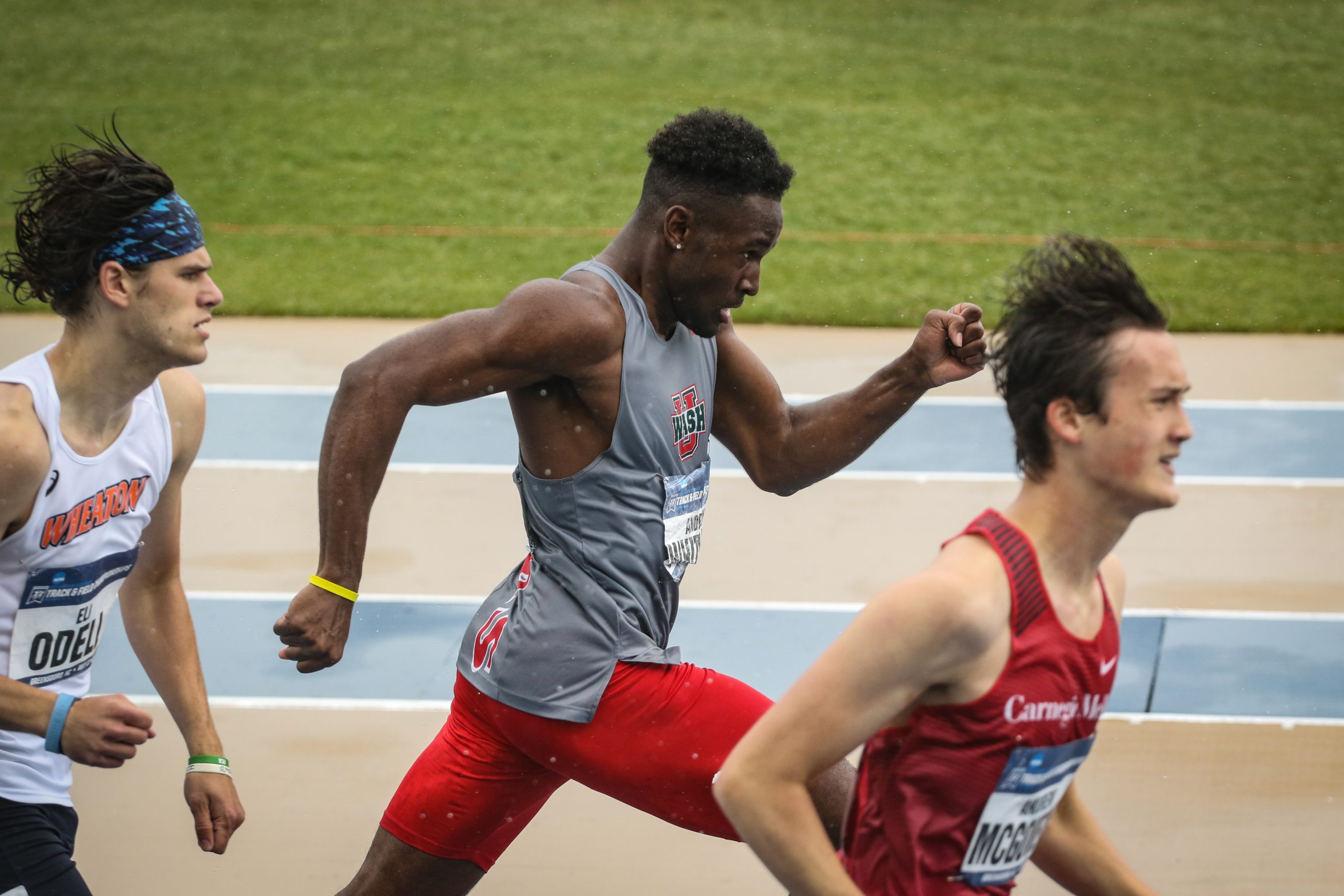 Junior Andrew Whitaker powers his way to an eighth place finish in the 400 hurdles. “Andrew is the heart and soul of the team,” head coach Jeff Stiles said. (Photo by Clara Richards | Student Life)

The Washington University track and field team captured eight All-American finishes at national championships in Greensboro, N.C., last weekend, but both the men and women finished outside the top 10, as the men came 16th and the women 59th.

The national championships brought a melancholy end to what has been an irregular season for the Bears as they competed through Covid-19 restrictions and raced against non-University Athletic Association competition when they were not able to travel nationally.

“It was a hard weekend as a whole, because so many kids were so close to being really excited about what they did,” head coach Jeff Stiles said. “And the reality is that a lot of them did really well but weren’t quite there.”

Thursday and Friday’s preliminary events concluded with eight Bears advancing to the finals and the others achingly close to making the finals.  The women’s 4 x 400 relay finished ninth, one spot away from progressing.  Junior Aofie Dunne finished .56 seconds away from qualifying for the finals in the 800 meters, while freshman Emma Kelley finished 11th in the same event.

On Saturday, the finals day, the Bears had seven entries in six different events, headlined by the 4 x 400 meter relay that came into the preliminary competition with the top seed time.  There were a few standout performances, with Ridderhoff running to second place in the 1500 after getting jostled out of his stride in the last 200 meters of the race. Freshmen Will Houser and Alex Djetto were all able to gain valuable experience, finishing as all-Americans in their events.

For many Bears though, their individual performances did not go as planned.  Defending outdoor national champion senior Eka Jose was eliminated in the preliminary round of the triple jump, and other athletes hoped to finish closer to their personal bests. “I think there were a lot of performances that people had where they wanted something more—like they wanted to do better,” Ridderhoff said. “So that was a little tough to see because I knew what my teammates were capable of.”

Still, Stiles found many highlights in the meet. Freshman Emma Kelley split an impressive 56.1 as the anchor of the relay, and junior Michael Ly ran “probably the best race of his life” to finish 10th in the steeplechase, Stiles said. Granted, making the event finals itself is an enormous accomplishment, meaning that the student-athlete is in the top eight in the nation for their event. Yet the Bears have historically had incredibly strong performances at the national meet as a team, the women finishing in the top three for the past five years and men having a 10th place finish in 2019.

“The reality is, we’ve been spoiled the last six years. We’ve had a historic run at the national championships with both teams finishing so well,” Stiles said. “We kind of got spoiled into expecting it.”

Even though the team finish may have been disappointing, the team returns 14 out of 19 NCAA qualifiers next season. That experience, Stiles said, will be huge. “We lost some really key pieces. But there’s a young group under them that has the capacity to be really special. So I think that that experience will be enormous.”

One other unexpected highlight for the team was the opportunity for the runners to spend time together—something that they have not been able to do all season. The team support, Ridderhoff said, was refreshing after the isolation of training in pods. “I think it honestly might have helped with some performances this weekend, because we didn’t feel as lonely or as separated as we have been in the past,” he said.

It was a quiet 12-hour bus ride back to St. Louis, the team leaving North Carolina at 8 p.m. and driving through the night.  Yet when they pulled into the loading dock at Wash. U., senior Julia Dannenbaum—a pole vaulter who would have been a national title contender but missed qualification by centimeters—was waiting to greet the team. Dannenbaum is just one example of the impressive legacy that this year’s seniors have left on the Wash. U. track and field program. “Even though it didn’t end like they wanted, [the seniors] represented how you carry yourself when things don’t go well,” Stiles said. “You have to celebrate the success of others and also stand by your teammates in disappointment.”

Stories from the spring of Wash. U. track and field: