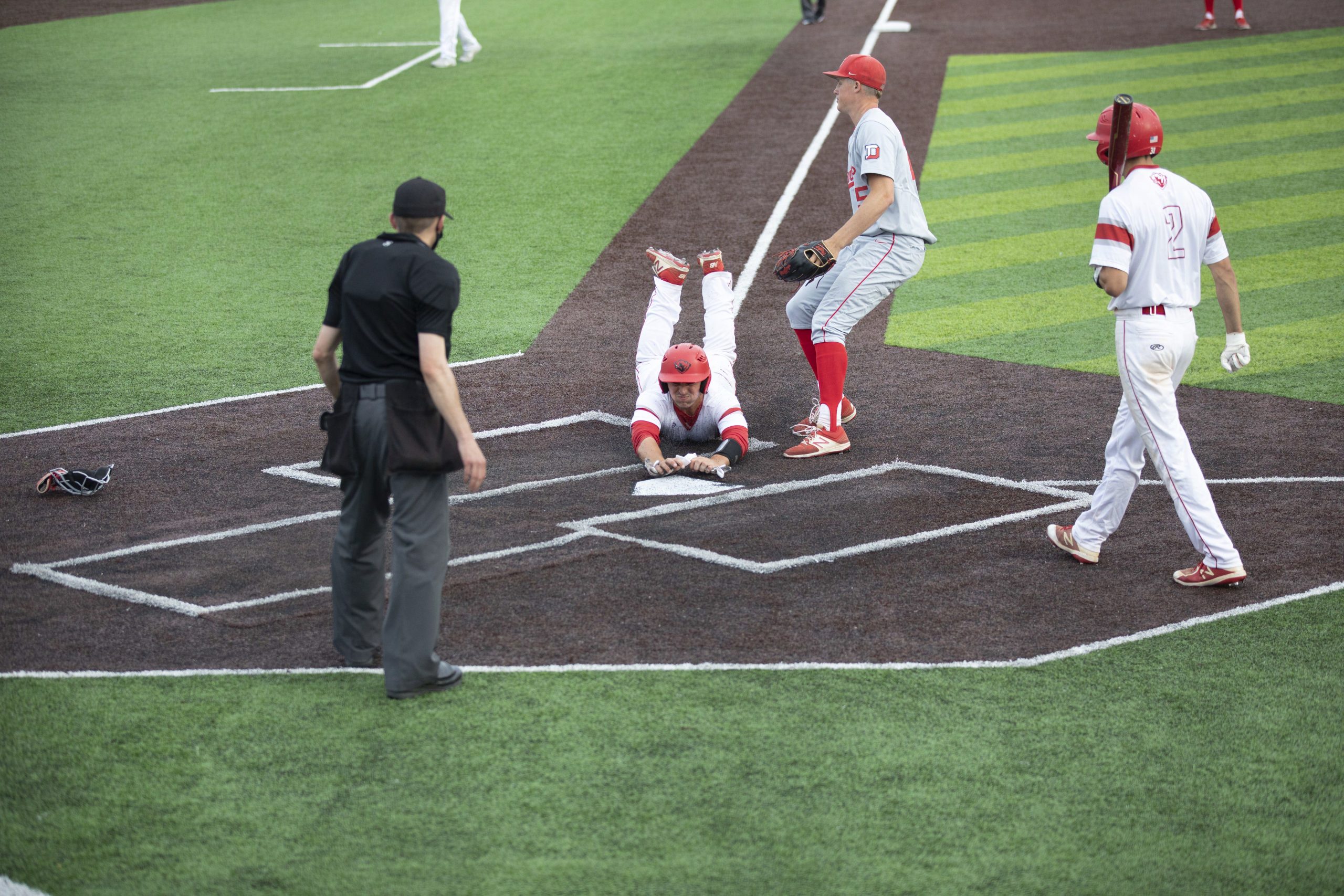 Senior Collin Kahal dives into home plate during the Bears’ 2-0 victory over Denison Sunday. Wash. U. will take on Johns Hopkins in the first round of the world series Friday. (Photo courtesy of Melanie Schaefer/WUSTL Athletics)

Update as of 4:14 p.m. on Friday, June 3: The Washington University baseball team won its first game of the Division III World Series on Friday, 9-3 over Johns Hopkins University on the strength of a six-run rally in the bottom of the eighth inning. The Bears will take on the winner of Friday’s Adrian vs. St. Thomas game on Saturday at 1:15 p.m. You can follow our live coverage of the game on Twitter @studlifesports.

After pitching seven and a third innings in the Bears’ second Sunday matchup against Denison University, Jared Fong retired from the mound with an acute sense of déjà vu. The exact same scenario—Fong being replaced by the team ace late in a regional championship game—happened in 2019 to disastrous results. That year, senior starting pitcher John Howard allowed a game-deciding home run in the ninth inning that ended the Bears’ playoff run, a heartbreaking finale to their season. So this year, Fong left the mound thinking about “the curse” of the 2019 game, he said. “A moment like that sticks with you forever.”

But instead of freezing under the pressure, starting pitcher Ryan Loutos took the mound of the regional championship tiebreaker with his trademark calm and focus. While Fong was thinking about two years prior, Loutos was concentrating on the task at hand. “I threw a few fastballs, and my arm was feeling good. I was like, ‘You know what—I think this is our shot. This is our time.’ And thankfully, it was,” Loutos said. Even with runners on first and third, he closed out the eighth with the same composure that has produced his 11 wins this season.

When the final out landed in catcher Hunter Goldberg’s glove to cement the 2-0 win, Loutos’ calm demeanor finally broke. As he rushed to embrace his teammates, a season’s worth—perhaps a career’s worth—of restrained emotion finally poured out of the ace. The goal that he and the Bears had dreamed of for so long finally materialized in front of them. Within seconds, the entire team swarmed around him, dogpiling on top of one another and tossing their hats in the air. Afterwards, the players stayed on the infield soaking up the victory for so long that the coaching staff had to pull them away to make the drive home. “Words can’t really describe it,” Fong said. “There’s no better feeling in the world. It was hard for me to hold back just tears of joy at that point.”

Loutos’s final out was so significant because, for the first time, the Bears won the regional championship and advanced to the Division III World Series. After a regional tournament complete with upsets and surprises, Wash. U. has made it further than ever before.

The team’s local rival, Webster University, was ranked third in the nation coming into the weekend and put in the same regional bracket, but the Gorloks were eliminated by unranked Denison before even facing Wash. U. The Bears were able to stay in the winners’ bracket all weekend until a loss in Sunday’s first game against Denison, avoiding the doubleheaders that an earlier loss would have entailed. That early success gave the Bears the advantage of having played fewer games than Denison before Sunday.

Still, the unfamiliar Denison played aggressively throughout the tournament, shutting out Webster and beating the Bears 14-10 in the first matchup on Sunday. “We really fought it out in that second game as a tie game. The bats weren’t working as they usually were. But that was okay—we scratched a few runs [in the tiebreaker], and they were the few runs that we needed,” said junior first baseman Bo Anderson, who had two clutch hits and the only RBI in the tiebreaker.

In addition to a team first, the regional win and trip to the World Series are also significant because this is head coach Pat Bloom’s first full recruited class of seniors. “It meant an awful lot in terms of the growth and development of our programs since our coaching staff came on board,” Bloom said.

The tournament is held in Cedar Rapids, Iowa, and the Bears will face off against Johns Hopkins University on Friday for their first game. Recently, the NCAA has implemented a seeded bracket that puts more emphasis on the regular season resumé of the teams competing. Hopkins holds a 15-4 record and were listed as the “dark horse” by D3Baseball.com in their regional competition. The Wash. U. players are excited to play a team that used to be University Athletic Association competition in a matchup that feels like a “fitting way to start the World Series,” Loutos said.

Throughout the tournament, Wash. U. will face stiff, experienced competition, and they are the only team in the tournament who has never competed for the national championship. Bloom himself has coached a team to the World Series on four occasions during his time at University of Wisconsin-Stevens Point. While it has been eight years since his last World Series bid, he has taken away a few important lessons from those trips: the players can’t put too much focus on the end result, and they have to be ready for every team’s very best shot.  “Now’s not the time to try to be something that you’re not,” Bloom said.  “We just have to do what we do a little bit better.”

Bloom has acknowledged the huge challenge ahead for the team. This week, he will be making sure that the pitchers get back to their regular cycle and rotations, keying into situational hitting and watching live streams to strategize prospective lineups. “I’m expecting a battle every game, just being ready to fight for every pitch and every 90 feet,” he said.

This year, the Bears have shown that they can perform in high-pressure situations like the tie-breaker against Denison, so despite their relative inexperience this far into the postseason, the players are confident going into this weekend. “When we’re at our best, we’re one of the best teams—if not the best—team in the nation,” Anderson said.

Ultimately though, they are going into this weekend feeling like they have very little to lose. “Our goal is to win a national title, but at the same time, if we put too much pressure on ourselves, we’re just gonna struggle,” Loutos said. “The pressure’s off now. This is the fun part—and it’s true, now we’re at the point where we just get to go out and play loose and just have fun.”

The path to the World Series:

‘For the longest time, it felt like we couldn’t lose’: Baseball squashes Wartburg to finish regular season 28-3