After a comeback victory in the tournament's second round, the Bears could not muster another in the third 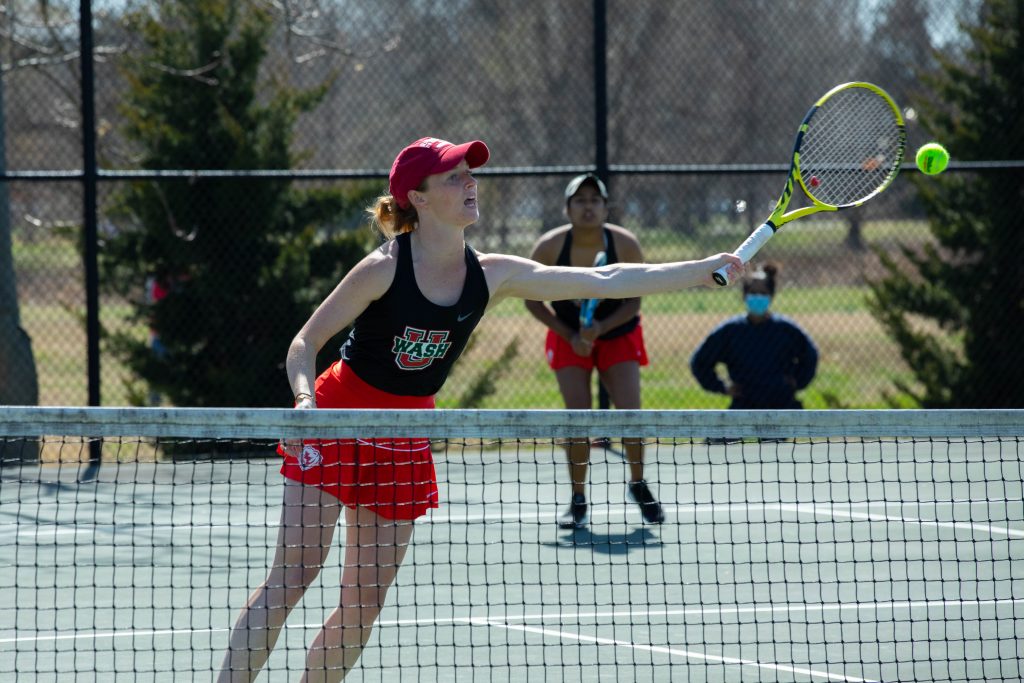 Senior Laurel Wanger hits a shot close at the net against DePauw University in March. “This is a team with a lot of heart and a lot of fight,” head coach Paige Madara said. (Photo by Bill Ford | WUSTL Athletics)

By the time junior Hannah Johnston battled through her third set against the University of Texas-Dallas last weekend, the Washington University women’s tennis team’s hopes rested on her and freshman Karen Gao. The Bears were losing in the second round of the NCAA Division III regional tournament. The team would advance to the next round if Johnston and Gao both won their matches, but if either player lost, Wash. U. would drive home reflecting on their shortcomings.

Despite being down three match points, Johnston clawed her way back from the looming defeat to narrowly win the third set. Afterward, instead of sitting down and recovering, she screamed herself hoarse as Gao won the third set of the last match to take a narrow team victory, 5-4. After they clinched the win, the whole team celebrated on the court together, the seniors sobbing on the court with their team. “Those are the matches that we love to play,” head coach Paige Madara said this week. “What made it such a special atmosphere was that everyone was a part of that win for us.”

That hard-fought win was the Bears’ last, as they fell, 5-1, to a strong Southwestern University team in the third round. Southwestern swept the three doubles matches, and Wash. U. could not mount enough of a comeback in singles to capture the victory. After earning an at-large bid to the competition, the team ended Madara’s first postseason run with the Bears at the Sweet 16 round.  But even with the loss, their win in the second round was a confidence boost for the team, which was forced to adjust after the departure of Kelly Stahlhuth, who left last summer after her 16th season.  “It was a very special experience for those Bears to see that they belong. I knew that I believed in them and knew that they belong,” Madara said.  “It was cool to see that belief shine through in their eyes too.”

While the matches marked Madara’s first trip to the postseason as the Wash. U coach, Madara had competed in the NCAA tournament as a Bear herself.  Coming back as a coach though, she realized that as a student-athlete, she had taken that trip to the national competition for granted.  “To know how hard we worked to come together this year as a team—it’s not something you get every year, and you definitely have to earn it,” she said.

Despite learning under Stahlhuth, Madara came to the team with a slightly different coaching style from her predecessor. She gives her player more direction, occasionally even hitting with the players at practice. With the challenges this season, she’s been even-keeled despite the constant changes in schedule and guidelines. “It’s very comforting as a player and as a captain because it’s easier for me to feel like the team is at ease when the coach has a poker face on even if something did freak her out,” said senior captain Ally Persky.

This was the Bears’ first time in the postseason since 2018, where they were defeated in the second round of the tournament. Senior captains Persky, Laurel Wanger and Emma Sass had the responsibility of communicating the importance of the postseason play, being the only ones who had been on the team. Despite the honor of being selected, Wanger described the mid-week travel as a “double-edged sword” during exams.  Having had that prior experience, the seniors held a captain’s meeting to mentally prepare the rest of the team about logistics and lift their teammates’ spirits during the stress of exams. “People were anxious to get home—hearing that you’re going to stay and play tennis, especially if you’re not on in the lineup, can be a drag to wait around for alone,” Wanger said.  “We wanted to reiterate how important of an opportunity this is, not only for us specifically but for Wash. U. in general.”

The team finished the year with a 9-4 record, with an eight-game win streak in the middle of the season. The tennis season is not officially over until the individual tournament, where Persky was selected as an individual and as a doubles competitor with Gao. But the team has officially stopped practicing, leaving Madara to reflect on her takeaways from her first season back at Wash.U. And despite the loss at the third round of the postseason tournament, she sees a lot of upside in the team’s performance. “They didn’t give up to each other; they said, ‘We can do this.’ We were very close to pulling off five singles matches,” she said about the team’s defeat. “That was really cool to see that we may be down, but we’re never out. This is a team with a lot of heart and a lot of fight.”