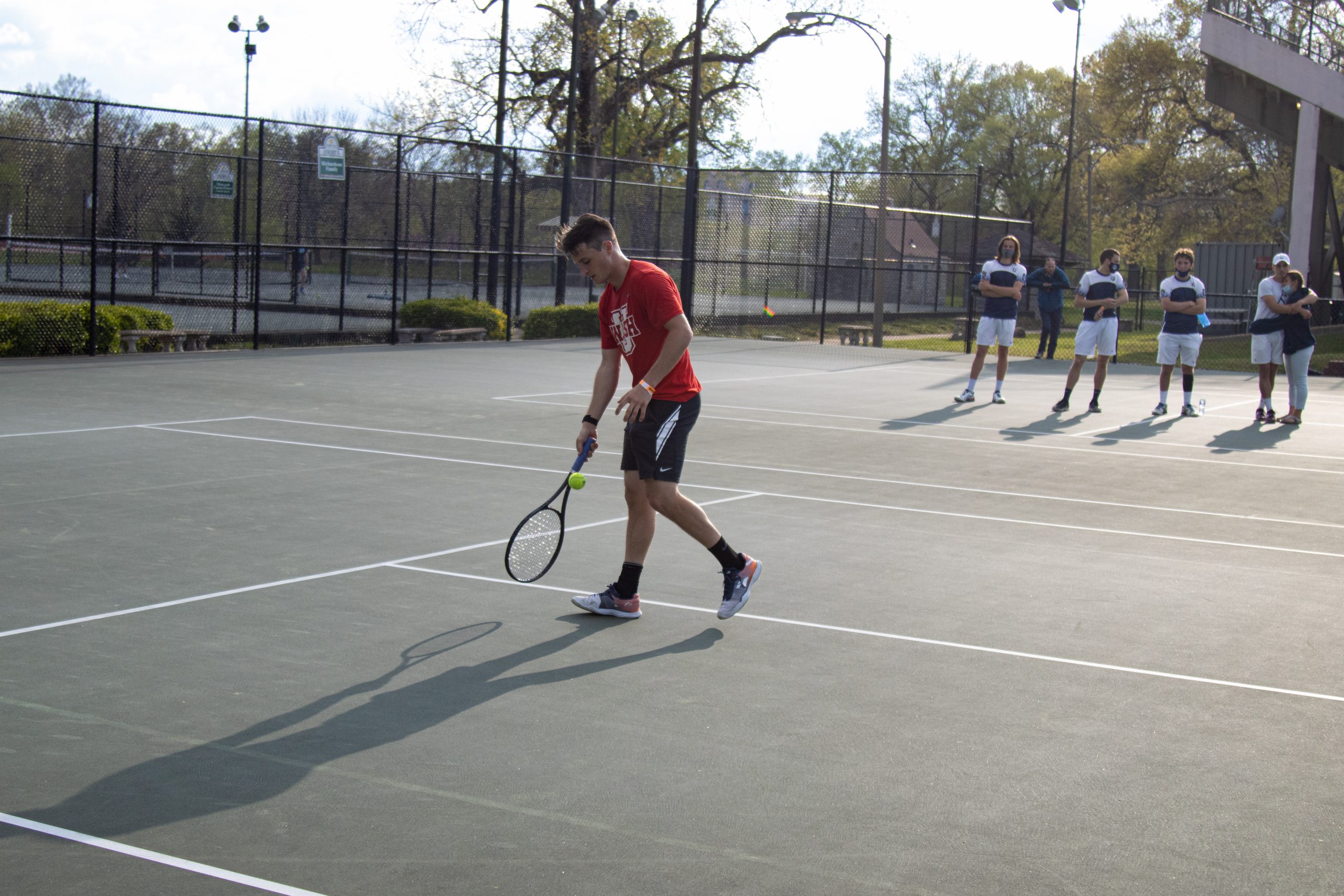 Graduate student Scott Altmeyer walks to the baseline during a singles match victory against Principia College, April 17. The Bears have a first round bye in the NCAA regional tournament this weekend. (Photo by Curran Neenan | Student Life)

At 1 a.m. one night this year, junior Luke Smith sent an out-of-the blue text to the Washington University men’s tennis group chat. “Boys,” he wrote, “This year is the year.” And while his teammates may have dismissed him initially, ignoring Smith’s early morning text, that message prophesied the team’s incredible success so far this season. The men’s tennis team capped off the regular season with an 11-1 record, losing only to Division I University of Memphis in the first match of the season and earning an at-large bid to the NCAA regional tournament, which Wash. U. will host in Forest Park this weekend.

The regular season concluded with a 6-3 win last weekend over Emory University, the defending national champions. The team was down 1-2 after the doubles matches, with freshman Gaurav Singh and senior Ethan Hillis defeating Emory’s line three, but the momentum shifted dramatically in the singles matches. Every Wash. U. player won their first singles set, and the Bears won five out of six singles matches, with line six ending in retirement. Wash. U. hadn’t beaten Emory since the NCAA quarterfinals match in 2015, so the victory was especially satisfying for head coach Roger Follmer. “It’s always good to beat them,” he said. “It doesn’t happen very often.” Over Follmer’s 20-season career, Emory has taken the victory in 22 out of 29 matchups.

Part of the team’s success this season has come from the addition of new transfers coupled with strong seniors. There are four transfer students on the team in total, with the two new additions of graduate student Scott Altmeyer and Abhi Ramireddy having an immediate impact on the starting lineup. Altmeyer plays the number two singles and has partnered up with Ramireddy to play the first line for doubles. The transfer duo has won eight of their nine doubles matches, and Altmeyer has only lost one set out of 12 singles matches to stay undefeated.

The team knew early on in the season that comparatively, this year’s team was strong. But this season, it’s been particularly hard for them to assess their depth because of the geographic limitations of traveling. The match against Emory was their first against another University Athletic Association school, and every individual school in the nation has been trying to balance their individual restrictions. Historically strong tennis teams like Claremont-Mudd-Scrips have not been able to play at all, and others like Case Western have been forced to compete within their state. For teams in the UAA, the NCAA qualification process was particularly challenging because without a UAA conference tournament, they could not qualify through Pool A. In Pool A, teams who have won their conference tournament are granted a spot; instead, Wash. U. had to qualify through Pool C and be granted one of three at-large bids. If that sounds confusing, it was also baffling for the players themselves, Singh said: “I don’t even know how [qualifications] work. I just go out there and play tennis.”

The change in qualification status put stress on Follmer to find teams to play that would add to their competitive resume. “On the UAA side, all of us are playing, but we’re all trying to figure out how to get competitive matches,” Follmer said, adding that he was grateful that the Wash. U. administration was patient and allowed them to play at all.

Going into the postseason, the players are more than cautiously optimistic: they’re hungry for success. They’ve navigated five hour-long bus rides to play tennis for a few hours and then go back home. And they’ve seen the results of their work in the day-to-day improvement on the court, both at practice and in matches. “Honestly, it’s just the way our season’s been,” said Singh, one of two underclassmen in the starting lineup. “There’s just an unspoken vibe, something in the air, like all of us kind of have a feeling [about the national championship title].”

That confidence is the result of a strong season behind them—the Bears have won 92 out of 102 total singles matches this season—but there are still a lot of unknown variables for the postseason matchups. After sweeping most of their competition during the regular season, the team isn’t used to playing three sets or many competitive matches in a row. Hillis, who plays in the number one singles spot for the Bears, said that the matches in the regional tournament are likely to be “a lot more intense, with a lot more riding on it, where every point across the line matters. So I guess in that way, it’s anyone’s game. It’s just whoever has somehow been able to be more prepared.”

Follmer is concentrating on the immediate task at hand: the regional competition, which Wash. U. hosts starting Saturday at the Dwight Davis Memorial Tennis Center in Forest Park. He says the team is hungry, driven and carrying the momentum from an 11-game win streak. Simultaneously though, if he’s learned anything this season, it’s not to take their playing opportunities for granted. “We’re just trying to run with [the momentum], but at the same time, knowing that at any time something could happen,” he said. “The championship could get canceled—you’d hope not, but you just never know.”

The team will compete in two matches in the regional tournament after being granted a bye in the first round. Their first match, which will allow spectators, is on Saturday at 1 p.m. against the winner of the Augustana and Grinell matchup. They will have to win both the second and third rounds to advance to the elite eight, held in Chattanooga, Tennessee, on May 24.

Recent athlete profiles as the Bears head into the playoffs:

Emma Walter, a cross country walk-on, is unbeaten so far this track season