"If I had to put money on it, I would say he will be in a farm system by the end of the year," former WU pitcher John Howard said.

If you saw senior pitcher Ryan Loutos headed to baseball practice his sophomore year, you’d think he was headed to the airport.

Every day, the right-handed pitcher made the trek from the Athletic Complex to the baseball field lugging a 60 pound suitcase behind him, the wheels announcing his arrival as they clicked over the pavement. Inside the silver case was everything he needed to warm up for practice, including a trampoline, medicine ball and a 15 pound weight. On its surface, pitching seems relatively straightforward—throw the ball, and the batter hits it or he doesn’t. But that year, Loutos had so many training tools to help him warm up that the only way that he could carry them was in a suitcase. “It was like a small child that he would not get rid of,” former Division III pitcher of the year and 2019 baseball graduate John Howard laughed. “My first thought was that this is a little excessive. But also, I should probably be doing something like this for my arm, too.”

Since then, Loutos has partially backed off his warmup routine, at least enough so that he doesn’t take a suitcase with him to practice anymore. But the guy who carried around a trampoline, medicine balls and a 15-pound weight is still working on his game. Now, he’s got his sights set on professional baseball.

This spring, Loutos has helped the Bears to a 24-3 overall record, pitching to an astounding 1.14 ERA through 63 innings. While reporting on the team’s success throughout the regular season, I got small glimpses of Washington University’s ace through interviews with his teammates. Talking after a rare, disappointing loss, junior catcher Zac Styka brushed off a question about Loutos’s pitching. “It’s tough to critique Ryan. He’s one of our team captains, and he’s an awesome dude. You can only ask so much of one guy, you know?” This “awesome dude,” I learned, had major league baseball scouts journeying to a Division III school to sit on metal bleachers in the hot St. Louis sun to watch him pitch. He came to Washington University with a powerful arm in 2017, and he has since become one of the best pitchers in Division III.

Loutos looks intimidating on the mound. He twirls the ball in his hand, scuffing the dirt below his cleats before his windup. He’s completely focused, and even when his pitch almost always finds its spot in the catcher’s glove, he frowns a little as he returns to the mound. Nothing seems to satisfy him when he steps onto the rubber. When he records strikeout after strikeout—he’s racked up 84 in nine games this season—he doesn’t celebrate with the rest of his teammates. At most, he’ll give a fist bump as he strides back to the dugout.

Yet his measured demeanor isn’t anything new. He’s been like that ever since he started to pitch at eight years old. “He’s been a good pitcher since he was that young—just calm, cool, and collected… he didn’t all of a sudden turn on a switch in high school,” said John Loutos, Ryan’s father. “At 10 years old he was unflappable.”

In pitching, Ryan Loutos told me, more emotion is a good thing. “That toughness and that mentality and that fire—that doesn’t come naturally to me,” he said. But as Loutos has gained confidence on the mound, he’s learned how to pitch with emotion, even in games that are relatively low-stakes.

“He’s moving differently,” Howard said, reflecting on how Loutos’ pitching has changed since his first year with the Bears. “He’s got this sense of competitive fire every time he goes out there… Seeing that from afar is a really fun thing, and I think it’s reflected in how damn well he’s done this year.”

Loutos throws a warmup pitch during a game against Spalding University in April. “He’s like this, big teddy bear kind of guy,” former Wash. U. pitcher John Howard said. “And then he gets in between the white lines, and he’s clicked into another person.” (Photo by Clara Richards | Student Life)

Another difference between the Loutos of freshman year and the current Loutos is that, quite simply, he’s throwing a lot harder. His arsenal of strong pitches, including a sharp curveball and a late-action cutter, have become even nastier due to his increased velocity and spin rate, he said. “You’ve got this guy that’s got lights-out stuff, and a hugely projectable frame and… he’s got the intangibles to do it,” Howard said.

Yet putting the intangibles together with on-field performance to land a professional contract is a tall order, especially changes to the MLB draft process. In an effort to cut costs during COVID, MLB cut its 40-round draft down to five for the 2020 season, and the 2021 draft will only have 20 rounds. These changes mean that for the draft held this July, Loutos has just half the normal opportunities to find a team, and he faces a backlog of draft-ready players from the 2020 season. “I could be disappointed or sad about that, but I can’t really change it,” Loutos said. “There’s nothing really I can do about it. It definitely hurts me, but I think if a team likes me enough, they’ll find a way.”

Only one player was signed from Division III in the 2020 MLB draft, showing that while not impossible, it is a hard feat. But Tyler Hadzinsky, an assistant director of scouting for the St. Louis Cardinals who came to last Saturday’s games against Wabash College, doesn’t think it is too out of the ordinary for players to get recruited out of Division III schools like Wash. U. “We have DIII players in our office, so we always kind of root for them, but I think it’s good to have success at that level,” Hadzinsky said. Still, Washington University hasn’t had a player receive a professional baseball contract since 1997, when outfielder Russ Chambliss signed with the New York Yankees in the 54th round of the MLB draft.

Granted, there are other paths to professional baseball, including becoming an undrafted free agent and signing with a team outside of the draft. Loutos doesn’t seem too stressed about it though. “In my mind, I’m playing with house money. I got a great education at Wash. U. and I have opportunities set up outside of baseball,” he said. “I don’t have anything to lose.” He will play in the Northwoods League this summer with other Division I, II and III players in hopes that he will catch the eye of professional teams before the draft.

Loutos himself may have been nonchalant about his chances, but Howard was much more confident. “If I had to put money on it, I would say he will be in a farm system by the end of the year,” he said.

Yet even between morning lifts, afternoon practices and weekends spent on the field, Loutos has found the time to create a pitching analytics website for the team together with fellow pitcher Mitchell Black. His passion for computer science intersected with baseball, fixating on the intricacies of pitches and the patterns that emerge from the data. The result is a website that tracks every pitch thrown by a Wash. U. pitcher, logging metrics that can show both strengths and weaknesses. After pouring over a thousand hours into the design, he estimates that they have recorded over 25,000 pitches with it. “All those little things and all that data is now accessible—that just makes a big difference. I think it gives you a new insight into what you’re doing as a pitcher,” he said. 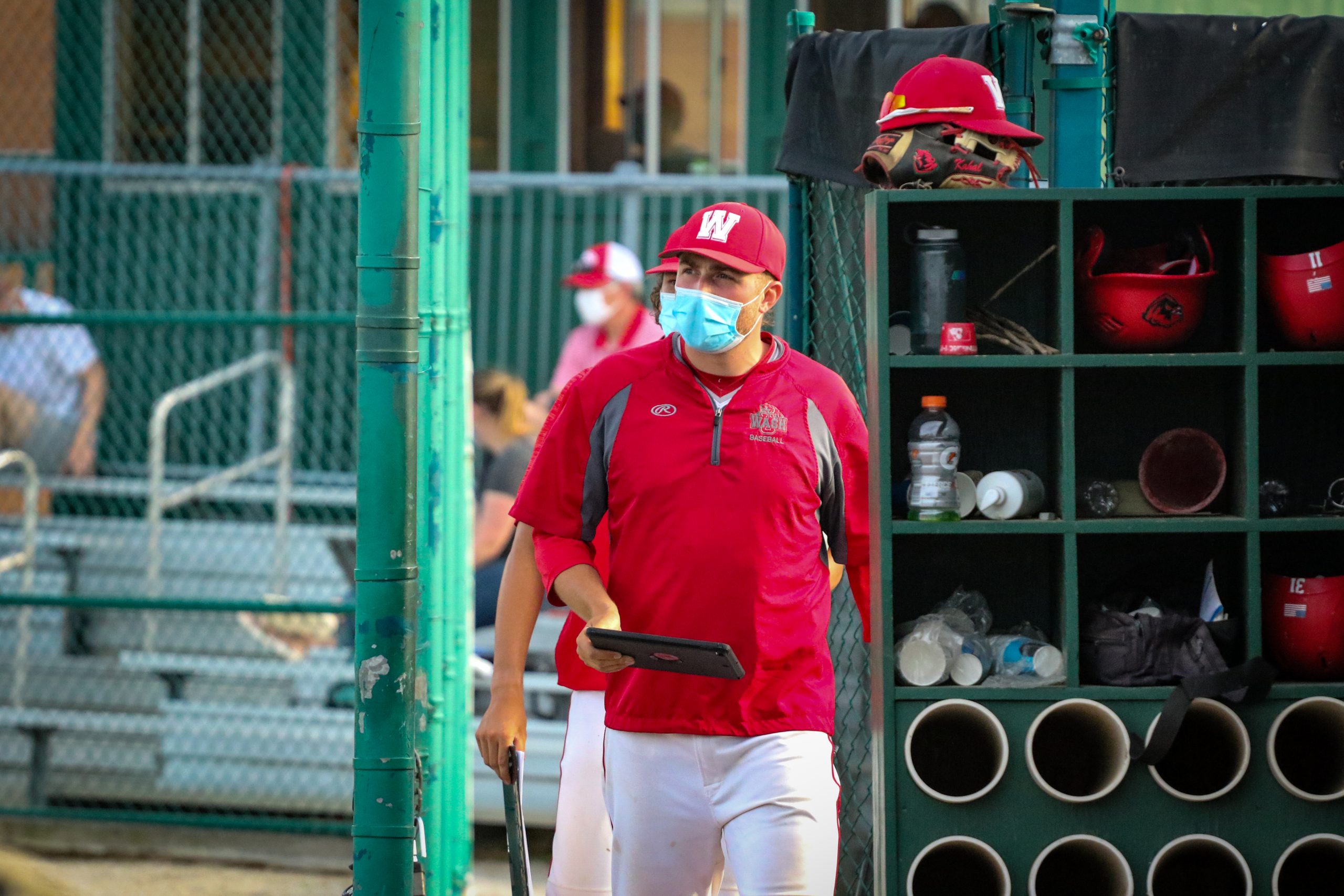 Loutos heads back into the dugout after recording pitch statistics for the website that he has created alongside fellow pitcher Mitchell Black. (Photo by Clara Richards | Student Life)

For most of the players on the team, though, Loutos is not just the ace pitcher or the computer science guy. He’s the dad of the group—the one the team gathers around as the sun sets on the field right before they go home. He is the guy roommate senior Henry Singer will ask to watch his dog, the one his dad will call to figure out how to type up a Word document and the person his brother will turn to for help with homework. “Ryan is the best person I know,” Singer said. “If you ask him to do a favor or anything, sight unseen, no questions asked, he’ll do it.”

In their house, where Loutos and Singer live with two other teammates, Loutos is the one who turns on the sprinklers and takes out the recycling every week. “We call him our dad—if he wasn’t a part of our lives, we would just struggle to survive on a day-to-day basis,” Singer said.

Even with those who have known him the longest, he’s always been measured and rational.  Singer and Loutos moved in together freshman year, and Singer recalls only one memory of Loutos at his angriest. It was 3 a.m. on a school night; Singer woke up, glanced at his phone, and mistakenly thought that they were late for 2 p.m. practice. He launched himself out of bed and shook Loutos awake. “Ryan, we’re late for practice. It’s three, and we’re late for practice.” Loutos opened his eyes and yelled, “Dude, you f–king kidding me? It’s three in the morning—what’s wrong with you?” Singer said after four years of living together, the angriest Loutos has gotten was a late-night expletive before falling back asleep.

“It’s funny, because his level of anger is so jarring because it never gets above zero. But even if it’s at one it’s so jarring, because it’s like, oh my god, who is this person?” Singer said. The two lived three feet away from each other for two years, and Loutos was the ultimate low-maintenance roommate, he said. “We’re not still living in the same room, which I kind of miss a little.”

In his last semester, Loutos is only taking six credits, focusing on baseball, computer science, and rewatching the television show “The Wire.” His hobby this semester has been strolling around their house in a grey robe and slippers, a “pretty enviable outfit,” Singer said. Three weeks away from graduation, Loutos is ready for what’s next. Singer, for one, is excited to witness it. “Never bet against him,” he said. “That’s rule one.”

Our history of Wash. U.’s head coaches of color