Junior shortstop Caleb Durbin stomps home plate after hitting a home run in the first 10 minutes of the bottom of the first inning against Wabash. (Photo by Clara Richards | Student Life)

After going 3-12 from the plate in last weekend’s series against Buena Vista University, Durbin watched five fastballs zoom by, waiting for the right pitch. But in doing so, he worked his way to a 3-2 count –– his strikeout streak on the line.

That’s when Wabash College starting pitcher Dylan Scheid threw a fastball up and in.

Durbin sent it flying over the left field fence and bouncing on to Forsyth Avenue.

The Wash. U. bench jumped up in unison. They hooted and hollered for their shortstop.

The home run put the Bears up 2-0 in the bottom of the first inning, calming the team’s nerves. The weekend before, the then-No. 1 Bears had traveled eight hours to take on 9-16 Buena Vista. What looked like an easy three wins ended in two losses for the Bears, as Wash. U. led only twice during the entire three-game weekend.

“We sort of see Buena Vista as kind of a blunder,” Durbin said. “Just an off day for us.”

Against the 18-13 Wabash Little Giants, though, Durbin’s home run gave them the spark and cushion they needed. On senior day, the Bears cruised to a doubleheader sweep, beating Wabash 5-0 and 15-9 to improve to 24-3 on the year with four regular season games to go. The wins brought the Bears back to the No. 1 ranking in Division III. 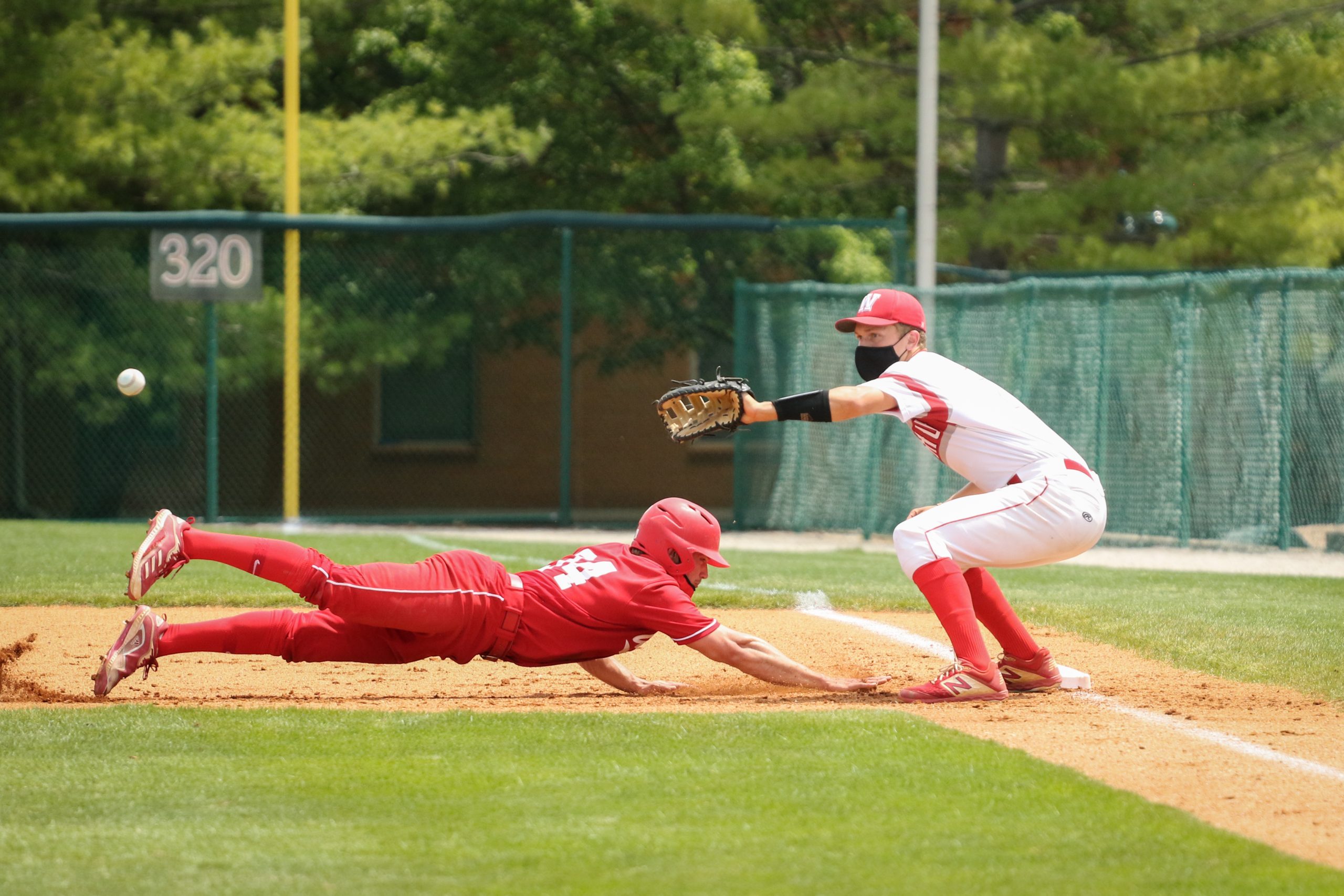 First baseman Bo Anderson extends his glove to make a catch at first as a Wabash runner dives for the base. (Photo by Clara Richards | Student Life)

“I think we’ve kind of fallen into a trap where we just over-relied on our pitching because like it had essentially become automatic,” senior outfielder Henry Singer said. “I think it was just a big focus on the offense to let the offense lead the way so we take pressure off of the pitching.”

Following Durbin’s fourth home run of the season, the Bears regained crucial momentum that they lost last weekend—thanks, in large part, to starting pitcher senior Ryan Loutos. After giving up five runs in his start against Buena Vista, Loutos returned to form. For the first four innings, he dominated the game, holding the Little Giants hitless. Loutos, said head coach Pat Bloom, was “in attack mode mode from pitch one.”

Then he ran into trouble, allowing runners to reach second and third with no outs in the fifth inning. But he buckled down, forcing the first two Wabash hitters to foul out to first and ground out to the pitcher. He topped it off by striking out Wabash’s Austin Simmers, who was hitting .415, with a blazing 90 mile per hour fastball. The bench erupted, but Loutus didn’t react. He just put on his blue surgical mask as he walked towards the dugout through a tunnel of high-fives.

“If you let Ryan get comfortable in a game, which is what’s going to happen if you get an early lead, it’s going to be all that much harder for the other team to beat him,” Singer said. “And I think that’s what you saw this weekend. Just the difference between pitching with the lead versus pitching from behind.”

The first game was never close. By the time Loutos left the mound in the seventh inning, he had allowed no runs on six hits while striking out nine batters. Senior Jared Fong closed out the final 2.2 innings by not giving up a hit or walk, capping off a dominant victory for the Bears in their fourth shutout of the season. 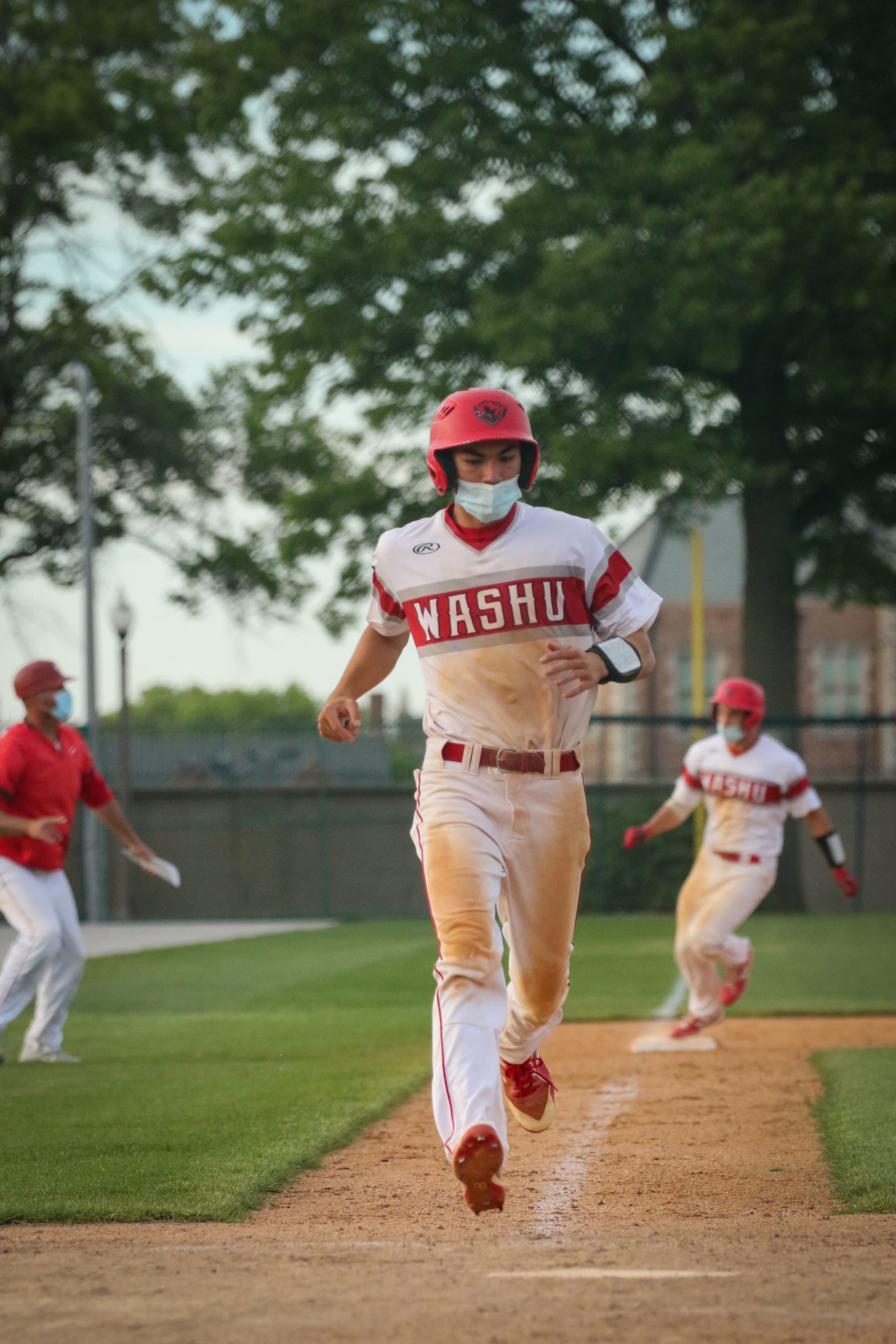 Wash. U. carried that success into the second game of the doubleheader. Another first inning home run—this one a left field moonshot by junior infielder Andrew Huang—gave the Bears a three-run cushion. Behind the early lead, senior Troy Bauer pitched five innings, giving up one run and striking out 11 batters.

“It was as good as I’ve seen him look all season,” Bloom said of Bauer’s performance.

The Bears scored in each of the first five innings, leading 13-1 and allowing just three hits. With a possible mercy rule in play, Bloom made mass substitutions, giving a few seniors a chance to get some game action on Senior Day. Wabash responded with a three-run home run in the sixth, followed by a four-run, six-hit inning in the eighth. Although Wash. U. would walk away with a comfortable 15-9 victory, it marked the most runs they have allowed all season.

The priority now is rest, said Bloom. That means less baserunning, shorter practices and fewer batting practice swings. Next weekend, they will travel to Greencastle, Indiana to face off with a 15-19 DePauw team. Without an automatic bid due to a shortened playoff schedule, Bloom said, every game is “a playoff game.”

This next week will be a juggling act as players finish up their academic semesters and prepare for the final four games of the regular season.

“The biggest focus is making sure that we can keep our bodies fresh and our minds sharp and that we can get through this tough week of final class days as well as start final exams and be in a good position to travel to DePauw and play well,” Bloom said.