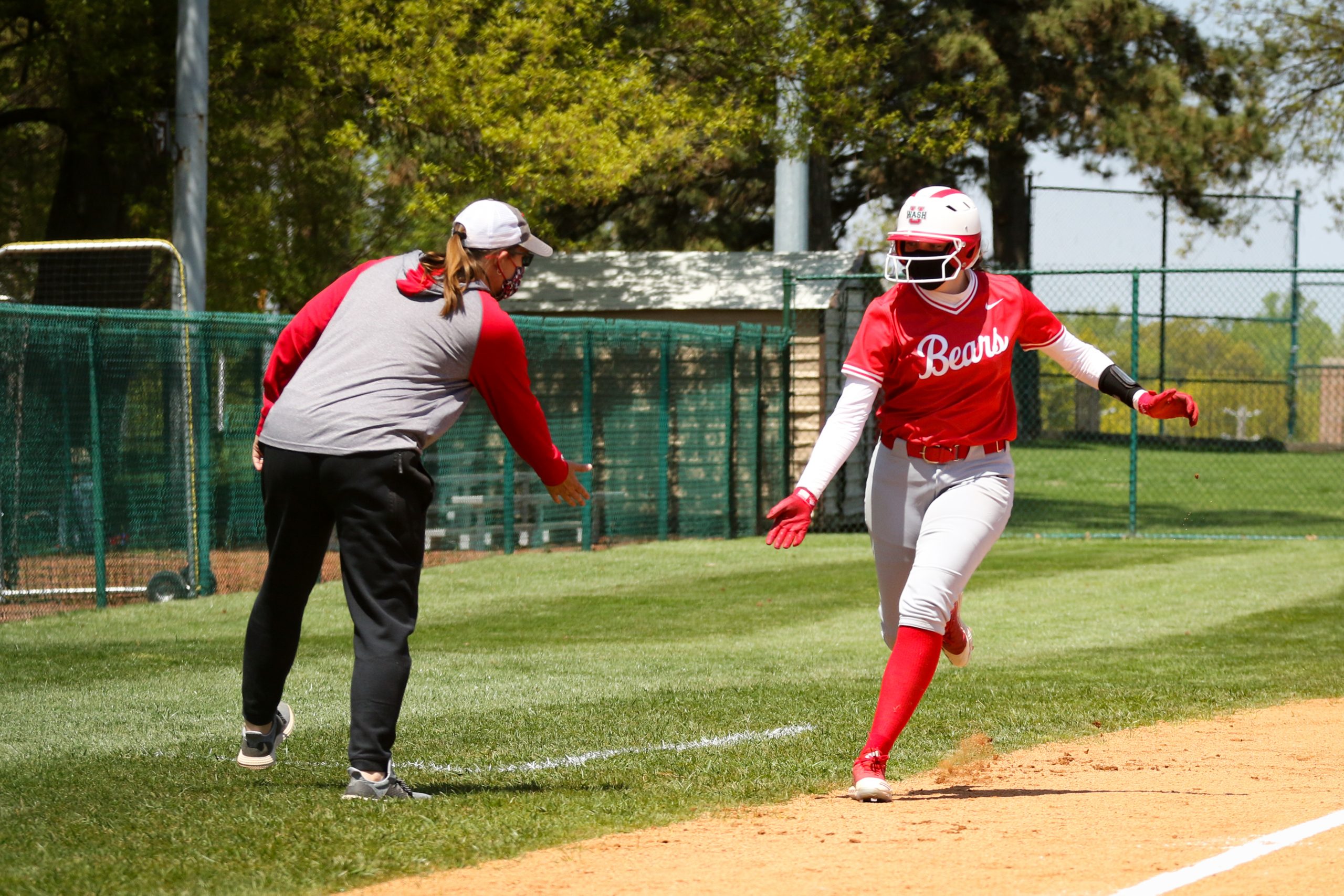 Sophomore Eimear Cunningham celebrates with her coach after hitting a home run in the second inning of the Bears’ first game against Franklin College. (Photo by Clara Richards | Student Life)

The Washington University softball team demonstrated both the best and the worst of its offense this weekend as the team won two and dropped two to remain even at 9-9 on the year. When the offense shows up, as it did during their two-game sweep over the University of Chicago on Friday, the team is hard to beat. But when the Bears struggle to string hits together or attack the other team’s starter, things become tougher, as evidenced by the doubleheader losses to Franklin College on Sunday.

The games were the first competition the team had seen in two weeks due to a seemingly-endless string of rainouts, delays and cancellations. Head coach Michelle Venturella said that the team kept sharp during the break, but finally getting back on the field was exactly what the team needed. “During those [breaks], it’s honestly the emotional part,” she said. “I give our team a lot of credit for being extremely positive during difficult times.”

The Bears returned to the field with a bang, showing no signs of rust as they scored four runs in the first inning of game one against Chicago on their way to a five-inning, mercy-rule win by a score of 11-1. Home runs from junior Kirsten Drabek and sophomore Kayla Nommensen in the third and fourth innings, respectively, capped off an offensive display by the Bears, who tied their highest run total on the season in just four innings of work. Junior pitcher Madison Denton complemented the offense as she shut down the Maroons’ bats, allowing only two hits in her best performance of the season.

Game two against the Maroons featured another strong outing from junior Holly Stoner, whose team-best earned run average dropped to 3.60 after she tossed complete games on both Friday and Sunday. A timely three-run seventh inning, including a go-ahead home run from sophomore Tami Wong, gave the Bears the late lead en route to a 5-3 win.

“I would trust any of my teammates to be in that position and come through for the team, but I was glad it was me and I was able to produce for the team,” Wong said.

Venturella said the come-from-behind victory felt particularly gratifying. “It took us a little longer, but it was sure nice to be able to come back and get that win,” she said. “It’s always a great feeling.”

Junior Katie Gould finished 3-3 on the day and swiped four bases, tying the school record for the most stolen bases in a single game.

Sunday’s doubleheader against Franklin College, however, exposed the flipside of this Bears team, as the same offense that powered Friday’s wins produced quite different results. In game one, Wash. U. managed only four hits and a single run, a solo blast by sophomore Eimear Cunningham, in a quiet day at the plate against Franklin’s talented arms.

“We really just didn’t do our part, we didn’t string hits together and get timely hits,” Venturella said. But it was not just the offense. “Part of that honestly is just on the flip side, defensively, we didn’t make a couple plays that we needed and sometimes that can affect what’s going on on the other side,” she said.

Denton again started and threw all seven innings, but she lacked the same dominance showcased in her last outing. Game two saw the Bears offense produce hits, but they failed to string them together in critical moments, and only managed three runs on their eight hits. Stoner took the mound once more and threw seven innings, but as with Denton, the lack of offense and arms behind her induced a shakier performance than Friday. “If you’re not putting runs on the board,” Venturella said, “then a lot of times your pitchers know they have to make sure they’re doing their job and there’s a little less flexibility for them.”

This theme has been consistent throughout the season, with a high-energy offense often propelling the team forward, while slow days at the plate seem to affect all aspects of the Bears’ game. “It’s definitely a two-way street; if we have high energy, it definitely increases our performance,” Wong said. “If our energy is up and we’re hyped in the dugout, we just end up naturally hitting better too.”

The Bears hope to at least maintain their .500 record as they close out their season with doubleheaders against Coe College and Fontbonne University this weekend.

Stories of the Bears’ return to sports during the pandemic: