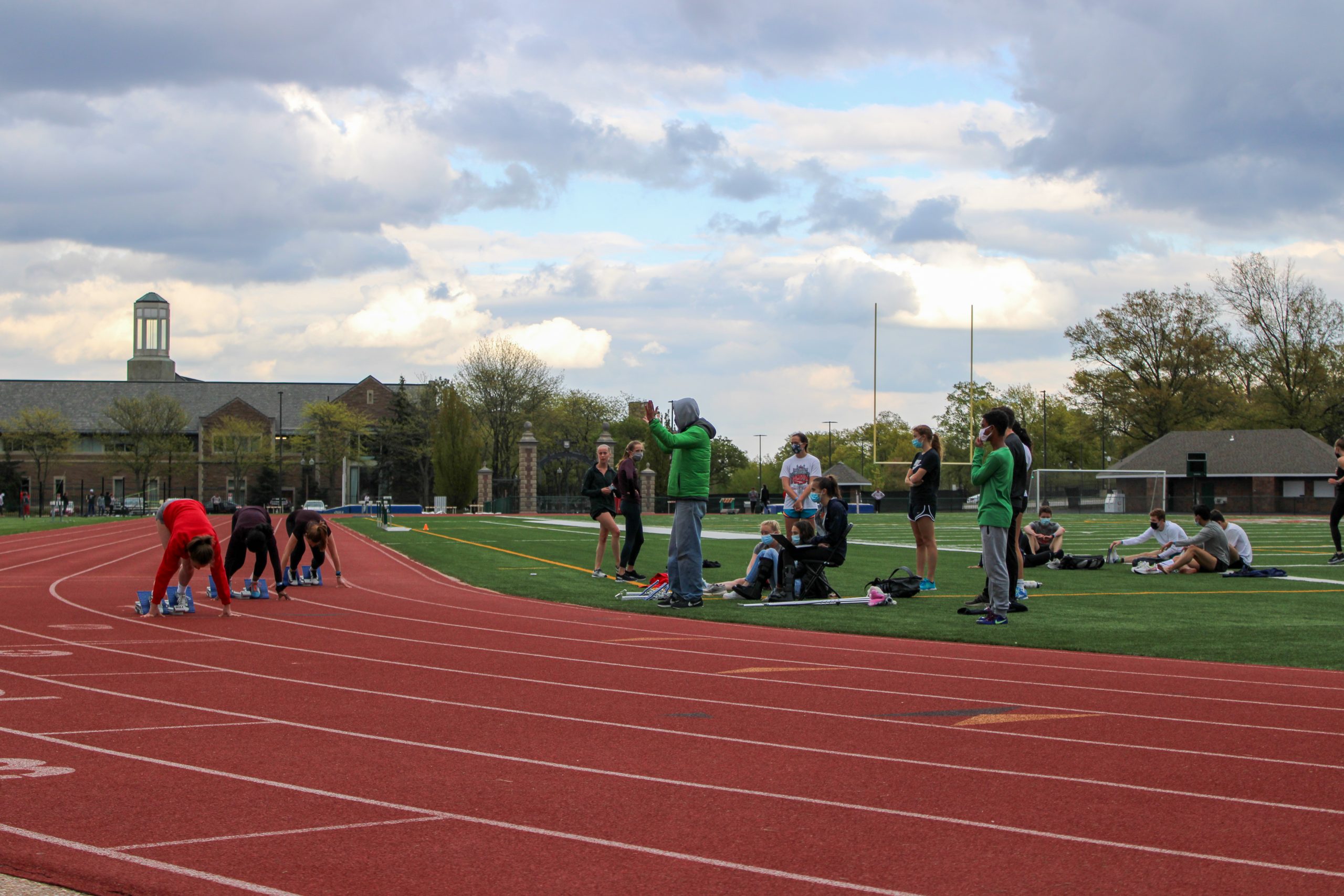 In a normal middle of May, senior Julia Dannenbaum, a pole vaulter on the Washington University track and field team, would be practicing her vault at the pit on Francis Field. The last few weeks before NCAA championships would provide crucial time to get into a rhythm and bolster confidence before the team headed out to take on the country.

This May, that will not be the case. Commencement, which is typically at Brookings Quadrangle, will be held for the class of 2021 across two days on Francis Field. Student-athletes will not have access to the field or the track for nearly a week before the ceremony. That displacement has caused frustrations, particularly among field student-athletes who rely on specific facilities at Francis Field for their training ahead of May 27 national championships.

“I don’t think any athletes are being asked about what makes sense for us,” Dannenbaum said. “It’s definitely disappointing.”

Senior mid-distance runner John Harry Wagner shared a similar sentiment. “Those are weeks where, if you’re on the team, you’re getting your last practices in,” he said. “You’re getting ready for the biggest competition of the year, it’d be nice if we could be on our home track.”

While the actual commencement ceremony will happen on May 20 and 21—more than two weeks after the end of classes—the University plans to begin commencement preparations on May 15. During that time, the track will be unusable, as protective covers, cables, wires and chairs will line all of the football field and surrounding track area, Associate Director of Athletics for External Operations Chelsea Petersen said in an email to Student Life.

When asked about the student-athletes’ lack of access to the field, Director of Athletics Anthony Azama focused on the importance of having an in-person commencement. “When we were approached about utilizing Francis Olympic Field for Commencement, we operationalized our Facilities Team to collaborate and figure out the best path forward,” he wrote in a statement to Student Life. “One of the greatest aspects of sports and fitness is bringing people together, and we are excited that our facility can serve as a point of celebration this May.” Azama’s statement did not mention the lack of access to the field.

In her email to Student Life, Petersen said the athletic department had worked with the commencement production company to lower the number of impacted training days from what had initially been expected, and that the department was looking for alternative training locations. “Regardless of where we find the best option for us to continue to train, our focus is on competing for championships,” Petersen wrote.

Senior sprinter and hurdler Caira Watson-Haynes said that the closure will be especially taxing because the already-uncommon season has given them little time to establish a rhythm. “We don’t really have a smaller competition between meets [and NCAAs], so it’s even more important that we have high level practices,” she said. Watson-Haynes said that without a winter track season to get the team fresh coming into spring, it has been difficult for athletes to build up to peak performance, so losing Francis Field would exacerbate that hardship and pressure them from yet another angle.

Head coach Jeff Stiles said that the closure will be coming at an inopportune time for the team. “It’s kind of an important time to stay sharp,” he said. Both the men’s and women’s teams are currently top 25 in the nation and have improved with every competition, but the prospect of losing a familiar practice spot, especially for a sport that depends so heavily on a consistent training schedule, will pose a late-season obstacle. “We’re trying to not focus too much [on the lack of access], but it’s definitely a challenge,” Stiles said

Field athletes in particular will feel the impact of this closure, as their performance heavily relies on access to specialized equipment and facilities such as vaulting poles or long jump pits. Dannenbaum said that losing those critical parts of her training, as well as her consistent regimen, presents a challenge she has never encountered before. “My vault is very dependent on my rhythm, and I still haven’t found my rhythm yet, so it’s even more important for me right now to be vaulting and getting my confidence back,” she said. “Once we’re competing, we’re vaulting twice a week for practice… so we need poles, we need a pit, we need a box to train effectively, and I don’t know what’s gonna happen.”

The frustrations over limited access to the field build on existing tensions between student-athletes and the department. For much of the year, it had been the University’s policy to institute a pause for an entire team whenever a player tested positive for COVID. Many on the track and field team, which has more than 100 student-athletes, took issue with that policy: it meant that even though student-athletes practiced in pods and rarely interacted with members of the team outside of their specific event, all members would be affected by a single positive test, senior runner Joe Stover said.

Stover worked with other student-athletes to develop a petition in early March that called for changes to the policy, including increased transparency from the University’s Covid Monitoring Team and a contact tracing protocol that matched those of non-student-athletes. Stover said it took a few weeks to get a meeting with the monitoring team, but that administrators were eventually receptive to student-athlete concerns. Now, a single case on the track and field team no longer creates a pause for all team members, and the athletic department has restructured practices to further limit overlap between events.

“We’ve seen some change,” Stover said. “Maybe not to the scope that we wanted to, but they also gave us some direction on things we can do to work with the Covid Monitoring Team and shorten these pauses and get back to more full competition.”

The incorporation of student-athlete feedback does not diminish the challenges along the way. For Wagner, it has felt as if it has been more difficult this year for student-athletes to have their voices heard in the department’s decisions. “We’ve had to work a little harder this year,” he said.

Watson-Haynes agreed, noting that inclusion in the athletic department’s plans has been a problem more than once. “I think we really saw that a lot with COVID, and we’re just seeing it now with graduation,” she said. “I think if anything, it just shows how athletes aren’t as thought about in some of the plans they’ve been making.”

Still, Wagner said he appreciated what efforts administrators had made. “People are doing the best they can and listening when they can,” he said.

Despite the frustrations, Stiles remained optimistic. “Our definition of success is do the best you can with what you have, so that’s what we will do,” he said.

Stiles noted that student-athletes have demonstrated grit since the start of the pandemic that will allow them to flourish. “COVID has produced lots of challenges, and these athletes have shown me that they will not be making excuses,” he said. “I feel confident we will continue to work to find alternative training solutions for our team and cannot emphasize enough how excited I am for the moments of celebration our graduates will now be able to experience in person.“

How WU baseball prepped one Bear to work for Cori Bush

‘I think we have a pretty good shot to win the whole thing’: Men’s tennis wins big against Principia