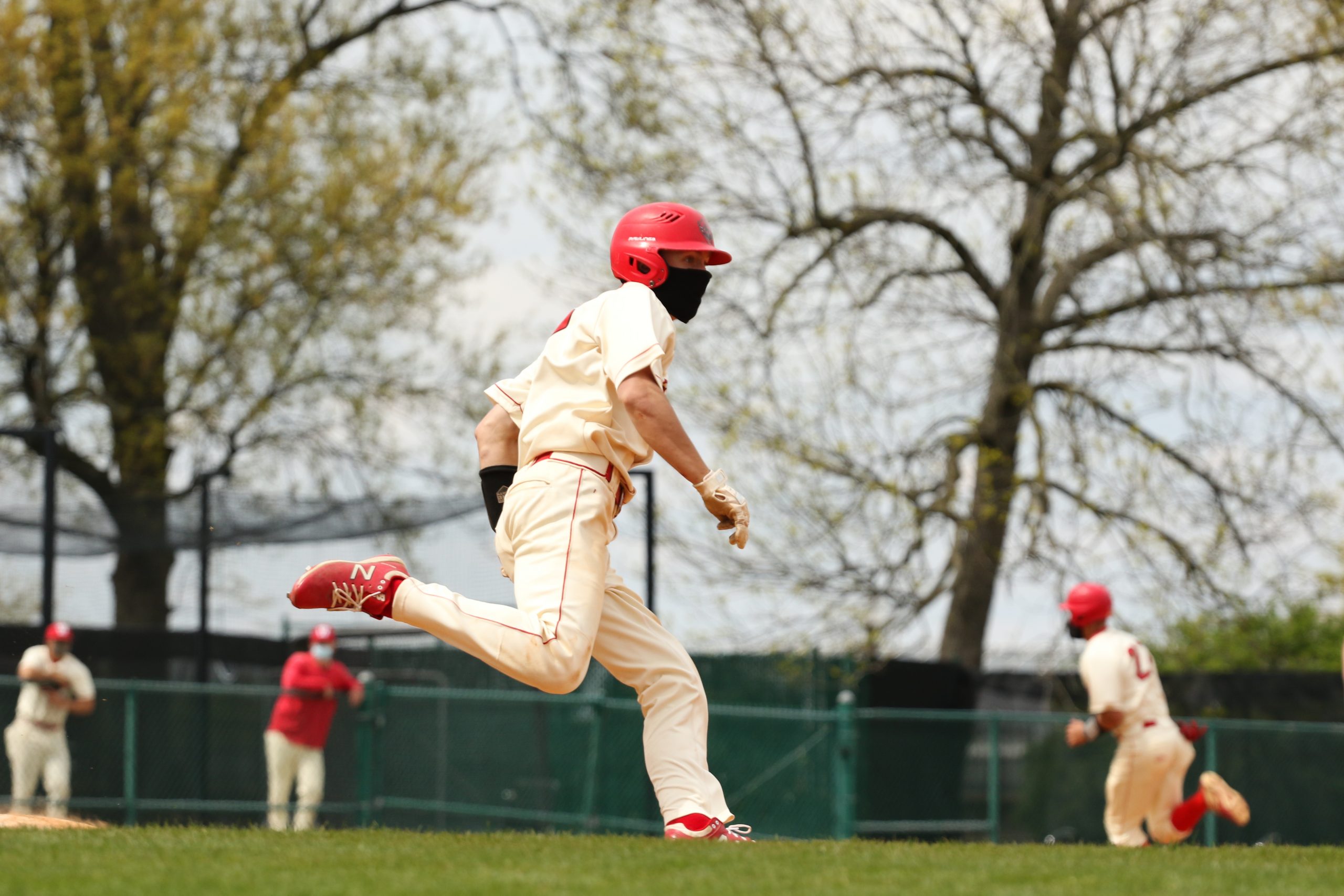 Senior Henry Singer reaches first on a single in the Bears’ first game against Spalding on Saturday. The baseball team is now 21-1 on the season. (Photo by Clara Richards | Student Life)

When he stepped to the plate Saturday evening, junior Andrew Huang had never hit a home run in college. Seconds later, that had changed. Huang sent a ball soaring through the lengthening shadows at Kelly Field to give the Washington University baseball team a walk-off win over Spalding University, 3-2 in 11 innings.

“When you’re a little kid playing wiffle ball in your backyard, you try to simulate that movement—two outs, bottom of the ninth, or something like that,” Huang said. “I don’t even know what happened, it happened so quickly, but I’ll probably remember that for the rest of my life.”

That win was just one of four on the weekend, as the Bears continued their Division III dominance with back-to-back doubleheader sweeps over Spalding University to maintain the No. 1 ranking nationally. The Bears outscored Spalding 18-4 over four games, and the team’s 21-1 start to the year is one of its best ever.

While the Eagles are not a ranked team, Spalding had been able to rack up a few victories against top teams, including a 5-2 win against Webster University earlier in the season, and for much of the weekend they kept things close against the Bears.

In the first of Saturday’s games, the score hovered at one for the Bears from an early run from junior Tim Van Kirk, who scored on a wild pitch after two scoreless games last weekend against Webster. An Eagles error in the fourth allowed senior Caleb Durbin to score, and the Bears had big sixth and eighth innings to push the score to 7-1. Senior pitcher Ryan Loutos gave up an uncharacteristic three walks through six and a third innings—before that, he had walked a total of four players in five games pitched—but his performance still lowered his earned run average to just 0.89 on the year. When senior Jared Fong tossed a scoreless two and two thirds innings in relief of Loutos, the Bears showcased a key strength this spring: Even with key players having (by their own, high standards) an off day, the team’s depth has prevented shows of weakness this year. They won the game, 7-1.

The Bears struck first in the second game Saturday as they strung together a collection of hits early, but after the fourth inning, the game stagnated. For six successive innings, the Bears failed to cross home plate, a rarity this season. “Their pitcher was dealing. He wasn’t a top velocity guy, and he didn’t have any crazy off speed,” said junior Bo Anderson, who went 0-3 with a walk in Saturday’s second game. “He was throwing a changeup a lot—he was mixing that in and I think that was throwing us off a little bit. We just weren’t able to string hits together.”

The game stretched out to the bottom of the 11th inning as the teams battled for the sixth hour. But all that changed when Huang stepped up with two outs to hit the walk-off home run.

Huang said despite the extra innings matchup, the mood in the dugout was just as confident as it has been the rest of the season. “There were no doubts,” he said. “We had the feeling that if we just kept playing our style of baseball then there was no way we could lose.”

In Sunday’s games, the Bears kept the Eagles’ offense at bay through strong pitching and fielding efforts. In the first game, senior Mitchell Black pitched six innings, with seniors Tim Tague and Fong finishing out the game. While the teams had an equal amount of hits, at six each, the Bears’ pulled away late to secure a 4-1 victory.

In the second game, junior Austin Sachen, freshman Clayton Miller and sophomore Dominick Dicosimo took the mound. And while the relief pitchers in both of Sunday’s games may have been relatively new faces for the Bears, they were essential to the team’s success. “It was great to see them all come into those spots and do what they had to do,” Anderson said. “Even if it was only Tim Tague throwing 20 or 30 pitches, that’s what we needed out of him. I mean, he did a hell of a job with that.” The Bears won the last game of the weekend, 4-0, and sent the Eagles back to Kentucky empty-handed.

Head coach Pat Bloom said there was room for improvement for the Bears’ hitting lineup. “Sometimes hitting is about making adjustments; beyond making physical adjustments to your swing, you have to make the necessary mental and approach adjustments within a game,” he said. “Our hitters know that we can be better and we’re looking to be consistently better in that area as the season moves forward.”

The Bears had not played back-to-back doubleheaders since 2019, so it was an adjustment. Bloom said playing four games in two days was helpful preparation for a potential busy postseason. “Playing a four game series against the same opponent is an absolute grind,” he said. “It’s physically and mentally exhausting for the players, and you don’t quite know how it’s going to affect your team until you go through it.”

The Bears are scheduled to play three away games against Buena Vista University this Saturday and Sunday, as they set their eyes upon a final stretch of 10 regular season games.

How the Bears got here: Baseball’s spring journey to No. 1

Baseball, on 14-game win streak to open season, remains second in the nation after sweep of No. 5 Aurora