The Washington University baseball team trailed, 2-1, as they entered the ninth inning in the first game of a doubleheader Sunday against Webster University. It had been a hard-fought game, with seven hits total for the Bears, and tumultuous, too: a brutal full-speed collision between Wash. U. outfielders Troy Bauer and Henry Singer in the fifth inning allowed Webster to score their two runs on an inside-the-park homerun that could have been a simple flyout. With only a run to show after eight innings, the Bears had three outs to reverse fate and keep their undefeated season alive.

Short minutes later, two swings of the bat had changed it all. Freshman Clayton Miller doubled to lead off the inning, bringing junior shortstop Caleb Durbin to the plate. Webster ace Matt Mulhearn, who had quieted the Wash. U. bats all day, delivered his first pitch to Durbin, a hanging off-speed pitch. Durbin smoked it. The ball flew over the stadium’s back wall for an emphatic home run, and while Miller hurried around to home, Durbin took his time, high-fiving head coach Pat Bloom at third base before stomping on home plate to officially give the Bears the lead.

With one swing, Durbin had redeemed everything that had gone wrong for the Bears in the game—a triumphant moment, and a testament to baseball’s stunning, and oftentimes fickle, beauty. The Bears finished the game 3-2, those two runs sealing the deal. “As an upperclassman, you want to be in those moments,” said Durbin. “You never try to hit a home run, but going into the box, I felt like I was gonna get the job done.” 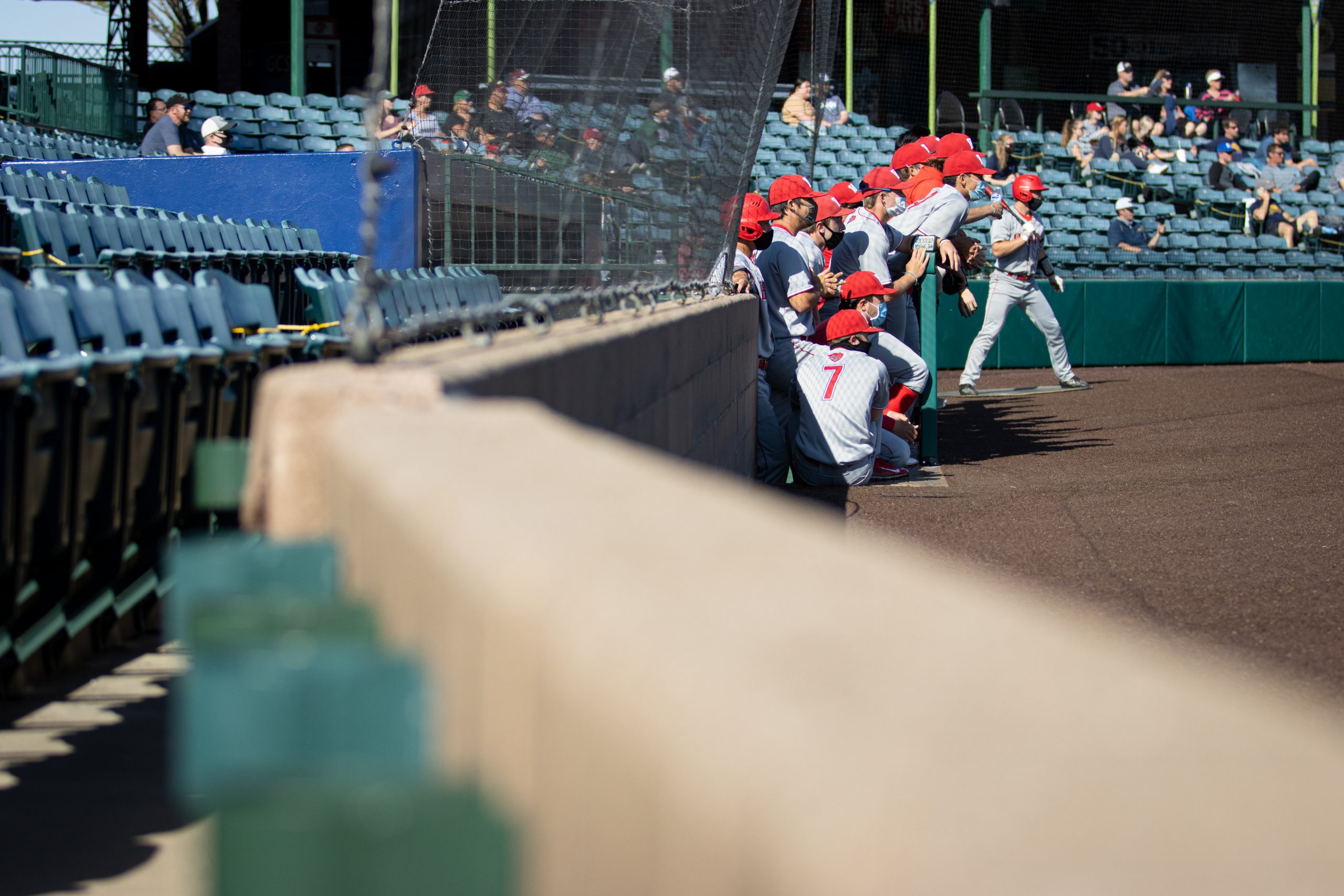 The Wash. U. dugout looks on during the first of the Bears’ two Sunday games against Webster University. (Photo by Curran Neenan | Student Life)

The weekend was one of education for the Bears, as they first swept Westminster College in a Friday doubleheader before Durbin’s late home run saved them in the first game against Webster Sunday. They lost the undefeated season with a 7-1 loss in the late game Sunday, but attained the top spot in the national rankings Tuesday morning, as voters rewarded their incredibly consistent play throughout the entire season. The Bears, who are now 17-1, had been ranked second for the previous three weeks, but the previously No. 1 team, Trinity University, lost to 9-20 Schreiner University. This is the first time the Bears have held the national lead since the abbreviated 2020 season.

With six games initially scheduled for the weekend, Friday’s doubleheader against Westminster was a chance to see some unfamiliar faces on the mound—the more experienced pitchers were saving their arms for Webster. Junior pitcher Matt Bauer, for example, came into game two on Friday and gave the Bears five strong innings of work in his first outing of the season. Bloom said that he was glad that he was able to give players more experience on the mound. “We were able to test some different options, positionally, because you’re going to need to have that versatility and depth on both sides, offensively and defensively as you get into the postseason,” he said.

A Wash. U. batter avoids an inside pitch during Friday’s games against Westminster College. (Photo by Curran Neenan | Student Life)

The Bears won the first game 10-4 and the second game 11-3, with Singer and junior Tim Van Kirk scoring four runs apiece. With strong pitching, fielding and hitting, the team justified their then-No. 2 seed by flawlessly executing plays and not leaving many opportunities open for the Blue Jays.

Saturday dawned, and with high winds and rain blowing through St. Louis, the scheduled Saturday doubleheader against Webster had already been canceled late on Friday night. Bloom said the initial plan of six games in one weekend was just an unlucky scheduling conundrum. Given pandemic travel restrictions and other scheduling restrictions, the Bears were “just trying to take whatever teams were willing to play on whatever days they were willing to play,” Bloom said.

Before this year, Bloom had never coached a team to a victory against Webster, so entering Sunday, the players knew that it would be a hard-fought battle to maximize every opportunity to score. The pitching alone pitted ace against ace, with Webster’s Mulhearn ranking second in the Division III for strikeouts and Wash. U.’s Ryan Loutos fifth. “It was a dogfight,” said Durbin. “They had their number one guy versus our number one guy—I just had a feeling it was gonna be a pitching battle all day.”

From Bloom’s perspective, one of the goals offensively was to force their pitcher into making tough pitches, sacrificing an early-inning out for contact at the end of the game. “You just have to make sacrifices with what you’re trying to do at the plate in order to hopefully benefit the team in later innings,” Bloom said.

Ultimately, Bloom’s strategy paid off in the first game, with Durbin’s home run bringing in the game-winning two runs.  But after that first win, the offense was unable to match early runs scored by the Gorloks in the second game. “When you have an emotional win like that, it’s tough to re-gather and come back the next game,” Durbin said.

The team struggled to consistently match the strength of Webster’s hitting, only able to score one run with junior Bo Anderson’s home run in the second inning.  Bloom said the Bears’ pitching needed to be more consistent to hold their own in the second game.  “You cannot give up to that type of good team when they have a top arm on the mound,” he said. “We needed to pitch it better.”  He also attributed the lefty-on-lefty matchups as a hazard for the Bears, with Webster’s left handed hitters stacked together in the middle of their order. The game ended with a final score of 7-1 for the Gorloks.

So while the loss does sting—a 17-game win streak snapped by a crosstown rival—it is a chance for the Bears to learn from their mistakes. “I’d rather lose now and learn from it than lose in the postseason and learn from it and be out—so it’s not the end of the world,” Durbin said.

Loss is a part of the game: the past three teams who have won Division III NCAA titles have averaged 14 losses in their seasons, and each one seemed instrumental to their improvement. Bloom is confident that the team will learn from their mistakes. “Winning can mask certain things,” he said. “When you have a loss, those lessons sometimes hit home a little harder, and they last a little longer.”

Stories of baseball’s rise to success:

How WU baseball prepped one Bear to work for Cori Bush