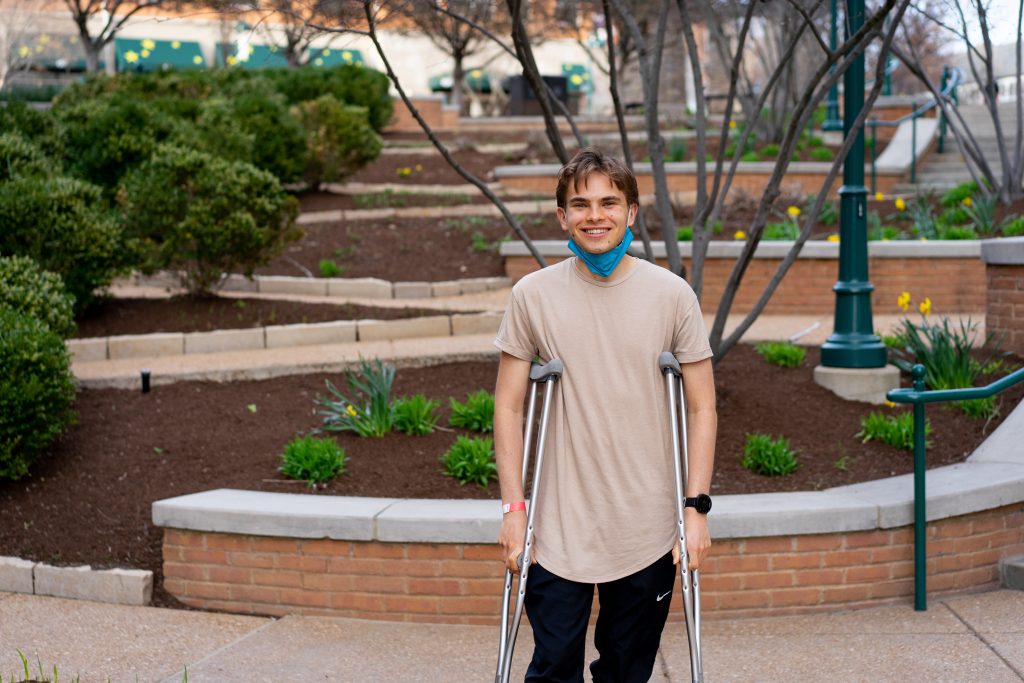 Freshman Kyle Puckett stands outside the Bear’s Den Wednesday afternoon. “After the first day of the first round I was like, ‘How do I only have one loss right now?'” Puckett said.

Freshman Kyle Puckett’s Chipotle order is a burrito bowl with chicken, black beans, pinto beans, brown rice, a pile of veggies and salsa. He even has a favorite Chipotle restaurant—the one located on South Shepherd Drive in Houston, Texas, where he is from. So when Puckett sat in Risa Commons last Thursday night to make a last-minute, arbitrarily selected men’s basketball March Madness bracket, Chipotle naturally came to mind.

Puckett knew that he wanted to base his random picks off of each college’s proximity to a restaurant, but his love for Chipotle wasn’t the only reason that he ended up choosing that restaurant specifically.

“I started leaning towards McDonald’s or Wendy’s at one point, but I felt like Chipotle is very distinct, and it would be kind of fun because it’s not something that you would think of as a national chain at the start,” Puckett said.

It was also a practical choice. Puckett avoided choosing a place like Starbucks, where bigger schools would dominate because of the likelihood of an on-campus location. According to Puckett’s logic, Chipotle was a “fair” choice—it exists throughout the country, and it’s most likely not located directly on college campuses.

Puckett used Google Maps to compare the distance from each college campus to Chipotle against their first-round competitor. If the gap in miles was a tie, Puckett narrowed his comparison to meters. If that data also resulted in a draw, the search was reduced to a stretch in feet. The campus closer to the restaurant was granted a spot in the next round, and this method continued until Puckett (and Chipotle) crowned a winner—Oregon State, located just 92 feet away from the nearest Chipotle. The entire process took no more than 20 minutes.

Puckett had very little confidence in his bracket, dubbed “Chipotle Challengers,” on the morning of Friday, March 19, the first day of the tournament. As the day went on and the results of the games began to align with his bracket, Puckett was in disbelief.

“I looked at it in the morning and I thought, there’s no way this thing does well,” Puckett said. “After the first day of the first round I was like, ‘How do I only have one loss right now?’”

By the end of the day, Puckett had correctly predicted the outcome of 15 out of the total 16 games played, and his bracket was ranked 12th worldwide on the leaderboard of the ESPN Tournament Bracket Challenge.

It did not take long for the news to spread of Puckett’s success. The Instagram account @barstoolwashu reposted Puckett’s first TikTok about his bracket, and soon after, many on the South 40 were aware of “the bracket guy” on campus.

His success didn’t end there. On Saturday night, after the end of the first round, Chipotle Challengers had risen to the rank of fourth worldwide on the ESPN leaderboard. At that point, friends and family were aware of Puckett’s lucky bracket.

“My brother texted me, ‘I hate you for this. I can’t believe that a bracket that you chose is beating a bracket I actually selected,’” Puckett said.

Puckett’s brother is a huge basketball fan—he’s big into sports analytics, and he studies each team while making his bracket. Yet Puckett, who rarely watches basketball, ended up with an almost perfect bracket, exemplifying how random the March Madness competition can be.

Some of Puckett’s friends had been keeping up with the bracket as well, constantly refreshing the website to see if Chipotle Challengers had risen in rank. Puckett made a second TikTok about his fourth place rank.

Unfortunately, Chipotle Challengers has slowly dropped since then, and the bracket now sits somewhere in the top 20,000 on the ESPN leaderboard. But Puckett isn’t discouraged, and he’s already thinking about ideas for his bracket next year, which he also plans to base off of a restaurant.

“I want to see if there’s a national chain that kind of comes out of nowhere,” Puckett said.

Our other coverage of basketball, both on and off campus:

“I could take a team of five”: Kameron Mack talks collegiate, casual basketball

Why are the Detroit Pistons serving as this year’s NBA giant-killers?