Back on friendly courts, tennis teams each improve to 2-1 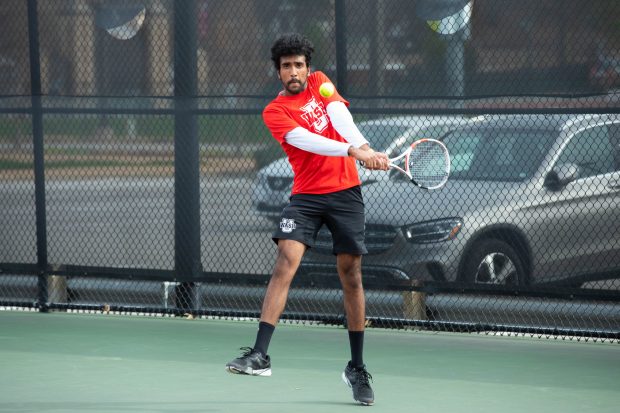 The Washington University tennis teams encountered success this weekend, as both the men and women beat DePauw University in Forest Park on Saturday afternoon and the men defeated Maryville University at home at the Tao Tennis Center Monday. With the wins, each team improved to 2-1 on the season.

For the women, the 7-2 victory over DePauw was significant because it was the first time the Bears had led after doubles. After falling 2-1 in doubles both of the first matchups of the year, Wash. U. focused on doubles play in practice leading up to the DePauw match, and their work paid off: Senior Laurel Wanger and junior Divya Sharma shut out their doubles opponents, 8-0, and senior Emma Sass and junior Hannah Johnston won their match in smooth fashion, 8-2. Senior Ally Persky and freshman Katherine Johnston fought their way to a close 8-7 finish, but could not pull off the doubles sweep.

Yet the Bears soon put the match away, winning five of the six singles matches to sail to victory. Persky lost her first singles set but battled back to win every game of the second set and dominate the tiebreaker.

“I felt like we did a really good job of setting ourselves up to come in and close at the net,” Persky said Monday. “We were really strategically aggressive at the right times, not trying to hit the winning shot right away but being patient and playing within ourselves, knowing that when we had the chance to come in and close it we took it.”

The Bears and Tigers are scheduled to face off again this weekend in Indiana. The two teams were initially supposed to meet last weekend, but that match was canceled because of COVID concerns on the DePauw team, Persky said.

“Now we get to skip the part where we figure out what’s going to work and what doesn’t,” Persky said of facing the same team in back-to-back weekends. “So that will change the dynamic a little bit.”

Playing in St. Louis for the first time this year, the men’s team shut out both of its opponents this weekend, beating DePauw 9-0 and Maryville 7-0.

Across the two matchups, the Bears only had one match go beyond straight sets, a tight 0-6, 6-2, 10-8 comeback victory for senior Daniel Li against Maryville. “We’ve only played three matches so far, but I’ve been really happy about it,” Li said. “The energy on our team is really great, just how everyone gels with each other and how everyone supports each other on the court.”

Playing the top singles spot for Wash. U. in both matches, senior Ethan Hillis excelled, losing just one game on his way to two two-set victories. He also paired with freshman Jeremy Ouyang for a couple of doubles victories, 8-2 over DePauw and 6-1 over Maryville.

[Daniel Li reflects on his time off from school]

One major storyline for the Bears this spring is the addition of graduate student Scott Altmeyer, who joined the team from Colby College, where he was highly ranked and the Intercollegiate Tennis Association Senior Player of the Year for the 2019-2020 season. “Now we’re lucky enough to have him on our team,” Li said. “He’s been a really great presence on and off the court, just being a super positive figure for our younger guys and keeping the morale and energy high for everyone on the team.”

The Bears do not play this weekend, but are scheduled to be back on the courts next Thursday for a home match against Webster University. Li was optimistic about the team’s next few weeks. “It really has impressed me how locked in we’ve started and how focused we are going into the next couple matches,” he said.

Other stories about the return to spring sports:

What the approval process looks like for spring sports

‘Maybe in the future I’ll get to do that again’: With indoor track season canceled and practices on pause, one jumper reminisces about his time on the runway and in the pit