Baseball prepares for Dubuque after roaring start against Illinois Wesleyan

The Washington University baseball team will take on the University of Dubuque in a double-header Saturday. Heading into those games, here’s what you missed from the Bears’ first weekend after nearly a year without competition.

From the only safe vantage point I could find, a small section of grass pitted behind the left field fence, the opening weekend of the Wash. U. baseball season looked different. Nearly a year after their promising 2020 season was canceled due to COVID-19, the Bears took the field last weekend against Illinois Wesleyan University with masks on and without fans (save for myself and a few hammockers). Two days of sunny skies and warm weather would typically attract a decent crowd to Kelly Field, but the metal bleachers remained empty this time, save for the smattering of players seated there to comply with COVID guidelines for dugout capacity. The echo of metallic bats rang true without the crowd to drown it out, and the ensuing silence broke only from the cheers of players themselves. Baseball is back, but not unchanged.

This year is a critical juncture for the program. After reaching their first no. 1 ranking in school history last spring before getting shut down, the Bears look to cement themselves this season among the juggernauts of Division III baseball. Having lost key starters in several positions, the onus now falls on younger players to step into the large shoes left for them.

[How WU baseball prepped one Bear to work for Cori Bush]

But while a chain link fence and over 400 feet to the batter’s box may have proven a wanting view of the game, it wasn’t hard to see Wash. U. players dominate many aspects of the three-game series. As in past years, stellar starting pitching led the weekend for the Bears. Staff ace senior Ryan Loutos set the tone with 5.1 innings of one-run ball in the opener and senior Troy Bauer continued the momentum in game two, burying Illinois Wesleyan hitters from the left side for five shutout innings, allowing only one hit in the process. The series finale saw junior Austin Sachen deliver 4.2 stellar innings, striking out eight and letting up just one hit (a home run, the Titans’ sole score in the game) in what felt like a breakout performance for the big lefty. Freshman pitcher Clayton Miller also made a splash in his debut on the mound, tossing 3.1 innings of one-hit ball, tallying six strikeouts and no runs allowed in Sunday’s action. 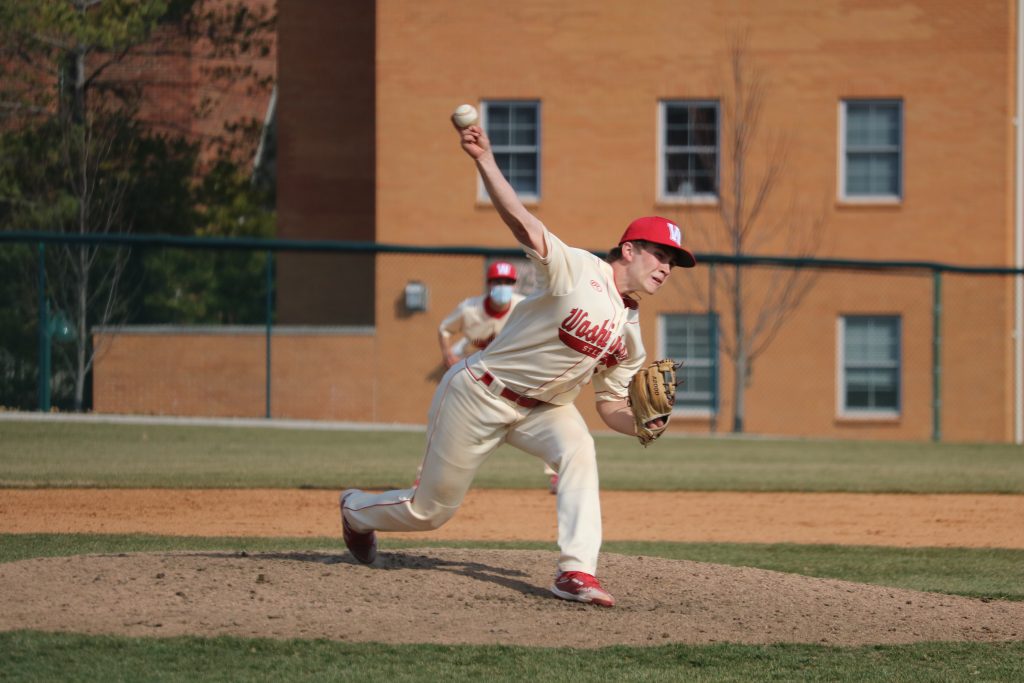 Shortstop and 2019 University Athletic Association Rookie of the Year junior Caleb Durbin led the offensive charge in all three games, tallying nine runs batted in on six hits, including two deep home runs onto Forsyth Boulevard. His complement across the middle infield, junior Tim Van Kirk, backed him up with five RBI on eight hits, including a double and two triples. As a whole, the offensive attack for the Bears put up 33 hits and 24 runs in three games, a promising mark to start the season.

Junior Caleb Durbin, who drove in nine runs in the three games and has a 1.182 OPS to start the year, prepares to score.

But even while all major phases of the Bears’ game performed exceptionally in their first weekend, the most impressive part of it all was how sharp it looked; the defense made the hard plays look easy, whether it meant turning a double play, blocking behind the plate or simply taking a smart angle to a ball hit in the outfield. Not only did the Wash. U. offense score, they strung together strong at-bats and delivered timely hits. Runners ran wild all weekend, recording 15 steals and giving hitters the opportunity to drive them in. They capitalized on errors—the Titans’ defense had holes and Wash. U. found them.

This spring looks different than the average Wash. U. baseball season—but more than that, it feels different. After a heartbreaking end in the 2019 NCAA Regional and losing a promising season in 2020, the Bears finally look poised to challenge for the title of top dog in Division III baseball and make noise late in the season. Currently ranked at no. 7 in the nation, they will have to continue their strong play if they mean to rise in the standings. But from the admittedly small sample size of this Saturday and Sunday, it seems as if 2021 could be the year the Bears have been looking for.

Editor’s Note: Staff Reporter Grady Nance was a member of the Washington University baseball team during the 2018-2019 year.

Other stories of teams returning to competition:

As tennis season heats up, what’s it like to be competing again?