As tennis season heats up, what’s it like to be competing again?

Across her first two seasons on the Washington University women’s tennis team, junior Hannah Johnston posted a 6-1 record in singles. Now, after winning her first match of the year in the Bears’ victory over Northern Iowa last Saturday, she’s looking to add to that record. This week, I talked to Hannah about life since the pandemic started, her family’s tennis proclivity and her hopes for the rest of the season.

Student Life: How’s your semester been?

Hannah Johnston: It’s been good. I feel like I’ve gotten a little bit too used to COVID school, so we’ll see what it’s like next year. But yeah, classes are good, tennis is good. What about you, how’s your semester been going so far?

SL: I’ve not at all gotten used to COVID school and obviously for me, tennis is not going well either. But I can’t really complain. When did you start playing tennis?

HJ: I started playing tennis competitively when I was 11.

SL: That sounds pretty early. Were you involved in other things in high school or was it mostly tennis and school?

HJ: I guess, it was largely just tennis and school. In high school, my junior and senior year I also did cross country. But yeah, most of my life was just: get to school, play tennis, do homework, repeat.

HJ: I mean it was the combination of the academics and athletics. I was excited about the classes. I was excited to be in an academic environment where I felt like I would be pushing myself and surrounded by other people that also wanted to push themselves. And the opportunity to play tennis on such a good D3 team was really exciting for me. 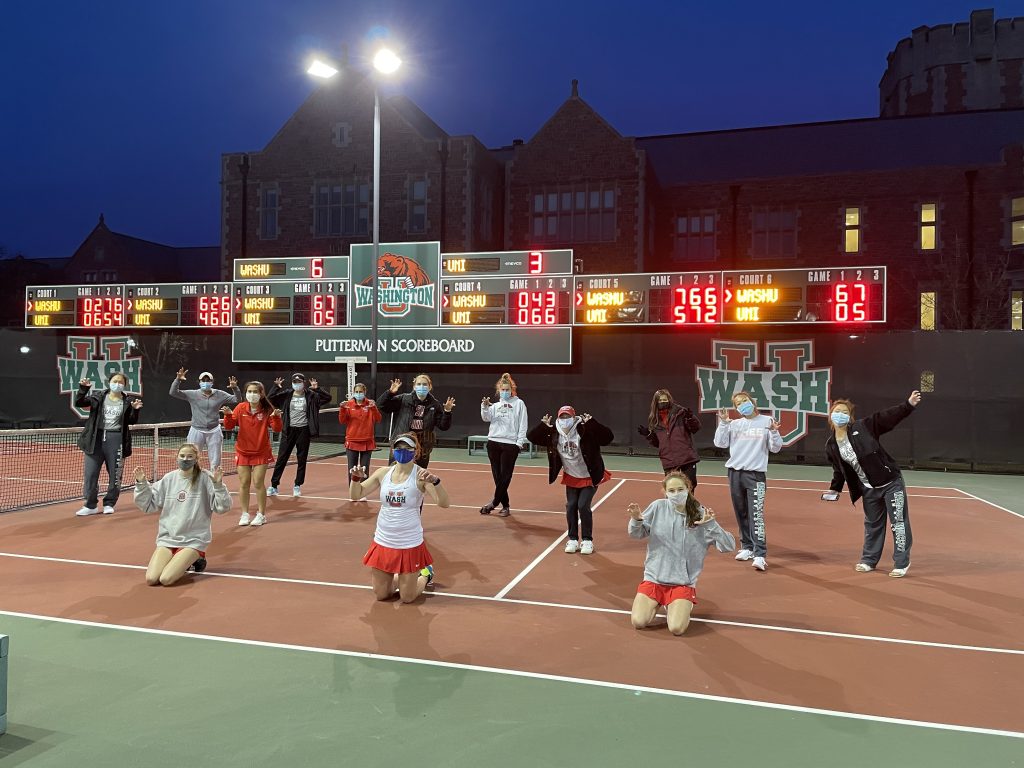 The women’s team celebrates after last Saturday’s win over the University of Northern Iowa.

HJ: I went home over the summer, and then at the start of the semester, I came back a couple weeks early so I could quarantine and just get used to being in St. Louis again. And then I went home for winter break as well. It’s been pretty evenly split between home and here.

SL: Are you an avid music listener?

HJ: Yeah, I would probably describe myself that way.

SL: Would you recommend that album?

HJ: I would recommend that album!

SL: I’ll give it a spin then, I’ve never heard it. I also think it’s fair about people not listening to music at the start of the quarantine. I used to listen to music on the way to things. Like I’d be walking to class, or going places.

HJ: Exactly. Suddenly I had nowhere to go, so it’s hard to listen to music at all.

SL: I know they’ve gotten some pretty bad weather down there recently. Is your family doing alright?

HJ: Yeah. They lost power for a while. Several days I think. Luckily enough, their pipes didn’t burst. They had enough food. Everybody ended up okay.

SL: Great to hear. By any chance do you have a little sister?

HJ: I do. I have a younger sister who’s a freshman on the team.

SL: What’s it been like having her around the team?

HJ: It’s been great. I think in juniors, everything is super individual and it’s very competitive and everything is stressful. Being on the team with her now is just so nice. Getting to enjoy the sport that we love together has been really wonderful. 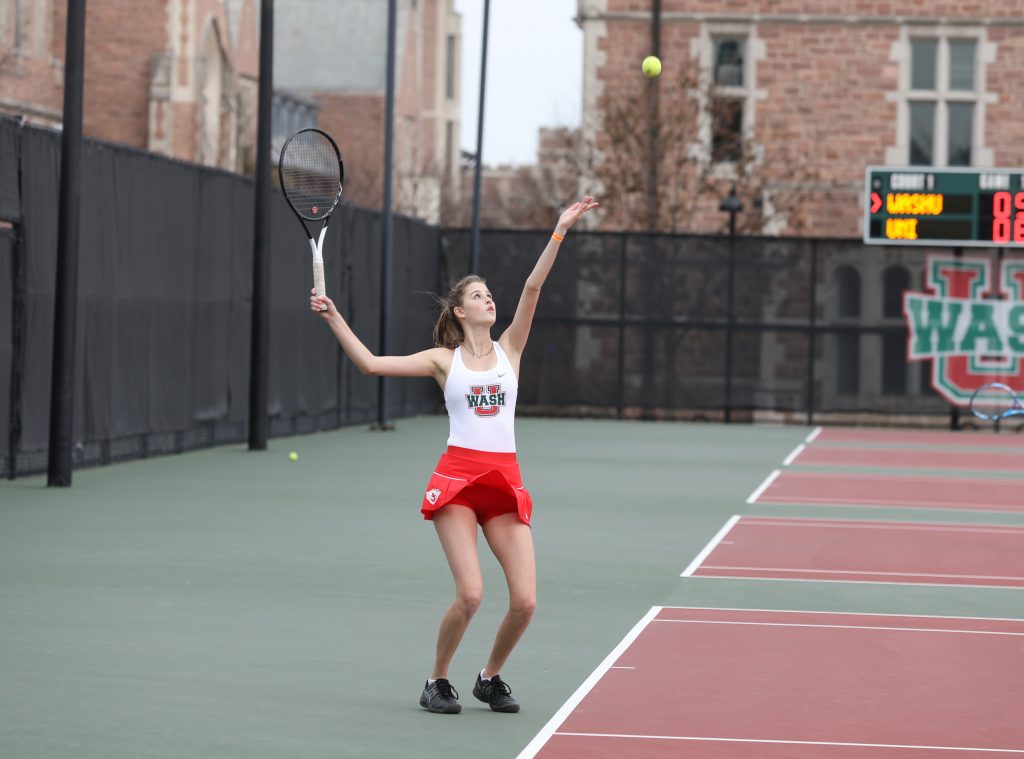 Katherine Johnston, Hannah’s sister, sets up to serve against the University of Northern Iowa last Saturday.

SL: Were y’all competitive growing up?

HJ: We were always in different age divisions, so to a certain extent we couldn’t be competitive because we were never going to play each other in tournaments, but we always practiced together and that was very competitive.

SL: I reckon that steel sharpens steel in that situation. Always being able to practice against somebody else who’s also pretty good at tennis.

HJ: Yeah, it’s nice to always have someone that you can hit with to warm you up before a match.

SL: I saw that you and your father played national grass courts in Boston?

HJ: Yes, that is something that I do.

SL: What are those?

HJ: They have four father-daughter national tournaments every year. They’re usually on different surfaces. My dad and I every year—we were trying to do every year but it got canceled this past year because of COVID—we play in Boston in the grass court nationals.

SL: How long have y’all been doing that?

HJ: We’ve been doing it for two years. This would have been our third.

SL: Gotcha. Is he good at tennis?

HJ: Yes, he’s also very good at tennis. He played at Brown for two years, I think. He was also a college player.

HJ: She plays tennis now; she got more into it because my dad played it. But my entire family now plays tennis.

SL: That sounds like a really fun to family activity.

HJ: Yeah, there are a couple days—it doesn’t happen that often because we all have pretty busy schedules—but every once in a while, my entire family will go up to the club where we play tennis, and we’ll just hit with each other for a couple hours, and it’s so nice. I hope I have something like that when I get older.

SL: At the tennis home opener this season, you and your sister both won your matches. How long had it been since you had a match at Wash. U. before that?

HJ: Oh wow. I’m trying to think. Last season, we didn’t have any matches at home, because it was too cold, and in the fall, we don’t play at home. So would have been the spring of my freshman year. So almost two years, I think.

HJ: Yeah. It had been a while.

SL: What was it like being able to compete at home?

HJ: Oh, it’s so nice. There’s something about being at Wash. U., that just feels very motivating. It’s never more clear to me than when I’m playing at the Tao Tennis Center that I’m representing Wash. U., which is really an exciting opportunity, and I enjoy the moments where I get to really feel like we are Wash. U. and we’re coming together and just representing the school well. I feel like playing at Wash. U. really facilitates that feeling. It’s so nice.

HJ: I just hope we get to keep competing and keep representing Wash. U., keep giving it all on the court and seeing what we’re capable of .I think it’s been really unexpected that we got to do this so soon, and I think we’re all super grateful for the opportunity. So, yeah, just getting to continue to compete, whether that ends up being just in practice or in matches, getting to continue doing that is my hope for the season.

Our recent athletes of the week:

Two years after shaking with nerves in his first appearance, Matt Lopes cannot wait to get back on the mound