‘Every day I feel like there’s a little bit more light’: Anthony Azama on the uneasy yet hopeful start for this semester’s sports

Toward the end of a recent 20-minute conversation with Director of Athletics Anthony Azama, he sounded tired.

“I would say over the last 11 months, this is definitely the toughest time of my life,” he said. “I could probably say that for a lot of the administration and coaches as well. Because we’ve not been able to do what we’re passionate about, what we enjoy.” 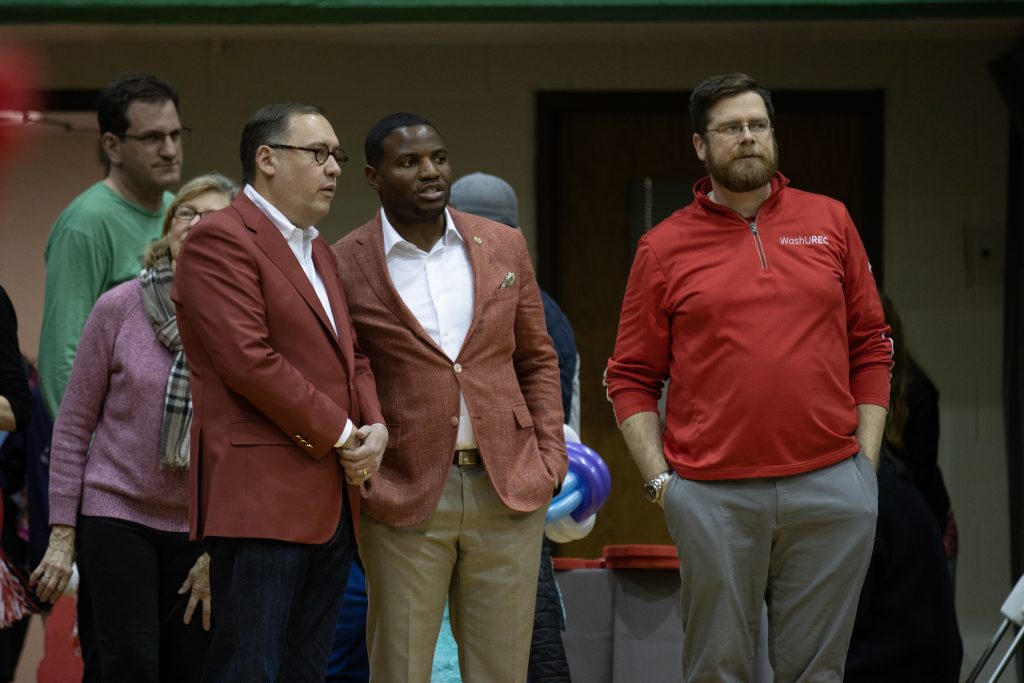 Director of Athletics Anthony Azama (center) talks to Chancellor Andrew Martin during a basketball game against the University of Rochester last season.

For 11 months, the athletic department has worked tirelessly to scrounge up what little normalcy remains during the pandemic. Each part of the department – from sports medicine to communications to event management – has been, to quote Azama, “burning it on both ends” to ensure that student-athletes can have something. Not necessarily a season, or even a few games. Just something. Figuring out what that something can be has taken a toll on the department. However, the alternative – another season where Azama is required to inform national championship contenders, promising young teams and seniors in their final years that their season must end – is too brutal to fathom doing twice.

The athletic department has been working with Washington University’s COVID monitoring team to put together a plan for competition that prioritizes the health, safety and well-being of athletes, coaches and staff. For sports with low risk of transmission, such as swimming and track and field, those competitions are coming soon. Last weekend, Wash. U. bested Rose-Hulman in a swim meet, the first in-person competition that the Bears have participated in since March. Not everything will be the same when competition resumes: in addition to the basic game contract that schools sign, there will be additional agreements around testing. Spectators will more than likely sparse, increasing the importance of quality streaming for eager fans and families wanting to see the Bears back in action.

Competing with other local colleges appears to be another option for Wash. U. this semester. Schools like Fontbonne University, Webster University and Greenville University might be viable opponents thanks to their proximity. “Obviously we’re not signing anything until the COVID monitoring team gives us a green light, but our coaches have been very proactive in having conversations with local competition in a certain mile radius, because obviously we would do no overnights to be able to give our student-athletes a chance to compete,” Azama said.

After a long year, things are looking up for the Wash. U. athletic department. Sports are taking place. Teams are practicing. There appears to be ample reason for optimism about the winter and the spring. If exhaustion laced Azama’s voice when we spoke, it was weaved with equal parts hope.

“I just want to work every day with this leadership team and with these coaches to see how we can understand that it’s a pandemic but how we can create some semblance of normalcy,” Azama said. ”Ultimately, being able to compete at the end of the day is challenging, but every day I feel like there’s a little bit more light into the tunnel.”

No school, more tennis: What life has been like for one student-athlete who took the year off

From isolation to community: How WU BLAC has been working to better the experiences of WU’s Black student-athletes