‘Control the controllable’: Cross-country makes it work during COVID-19

Cross-country is a competition of fitness and a test of who can push through the most pain. Workouts for the sport, whether reps on the track or longer tempo runs, are meant to be challenging. But for months now, COVID has taken away the most tangible way that athletes test the results of their training sessions: track meets. Without the in-person competitions that encourage players to push themselves to their limit every day, Washington University cross-country head coach Jeff Stiles has used virtual meets to give athletes an opportunity to run a personal best. 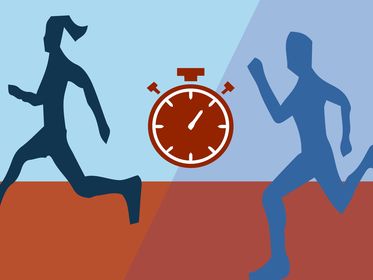 Stiles has had to be creative to train his cross-country athletes with the variety of limitations imposed by the school and by the NCAA. Across the NCAA Division III schools, restrictions look different across the board. Some schools were able to have in-person meets, while some were not even able to participate in virtual competitions. This has given an advantage to the programs that were able to compete in person this semester, but Stiles has done his best to give his athletes the chance to prove their fitness. He has been telling his team to “control the controllable.” With the virtual meets, he has been doing just that.

To work within the guidelines, Stiles had to stagger starts and have multiple races to not have too many runners near each other.  These adjustments create distinct experiences between regular meets and virtual meets. “You can’t replicate it to, you know, to a perfect degree,” Stiles said.

Megan Girmscheid, a senior on the team, agreed that the virtual meets were not a perfect match to regular competition. “When you’re running against people from other schools, there’s definitely a lot more adrenaline, a lot more pressure that you feel, which I think definitely produces faster times than just a time trial,” she said. Still, given those limitations, Girmscheid said that the time trials were a good way to get feedback on her fitness.

The performance during these simulated race conditions depends a lot on the individual athlete. “The distance is the distance. So if you have the opportunity to go to run it, no one’s stopping you to run faster. But there’s no doubt that the reality, it’s not the same,” Stiles said. “But it’s the hand we were dealt, so that’s the hand we played with.”

For many of these athletes, this has been their third consecutive season canceled because of the coronavirus, as some of them had their indoor and outdoor track seasons canceled as well.  “At this point, we were so kind of starved for that type of racing environment, so this is really exciting for us to be able to come back to,” said Mason Wong, a sophomore on the team.

For Wong, the down period during the spring competition season helped him reaffirm his dedication to the sport. “That’s been something interesting to explore—why do I really like this sport? And do I like it just because I want to win? Or is it because I really enjoy the feeling of running? And what I’ve learned is, I do really enjoy the sport.” This new outlook has been reflected in his performance as well—Wong has run a personal best at each of the consecutive virtual meets this fall.

Girmscheid said that the pandemic made her consider different priorities.  “I don’t think I really lacked the motivation to do it. I think sometimes though, it was hard to feel like it was going towards this greater purpose—we always say on our team that we’re doing this for something bigger than ourselves,” she said, “and I think it was a little bit harder to feel that during the semester.”

As Girmscheid finishes her last cross country season at Wash. U., she reflected that virtual events can only make up for so much of the missed competitions season. “It wasn’t just the competitions that I knew I was gonna miss out on,” she said. “There’s a lot of other aspects to the season and to traveling that I was definitely disappointed to not have, like time with teammates and bus rides.”

Ultimately, the virtual meets are not able to replicate a race with cheering crowds and head-to-head sprints to the finish line. However, they are a tangible goal to train for—a luxury that the other sports at the Wash. U. do not have right now.  And despite the restrictions on the team, Stiles remains continuously impressed by the leadership and the unity within the team. “That is something that I couldn’t be prouder of inside—to look at that and think that this group has stayed invested,” he said. “Because if you’re still doing that, at this time, you haven’t given up.”