A night with the WU quiz bowl team

It’s 6 p.m. on Monday night, and all eyes are glued to the Zoom chat box. Typically, the various competitors on my screen would be gathered in person, buzzers in hand. Tonight, however, is not a typical practice for the Wash. U. quiz bowl team. Yes, COVID-19 has forced its members to adapt to some unusual circumstances. And yes, players will be buzzing in using the aforementioned Zoom chat box. But in light of the past few days, everyone’s focus has been redirected to the tragedy that many of us—even outside of the quiz bowl world—have been mourning: the death of Alex Trebek.

Within a given game at a quiz bowl tournament, teams are read a sequence of clues that start out relatively obscure and become more generic with each hint—the goal being to guess the answer as soon as possible. And Jeopardy!, itself rooted deeply in trivia, is largely the same at its core. Though there are some definite distinctions between the two (in Jeopardy!, for example, only one clue is given per question), watching the game show has been integral and inspirational to many players on the Wash U. quiz bowl team. 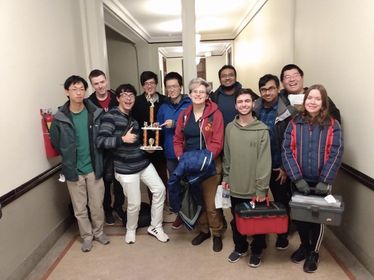 The Washington University quiz bowl team celebrates with
a trophy after the 2020 ACF Regionals earlier this year.

Senior Hannah Manoj, the club treasurer, was one of the many members who spoke passionately about Trebek’s legacy before the start of practice. Manoj’s mom learned English through the TV show, and Hannah herself became a quiz bowler in high school in large part because of the many hours she spent watching Jeopardy! when she was younger. As a tribute to the iconic Jeopardy! host, Manoj treated the group a series of questions excerpted from an old episode featuring Wash. U. associate professor (and my former teacher!) Ari Stern, my first chance to observe the madness of quiz bowling firsthand.

Before I could even process the questions being asked, buzzers were going off left and right. Answers to obscure literary and scientific questions were delivered with confidence and ease, all at breakneck speed. Fire was an important part of this landmark, which stood for about 1500…The Lighthouse at Alexandria, duh!

At tournaments, questions are longer and more drawn out, but the keys to being successful remain remarkably similar. Teams are made up of four players, and are usually crafted with the goal of maximizing categorical strengths: A good team, for example, might be made up of a history buff, science nerd, literary genius, and generalist, and should be able to cover most of the questions that are usually asked. Widespread, deep-rooted knowledge is crucial, as is having the ability to think critically under immense time constraints.

At first glance, the immense bastion of knowledge required to become an excellent quiz bowler is intimidating, but Manoj and current vice president sophomore Mia Bloss are working diligently to expand the club’s appeal and encourage more students to join. Bloss herself is the textbook example of what the club’s leadership hopes to accomplish with its future recruiting efforts. She discovered quiz bowl at the activities fair, and joined despite having no experience with quiz bowl or competitive trivia.

“Something that our current executive board has been tackling is the stereotype that quiz bowl is a boys’ club…” Manoj told me in an interview. “As a woman of color, it’s been really great to be able to provide a community and create open places for communication so people can share what they’re feeling.”

For Manoj, Bloss and the many other quiz bowlers, the effort is worth the reward; some of their best college memories have come from the quiz bowl team. Like any traditional sports team, the club often road-trips to tournaments. “Last year we drove up to Ann Arbor in the middle of a snowstorm,” Bloss said with a smile. “It took a long time, I was in the middle back seat, and we got there at 3 a.m. With the tournament the next day, there were times where we couldn’t even tell if we were on the road anymore. It was so surreal, but it’s those kind of harrowing times and, of course, less harrowing ones, where you’re really able to bond with your teammates.” Manoj has similar memories from the same drive.

Despite transitioning online during COVID, the team has been able to carry this sense of comradery into the fall semester. Freshman Aryaman Jaiswal has been studying remotely this semester, and credits the quiz bowl team with allowing him to connect with other students despite not being on campus. “It’s been great to meet a lot of people who share a common interest and at the same time do something I love,” Jaiswal said.

This year, StudLife sports has been expanding its horizons to some unlikely places, and after spending some time with the quiz bowl team, I’m ready to declare quiz bowling a sport of its own.

At its heart, the quiz bowl team—for all its quirks and intricacies—shares all the important values of a great sports team. Yes, its members are driven. Yes, they are competitive. But more than anything, these players’ bond with their sport and with each other makes it a joy for a new fan like me to watch, even if we are still on Zoom.

Editor’s note: After publication of this article, Hannah Manoj, the quiz bowl treasurer, wrote to Student Life to clarify her comments about past leadership of the club and quiz bowl more generally. She said that while men have long dominated quiz bowl, many East and South Asian men have been in quiz bowl positions of leadership. To reflect this clarification, we have removed part of her quote that focused specifically on white men.