Athlete of the Week | Sports

‘I always want to be pushing myself 100%’: Karisa Grandison on keeping her mind and game sharp

Karisa Grandison is a sophomore women’s basketball player from Cincinnati, Ohio. She had a well-rounded freshman season, scoring 50 points, grabbing 47 rebounds and setting up her teammates for 43 assists. We talked to Karisa about how she’s stayed sharp in basketball while remaining at home as well as what she wants to improve upon for the next time she suits up for the Bears. 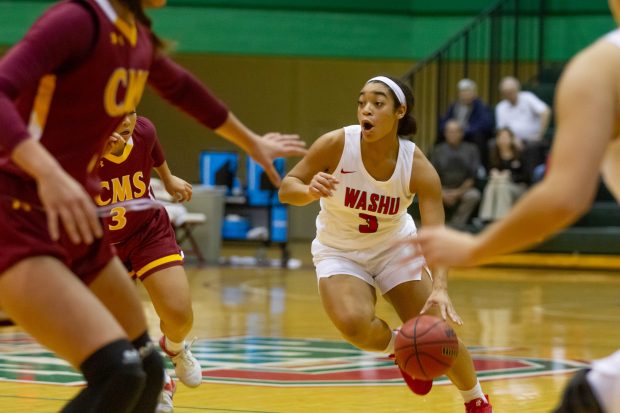 Student Life: Are you in the St. Louis area?

Karisa Grandison: No, I’m living at home this semester.

SL: Does that worry you?

KG: Yeah, a little bit. Yeah, probably. Definitely has to do with global warming, but, you know, at least the weather’s nice.

SL: I can appreciate that optimism, The world might be ending, but at least it’s kind of pleasant.

KG: Yeah. At least I can go outside in a T-shirt.

SL: It will be nice to wear a tank top at the end of the world. That seems like a lovely experience. I was gonna ask you what practices have been like but I didn’t realize you weren’t in St. Louis.

KG: Oh yeah, I could not tell you.

SL: Fair enough. Have you been practicing on your own?

KG: Yeah. Me and three other girls have stayed home this semester. So [head coach Randi Henderson] sends us the workouts that they do three days a week. And we just do them on our own.

SL: Are you coming back next semester?

SL: Do you know if the basketball team expects to play any games this season?

KG: I believe they do expect to play some games in December and possibly play some local teams next semester. But there will be no official season.

SL: With everything that has been going on, how do you stay motivated?

KG: I think it’s really been my friends that have been keeping me motivated. Trying to stay in touch with people and trying to let people know when I’m feeling overwhelmed, ‘cause usually my friends are feeling the same thing, and knowing that I’m not alone in that feeling has been really helpful.

SL: At a time like this, what motivates you to get better at basketball?

KG: Basketball for me right now is super weird because usually it’s a team sport and right now I’m doing it completely on my own. This semester, with how many classes I’m taking and how often I’m just staring at my laptop, sometimes going into the gym is the only time I have where I’m not doing schoolwork. So when I’m in there I want to make the most of my time. I think that’s what’s been motivating me to improve my skills. With basketball, it’s so nice. You can set a simple goal, and then you know whether you’ve met it or not with each time you go into the gym. It’s like, “Okay, I want to make this amount of shots.” And either I met that goal or I didn’t. You’re controlling what you do and overseeing yourself, instead of with classes where it’s professors. You do the work and you hope it’s what they want and you’re not always getting immediate feedback.

SL: What do you think the best feeling on the basketball court is?

KG: My favorite moments are always when my teammates succeed. Like if someone’s having a really good night and their shot is on, seeing the joy in my teammates’ faces and hyping each other up. That’s the best feeling.

SL: This is why I’m not good at a sport like basketball. I would have definitely said something more selfish than what you just said. That’s wonderful.

SL: This year and last year, the basketball team is pretty young with just a handful of juniors and seniors. What was it like being on a team of primarily underclassmen?

KG: There were definitely a lot of rough patches in the season, and there was a lot of learning that had to happen really early on. When you go from high school to college basketball there’s definitely a learning curve. So it was a challenge to learn everyone’s playing style, and to become close with new teammates and to also become integrated in a new coaching style. It was difficult, but it was also nice having so many people who were in the same position as me, because there were so many freshmen. We were all in it together, and we were all struggling through it together.

SL: Do you feel like you’ve become a leader on the team?

KG: I don’t know. I think with our team we have leadership in waves. I think everyone can be a leader in their own way. I think I’d like to say I’ve become a leader, but I don’t get to see my teammates as often. I don’t know if that would be an accurate statement for this season. I do believe I’m one of the leaders on the team.

SL: Fair enough. While doing some research for this interview, I discovered a camp evaluation of you from 2017. I wanted to get your opinion on it’s accuracy.

SL: It says your size and strength make you a difficult matchup for smaller guards. Do you believe that’s true?

SL: It also said you needed to develop a consistent range. Do you think your shooting has improved in college?

SL: Has it improved over the recent months as well?

KG: Yeah. Being in the gym by myself, I do more shooting drills. We have certain timestamps for each drill, like how much time we’re supposed to dedicate to each drill. But if I’m not satisfied with how many shots I’ve made, I can always take more time. I definitely think I’ve dedicated more time to shooting over quarantine. That’s definitely helped my shot improve.

SL: Gotcha. So I’m really bad at basketball. I can’t shoot, I cannot dribble, I have a very limited post game that includes a fade away with no elevation and a really slow post hook. If we played a game of pick-up to 11, what do you think the score would be?

SL: I think that’s very generous to say that I would make a shot.

SL: Well, thank you. My prediction was actually 11-1. I thought I’d get a pity lay-up at the end. Here’s another fun one: You went to Sycamore High School in Cincinnati, right?

KG: There’s this one tree called the ylang-ylang tree. The flowers on it are used for the scent of Chanel no. 5, I believe. I think that’s my favorite tree.

SL: What interests you about psychology?

KG: I like understanding why people act the way they do. I like studying human interaction and psychology meshes well with that.

SL: Do you ever find yourself psychoanalyzing people?

KG: Not without their permission.

SL: So if you did find yourself psychoanalyzing somebody accidentally, would you tell them or would you keep your observations to yourself?

KG: I would keep it to myself.

SL: Mmm, that calls into question your previous answer.

KG: Umm, well. Okay, so maybe occasionally it might happen. But I wouldn’t tell someone unless they asked me. I wouldn’t give unsolicited advice or anything.

SL: So you would never just be talking to somebody and just tell them, “This reeks of psychology.”

KG: I’d like to be able to say that my mindset has improved and just the way I approach the game. I’m so lucky to be able to play a sport in college. Every time I get into the gym, and every time I’m with my teammates and every time I play in a game I want to be making the most of that opportunity. And I never want to have any regrets on the court, whether that’s in practice or in lift. I always want to be pushing myself 100% and giving everything I can. And always working to improve something, whether it’s like my speed or my shot or my passing accuracy, I always want to be working towards being better. That’s what I want my mindset to be next season.