In 2018, Grayson Allen had a ridiculous performance at the NBA combine. His time in the lane agility drill, which tests lateral quickness, was one of the five fastest ever posted at combine. He followed that up by posting a vertical jump of over 40 inches, the sixth-best in his draft class. Allen’s performance at the combine should have announced to scouts that he was an athletic marvel.

Instead, his NBC Sports draft profile says what draft profiles for all white basketball players do: “sneakily athletic.”

It’s not NBC’s fault that they didn’t notice his stellar athleticism at Duke. Allen was known more for his dirty play and highly competitive spirit while there. But even when he put an exclamation mark on his ability in front of the entire league, NBC still chose “sneakily” as the way to discuss him.

This is peak white basketball.

“White basketball” describes a style of play and perspective expressed by scouts and pundits, somewhat unintentionally. It captures that the metric that white players are judged on is often different from the metric that their Black teammates are. Words like “cerebral,” “hustle” and “intangibles” are thrown around, usually to mean absolutely nothing besides “this white guy knows basketball.” Rather than praise their athleticism, pundits pile on absurd phrases to get across just how hard white players work on their craft. They’re “real gym rats,” “gritty hustle guys,” “first-one-in-the-building-last-one-out” kind of guys, etc. On the other hand, if a white boy can, in fact, jump, they get the label of “sneakily athletic.” At this point, sneaky athleticism basically translates to “this guy looks more like he’d drive a Subaru than play basketball.” These men are professional athletes. I personally think their athleticism is painted neon, but nonetheless the description continues.

It’s hard to ward off the feeling that “white basketball” is the manifestation of the same racial categorizations that kept black players from playing quarterback in the NFL.

A more generous interpretation of “white basketball” is that it is about the fundamentals. It puts in perspective why players like George Mikan and Bob Cousy were great. In an era before otherworldly athleticism was a baseline for NBA players, they succeeded. If they played now, they’d be role players. But they were competitors who played the game the way Dr. Naismith intended. Players in that tradition deserve respect, but if that tradition excludes Black athletes who excel through determination then we have to question whether “white basketball” is about the form or the practitioners.

Marshall, Mason and Miles Plumlee are all tall, fundamentally sound basketball players of a bygone era. They’re talent levels range from “Walmart-brand Marcin Gortat” (Mason) to “Dollar General Marcin Gortat” (Marshall). They aren’t key contributors, but they play the game with moxie. And that is, quite literally, all that matters.

Fredette fits the mold of a “white basketball” player perfectly. Coach’s son, a cerebral player, conducts an offense like an on-the-floor coach. Unfortunately, Jimmer Fredette seems to lack the intangibles and talent to match the game he plays. Otherwise, he’d be near the top of this list.

Here’s a guy who gives 110% 100% of the time. High motor, solid fundamentals. Great rebounder at his size. This guy rocks. He’s the modern Bob Cousy.

At 6’5” and 245 pounds, Rockets’ P.J. Tucker is built more like an NFL linebacker than a NBA center. But what Tucker lacks in size, he makes up for with grit and ingenuity. He fights hard enough to grab rebounds over larger players. His sturdy frame prevents him from getting bullied by anyone besides the most elite of post players. He is not a dominant athlete, especially for his position. But through sheer force of will, he has become a decent one.

If P.J. Tucker doesn’t fit within the realm of “white basketball,” no one does.

Robinson’s steady improvement over the last six years shows his dedication to his craft. Great fundamentals on his shot: quick release, able to fling it from different platforms. He’s been locked in the playoffs, earning the nickname (from me) “white Ray Allen.”

He does whatever he needs for his team to win. Lopez lacks the athleticism to be an effective hustle guy, but he has the motor for it nonetheless. Honorable mention: Ersan Ilyasova. 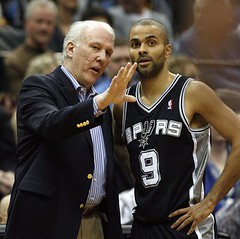 Watch the Spurs play and tell me you disagree. My man is the king of “white basketball.” He kept the torch burning in the dark ages (the prime of Jason Williams).

The sexual tension between Mark Cuban and unheralded European prospects.

Horford is another undersized front court player who excels due to his high basketball IQ. At 34 years old, he has lost the agility that once made him an elite NBA forward, but he remains a solid player as a result of his exceptional defense and on-court leadership.

The most controversial selection of the whole list. Joker is arguably the best “white basketball” player in the world. But he doesn’t play “white basketball.” He is not a hard-nosed defender. His athleticism is so sneaky, I’d call it bigfoot. He recently transformed his body over the quarantine, but for most of his career, he was built like a snow-covered mountain. His strongest trait as a “white basketball” player is his toughness. He’s rarely injured and he fights through a lot of contact as he conducts the Denver offense. But he’s not tough in the normal way. Larry Bird fought through injuries. Jokic only fights through indigestion. He is this high on the list because his craftiness and cerebral style of play have been replicated by few others. But I could see an argument for him moving down.

See the top 10 later this month.