After Stahlhuth resigns, women’s tennis looks for someone to continue her legacy

When her car was stolen earlier this year, the first phone call senior Ally Persky made was not home to her parents. It was to the Washington University women’s tennis head coach, Kelly Stahlhuth.

Persky and Stahlhuth had become close over their three years together on the team, with Persky viewing her coach as a sort of mother figure. Stahlhuth walked her through the steps she would need to take to retrieve the stolen car and, weeks later, was the person who drove Persky to check out the car when it showed up at a tow garage. The coach was there throughout the process: even when the garage let only Persky in to inspect the car, Stahlhuth remained on the phone with her, guiding her through the process.

“I just had this feeling that Kelly was a member of my family,” Persky said of that interaction, observing that the moments during and after the stolen car situation encapsulated Stahlhuth’s selflessness.

In interviews this summer, players said that same caring quality and a desire to go above and beyond in terms of off-the-court support were what helped enable Stahlhuth to bring the Bears to 11 straight playoff berths between 2008-2018 and 12 overall since she joined Wash. U. in 2005.

Now, the players are part of a search to find a new head coach with similar qualities, as the University seeks a replacement following Stahlhuth’s July resignation to take a position as an assistant athletic director at a St. Louis high school.

Senior Laurel Wanger, who along with Persky and senior Emma Sass serves as a team captain, said that the search for a head coach revolves around finding someone who can build upon Stahlhuth’s successes. Stahlhuth led the team to a 215-115 record in her 15 seasons with the Bears, including four Elite Eight appearances.

Yet so many of Stahlhuth’s successes came off the court as well. “We’re looking for someone who wants to get to know every player on a personal level, because that was something that Kelly did really well,” Wanger said. “She took the time to get to know us and made us feel comfortable coming to her with any issue, tennis-related or not.”

[Check out our story on Stahlhuth’s replacement, Wash. U. alum Paige Madara]

Athletic Director Anthony Azama echoed that sentiment. “To say that [Stahlhuth] is a good coach really doesn’t describe the person that she is and how her approach to life has rubbed off on everybody in the athletic department. She’s just upbeat, goes into things without preconceived notions,” he told Student Life. “A great source of wisdom for an athletic director as well as for administrators and student athletes, she will be missed.” 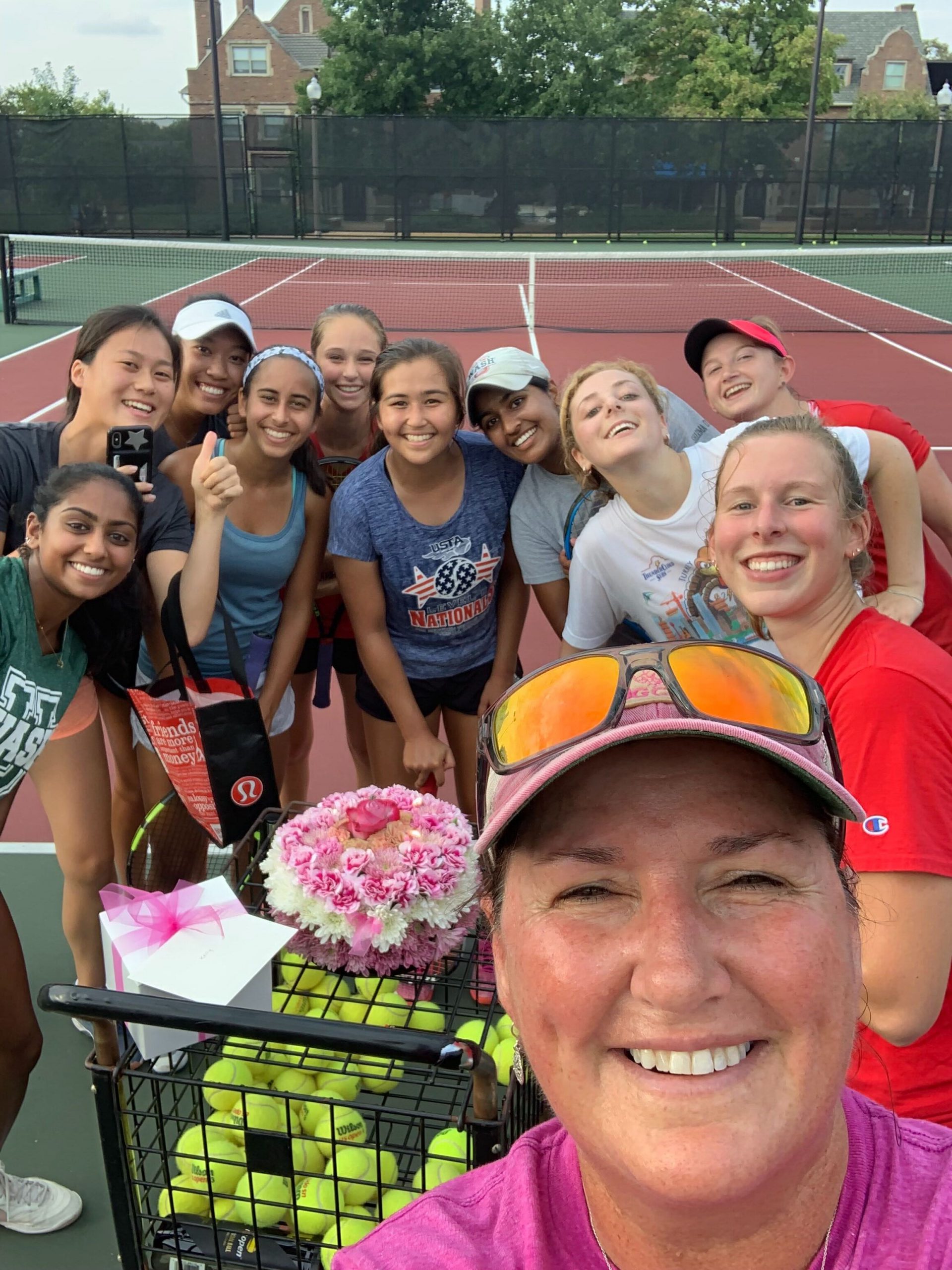 Kelly Stahlhuth smiles with the women’s tennis team last fall at a practice. Stahlhuth accumulated a 215- 115 record in 15 seasons as the Bears’ head coach.

At one point in the fall of 2018, senior Emma Sass found herself feeling stressed and overextended, with numerous extracurriculars and responsibilities weighing her down. She reached out to Stahlhuth and the pair took a walk around the track at the Athletic Complex to talk out Sass’ thoughts. “It was great for me. I just talked it out, figured out what I needed to do and then I could move on, and I felt a lot better,” Sass said. “I think a lot of the team has stories like that.”

That off-the-court support was part of what made learning of the resignation so emotional for the team. Players found out about Stahlhuth’s resignation days before the University announced the decision on July 9. There were few indications that Stahlhuth was planning on leaving the Bears before this summer, so most players were surprised when they got the news.

Sophomore Sophia Huynh was walking her dog when Stahlhuth called her with the news. “I just blanked out,” Huynh said. She had to ask Stahlhuth again where her new job would be, because she had not been able to process it the first time. “We were all just so shocked that we didn’t hear anything after what she said,” Huynh said.

When Stahlhuth called Persky, she had emphasized how she would still be a resource for the team after the resignation, but Persky was still in disbelief. “It felt like losing someone really close to you,” she said.

The resignation weighed on Stahlhuth as well. “I told my players that Monday evening that that day of conversations ranked in the top 10 hardest, saddest days of my life,” she told Student Life in an email.

The departure left the Bears without any direct adult leadership. Assistant coach Erin Swaller had moved to Washington D.C. earlier in the summer, and Stahlhuth’s resignation meant that her husband Bruce, who often helped out with the team, would no longer be involved.

It took a few days for the shock to wear off, but Persky soon found herself more able to talk openly about the resignation. As she talked it over with past and present teammates and her family, her sadness slowly dissipated, morphing into optimism. “Especially as captains, we felt like we had a responsibility to address it amongst the team, and then it kind of grew into [a mindset of] ‘This can be good. We don’t know who the coach is going to be. It could be awesome. It could be great,” Persky said.

The players’ combination of sadness and optimism allowed the captains to lead the team through a tough few days. “It was really good to have the captains just there, because none of us saw it coming,” junior Divya Sharma said. “It was just completely out of the blue. I just kind of leaned on other teammates.”

In a meeting of the three captains soon after the resignation, Wanger suggested scheduling a meeting with the Athletic Department to determine next steps for finding a new head coach. The trio met with three department administrators, who told them players could be involved in the second round of interviews. Wanger felt pleasantly surprised by the University’s willingness to include players in the search process. “We didn’t know to what extent we would be included, so we feel like our voices will be heard,” she said in July.

Wash. U. was in the midst of a pandemic-induced hiring freeze at the time of Stahlhuth’s resignation, but the Athletic Department reassured the players that they would still be able to hire a coach in the near future. Head coaching positions are considered essential positions, so the department was able to move forward with the search before the school year began. “They told us that they understand the necessity for us to have somebody to ask our questions to and [for] stability,” Wanger said.

The search process has continued to impress players since those initial conversations between the captains and the Athletic Department. The team got to lead its own 45-minute interview session for each of four candidates who made it to the second round. “I don’t know how much my opinion was taken into account, I guess I just appreciated that my voice was heard at the table,” Persky said. “That was cool for me, just feeling like I have an impact on the future program after I graduate.”

Throughout the search, the players’ time with Stahlhuth has informed the questions the Bears consider. Huynh said she was on the lookout for a coach who could mirror Stahlhuth’s ability as a motivator, someone who could make practices fun while pushing them to improve. Wanger emphasized the need for someone who could emulate Stahluth’s understanding of the unique position Wash. U. student athletes find themselves in. A focus on tennis was crucial, Wanger said, but she noted that it was also important to her that the new coach understands the need for balance between athletics and academics.

Sass focused on how a new coach should, like Stahlhuth, go beyond the traditional duties associated with leading a team. “One of the big things was that kind of above and beyond support, where somebody who is applying to a job as a tennis coach might not know that that’s part of the job application,” she said. “But I think that’s really what made the experience for me, so I think that’s definitely an aspect of what we’re looking for in the next coach.”