Athlete of the week: DeVaughn Rucker has saved his best for last

DeVaughn Rucker has saved his best for last. In his senior season, the forward has averaged more than 12 points per game while shooting a career-best 52% from the field. I sat down with DeVaughn to learn more about his time at Washington University and his expectations for the upcoming NCAA tournament. 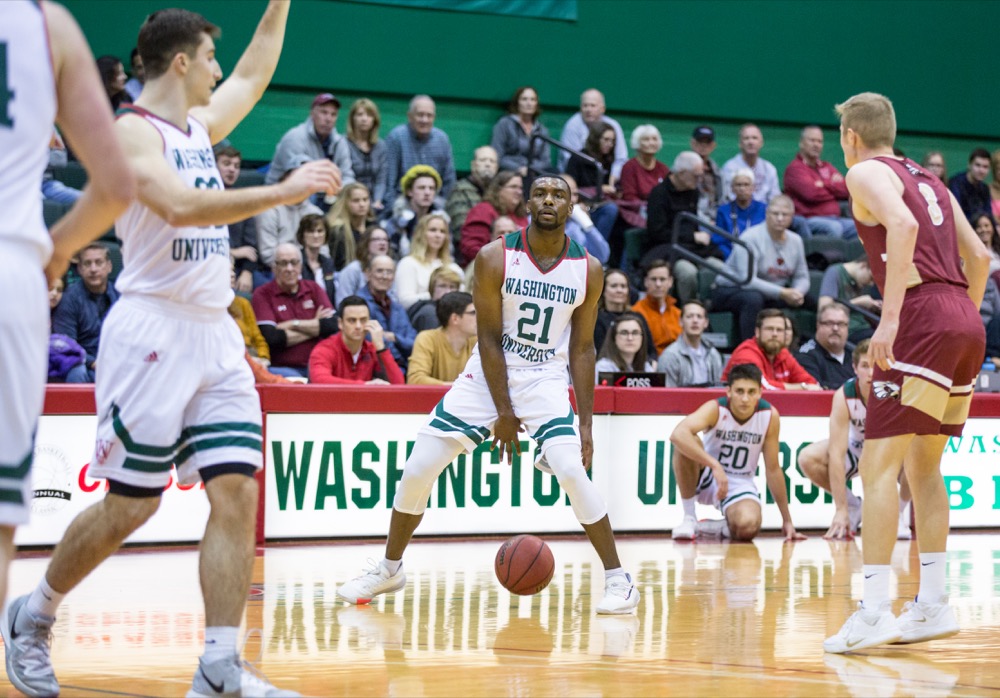 Senior forward DeVaughn Rucker dribbles between his legs. Prolific in the paint, he has averaged 12 points per game this season.

Student Life: Today was the NCAA Tournament selection show. It must’ve been pretty exciting to finally get a bid.

DeVaughn Rucker: Yeah, so the selection show was at 11:30. It was pretty nerve-wracking, because a lot of the teams that were ranked lower than us were getting in. But towards the end, they picked us and it was pretty cool. I think we’re playing Bethany [Lutheran College], and they have a pretty good record like most of the teams in it, so it’ll be pretty fun.

SL: Does the team have high expectations for the tournament?

DR: I think the tournament’s always fun. Everyone’s restarting. Preparation is something that’s so important since [in the tournament] we play on Friday and Saturdays. In the [University Athletic Association] we play Fridays and Sundays, so you get that day of rest, but back to back—that’s killer. I would say we definitely need to keep the same laser focus that we’ve had from the beginning. Our team has evolved in a positive way. A lot of players have stepped up and we realize how much talent we have. The thing that we worked on all year is just learning how to play with each other, because we run a motion offense. It’s all this buildup to where we are now. And I feel certain that we can keep that same focus. The tournament is the be-all, end-all for winning, and I would say that any team has kind of an infinite roof in terms of where their possibilities can be.

SL: You had a tough loss last week on the road against University of Chicago. Does that help the team moving forward into win-or-go-home games?

DR: The offensive part is definitely always variable. But the defense—that’s something that we like to hold constant. And that was really the root of our problems. Offensively, they weren’t doing anything different that really worried us. Chicago can get us on those hot streaks. It’s similar to a lot of the teams we might see in this tournament, and if anything, it was a wake up call, in terms of where we are now, because it’s a clean slate, everything’s new. And so if anything, it was just a good learning experience.

SL: Let’s rewind for a minute. I’m curious as to how you wound up at Wash. U.

DR: I think the first thing that came to my mind when I was in high school was like, “Okay, get into a good school.” Basketball [was] definitely important, but I would say that the academic piece was more of a priority. A while back, I was working out for a couple of schools, and Wash. U. showed up. And I was like, “Okay, I don’t know who they are.” And so after work, I look them up, and it turns out Wash. U. is one of the top schools in the nation. So that was something that you couldn’t beat. The sports are something that draws you in, and I live around 30 minutes away from Wash. U. So, yeah, it’s pretty nice.

SL: You’re a senior now, and you’ll be graduating this May. Do you have a favorite memory, either on or off the court?

DR: Yeah, yeah. I would say my favorite memory was during our pre-season workout. They were hyping it up, saying stuff like, “Oh, it’s gonna be the toughest running yet.” We all got there and started looking around scared and nervous. Coach blows the whistle, and we start running. Really? Okay, okay. We finish and he tells us to take a rest. And then we look over, and assistant coach [Stephen] Wilcutt is in a wig. And he runs in with a bunch of rubber balls and we just started playing dodgeball. That’s probably like the most fun I’ve had. Willy is a legend. It’s a really good group of guys. I honestly love hanging out with everyone. Even off the court, we spend so much time together, so being away is definitely going to be a change. It’s like being in the real world, honestly. And it’s something that you could theoretically mourn, or instead just enjoy and just let it be. And I choose to do the latter.

SL: Do you have plans yet for what you’ll be doing after you graduate?

DR: I plan to get a postgraduate degree and also play overseas—either in the UK or Spain depending on how it shakes out. But yeah, just going through that process right now. I’ve been talking with [the women’s basketball class of 2019’s] Madeline Homoly, because she’s doing the same thing. I was also talking to one of my friends and he knows someone who is doing the same thing. The biggest thing is just talking to people about it. And then obviously, demonstrating that you have the skill to do it is something that I feel I’ve solidified. And so the hardest part is over, honestly. The next hardest part is not thinking about that, and really focusing in on what we have to do this upcoming Friday.

SL: It seems like this year has really been a breakout one for you statistically, especially in terms of shooting. You’re making nearly 10% more of your shots from the field, as well as 38% of your threes. Have you made any changes to your game that have allowed you to put up such efficient numbers?

DR: I would say that over the last three years that I focused more so on the physical side of the game. Training is definitely important. Getting on the court and getting shots up and lifting weights, eating right—those are things that I think that I’ve got a good grasp on. But I realized over the summer that for every hour you hit the gym, you also need to do the same mental preparation, because your mind is a muscle as well. Whether it’s reading different books, meditating, watching film or just talking it out with your teammates—and camaraderie, that’s something really important that goes unnoticed by a lot of people.

SL: Who’s your favorite NBA player? Do you try to model your game after him?

DR: Two people really come to mind, probably because they just played each other. LeBron is one, and Bradley Beal is the other, though not necessarily because of his shooting ability. I don’t shoot the ball as much as him because honestly, I don’t need to at this level. But just having that same mentality of knowing what you can do but still getting your teammates involved. It’s a different level of play that people don’t really appreciate in basketball. Doing what others don’t want to—that’s something I really respect about those two. Sometimes it’s boring to watch, but that’s what it takes to be a champion.

SL: How has your role as a leader for the team changed as you’ve gotten older? How has it been getting to know the new freshmen?

DR: During the beginning of the year, we were coming back from internships. I was like, “Dang that was a taste of what it was really going to be like,” and then here come these 18-year-olds that don’t have nearly as much experience as you—just in terms of what you’ve done during your time here. And at first I was thinking “Who are these kids?” But then, once you start messing with them, you realize that you have a lot in common. It just becomes like a natural conversation like, “Yo, what did you do today?”

SL: Do you have any advice that you would give to the next year’s incoming freshman basketball class?

DR: I really didn’t play the first two years. There’s a lot of adversity that I faced. And there’s a lot of times where you think that quitting is the option. But if you really want something, then it’s not—that’s just not a choice, honestly. And so you have to go through each of those emotions and each of those events knowing that you have this vision of what you want to do. So stay the course.

This interview has been slightly edited for length and clarity.