Reinmiller is priming the Bears for a playoff run, both as a player and as a coach

The Washington University men’s and women’s basketball teams finish their respective regular seasons with afternoon matchups against the University of Chicago on Saturday. The No. 13 men come into the weekend in sole possession of first place in the University Athletic Association. With a victory over the Maroons (6-7), the Bears (11-2) would win the conference outright and get an automatic bid to the NCAA tournament. For the women, the stakes are not as high. After an historic loss to New York University Sunday, the Bears (7-6) are all but guaranteed to miss the playoffs. Ahead of the finish to the regular season, staff reporter Miguel Campos profiled a senior from each basketball team.

The Washington University men’s basketball team’s senior forward Louis Reinmiller is a proven leader, whose unfortunate circumstances were used in the most constructive way possible to make him the role model that he is to the team today.

Reinmiller did not enter his collegiate basketball career as a Wash. U. Bear. He was instead recruited by the University of Central Missouri, where he played his first two years as a college student. Reinmiller played a total of 13 games while also making the Mid-Continent Athletic Association Academic Honor Roll twice. Despite his academic success at Central Missouri, however, Reinmiller, a Kansas City native, was looking for a change in scenery. 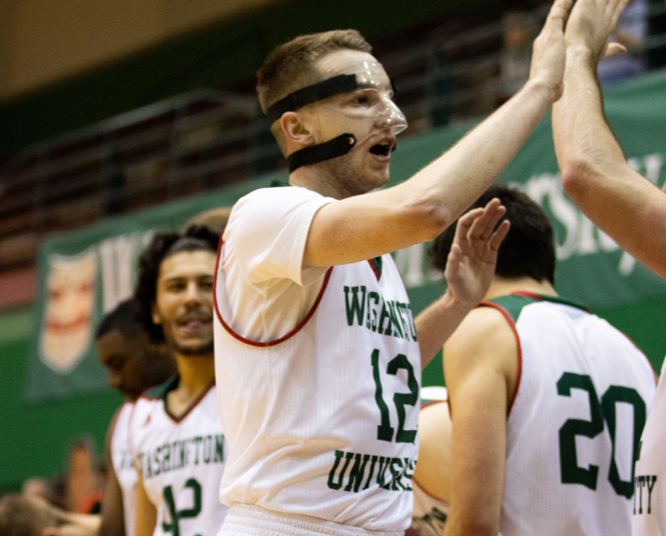 “I was looking for somewhere that had even more of an academic experience that would lead to better things after graduation, and knowing that Wash. U. was in St. Louis and how good of a school it was, I decided to try and transfer here,” Reinmiller said.

And transfer he did. For the past three years, Reinmiller has been studying finance and economic strategy in the Olin School of Business. “It’s been a great experience so far and it’s kind of been my journey,” Reinmiller said.

On the basketball side of things, Reinmiller noticed some subtle yet key differences right off the bat in his transition from a Division II to a Division III school.

On top of dealing with the changes that he noticed after he transitioned schools, Reinmiller had trouble with injuries, that kept him from doing what he loved the most.

“It’s really sad, because he was just getting himself into a position where he was comfortable contributing to the team on the floor,” Mark Edwards, the men’s basketball head coach from 1981-2018, said.

During Reinmiller’s junior year here, he broke his hand. That is when his coaching and leadership abilities truly came into fruition.

“One thing I noticed right away a year ago is that he’s got a great feel for the game. He’s a really high IQ player, really understands how we want to play,” head coach Pat Juckem said. “When he was out last year and while he’s been out this year, we just made him into an assistant coach.”

The coaches are not the only ones who immediately took notice of how Reinmiller took his injury in strides and used it to instead take advantage of the other basketball skills he had.

“I’d say even during that time out, when he physically couldn’t have a presence on the floor, it’s that leadership aspect that really blossomed,” senior forward DeVaughn Rucker said. “He really became a guy that was very involved in our pregame and halftime speeches.”

This shift in focus to that of a leader was further exemplified when he broke his nose earlier this season, once again not letting that stop him from making his own impact.

Reinmiller is someone who is tough on his teammates, whether he is out there on the floor or not, always keeping them accountable and making sure they do the most they can to increase their effectiveness both on and off the court.

His time as a coach has allowed him to become even more of a leader. “It kept me fully engaged on the team and I was able to contribute and add value even when I wasn’t playing,” Reinmiller said. “That’s huge to me because that’s really all I want to do is add value in any way that I can.”

The injuries allowed Reinmiller the chance to notice and comment on the smaller details regarding the team’s gameplay, that he most likely wouldn’t have noticed if he was playing on the court with the rest of his team.

“A lot of those things end up being the little stuff―This guy doesn’t box out quite as much or his form on this particular screen or when he’s rebounding can be tweaked a little bit,” Reinmiller said. “Also just strategy-wise, I kind of got to learn exactly what the coaches are thinking all the time. When you get to participate with them every single day on stuff like that, you kind of get to see the full picture.”

With Reinmiller graduating at the end of the year, there are several things that his closest teammates and coaches want the younger players to remember about how Reinmiller carries himself on the team.

“Establish a value to why you’re on that team,” Edwards said on the mentality all future Bears should have based on the example set by Reinmiller. “Are you on the team for your personal gain, or for the overall betterment of the team?”

“I would definitely say dedication―just doing 100% everyday just to help someone else and help the whole team get better―is the most forefront characteristic that says ‘This is Louis,’” Rucker said.

“Selfless,” is what Juckem said immediately when asked for a word that best personifies Reinmiller. “For years, as long as I’m here, we will utilize his approach as an example on how to do it―his impact, if you ask any one of our players―guys see that he’s a great example of just being selfless, being all in, and being a really great teammate.”