With three games left in the regular season, the Washington University men’s basketball team set out to take care of business against Brandeis University and New York University. Wash. U. entered the weekend tied for first place in the University Athletic Association with Emory University, but the Eagles held the tiebreaker after sweeping the season series between the two teams. Itz would take Wash. U. winning all of their contests and Emory losing at least one of their games for the standings to shift in Wash. U.’s favor. 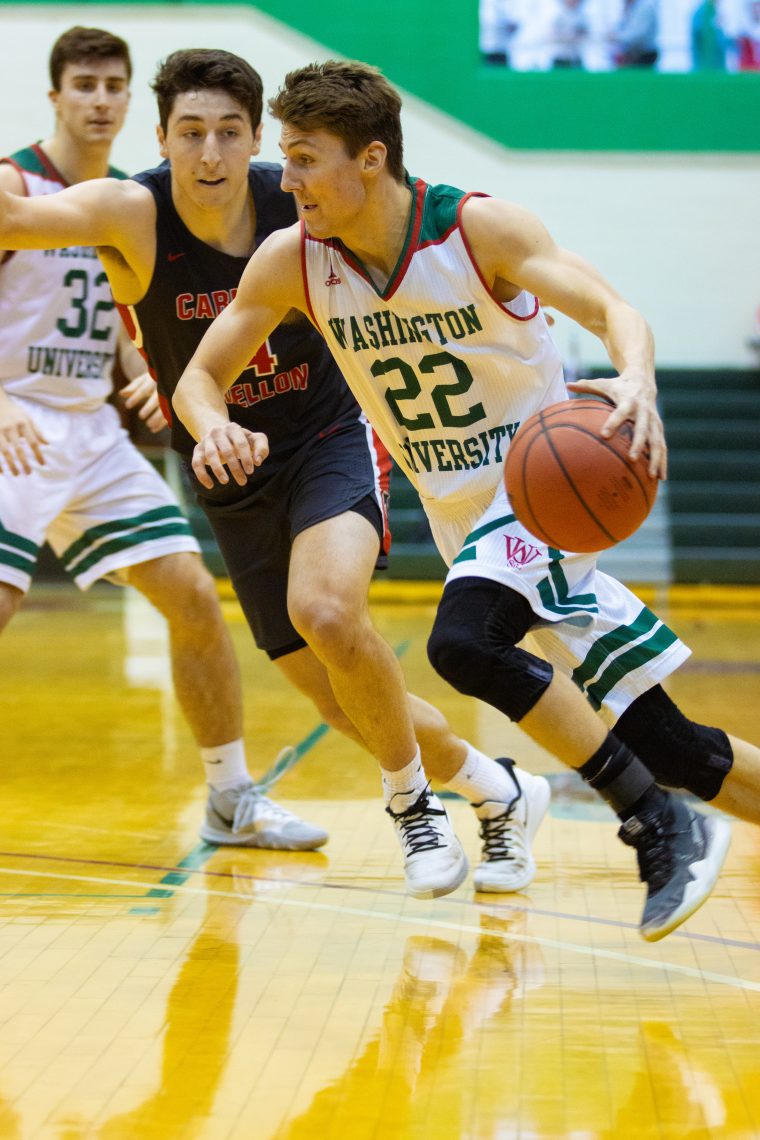 That is exactly what happened, as the Bears won both their games and Emory fell to Case Western Reserve University. With the wins and the Emory loss, the Bears advanced to 10-2 in the UAA (and 20-4 overall), taking sole possession of first place in the conference with a single game remaining.

Friday night in Waltham, Mass., the Red and Green faced off against the Brandeis University Judges, who came into the night 7-4 in UAA play.

Following the opening tipoff, Wash. U. grabbed onto a narrow lead and managed to keep it for a good portion of the first half. The tides shifted slightly, however, when a flurry of Brandeis three pointers gave them the slight advantage as the teams headed to the locker rooms with a score of 38-34 in favor of the Judges.

Wash. U. senior DeVaughn Rucker came out of the break with the hot hand, scoring his team’s first seven points to start the second half and keep the Bears within range. Rucker went on to finish with a game-high 25 points, with 17 of those coming in the second half.

Despite Rucker’s offensive outburst, Brandeis stayed on top for the first seven minutes of the second half until a three-point shot from junior guard Payden Webb put the Bears up by one, 49-48. Webb ended his night going 4-6 from beyond the arc and contributing 14 points off the bench.

From that point on, Wash. U. slowly distanced themselves from the Judges, gaining as much as a 12-point lead down the stretch with just over three to go. The Judges did a good job at making it interesting, but after letting their opponent get a bit too close for comfort late in the game, the Bears snuffed out any chance at a comeback and won the game, 77-70. Junior guard Jack Nolan scored 24 points.

Next up on Wash. U.’s radar was New York University, a team that had had a rough go at things this season, touting a 1-11 record in UAA coming into Sunday’s game.

The Violets came out swinging with a quick 8-2 run to start off the game. Their lead increased to a score of 16-7, forcing Wash. U. head coach Pat Juckem to call a 30-second timeout.

The Bears then found the spark that they very much needed. They soon went on a run that put them within striking distance. With under three minutes to go before the intermission, a pair of free throws by senior guard Matt Nester put the Red and Green up by one. Halftime saw both teams squared up at 36 points a piece.

Coming out of the half, Rucker once again powered the Wash. U. offense. He started what would eventually become a 22-11 run that separated both teams within the first half of the second block of play. From that point on, it was smooth sailing for Wash. U., who won the game, 82-62.

The Bears shot lights out all game long, shooting 50.8% from the field (56.7% in the second half) compared to New York University’s 42.1%. Rucker polished off an excellent weekend with a double-double performance of 20 points and 10 rebounds, while senior guard Jonathan Arenas got close to getting one himself with nine points and nine rebounds, along with three steals. Nolan and sophomore forward Justin Hardy both contributed 13 points.

With one game left, the Bears control their destiny in the UAA. A win in the season finale Saturday against the University of Chicago would clinch sole possession of the conference for them, as well as the UAA’s automatic bid to the NCAA tournament. If Wash. U. loses and Emory wins against the University of Rochester, Emory will receive the automatic bid based on the tie-break, but the Bears have already clinched at least a share of their 16th UAA title and their third in four years.

“We will treat the game against Chicago the same as we have treated every game throughout the year,” Nolan said. “We need to get better as a team in practice this week, and we will continue to prepare with urgency… just as we have done all year.”

The final game of the regular season is Saturday at 3 p.m. in Chicago.