J.J. Kroot is a senior on the Washington University men’s tennis team from Indianapolis, Ind. This weekend, he, alongside fellow captain senior Bernardo Neves, will lead the Bears against Brandeis University and the winner of the match between Emory University and Gustavus Adolphus College at the Indoor National Championship in Minnesota. If they win their first two matches, the Bears will play for the national championship on Sunday. Ahead of their trip to Minnesota, I sat down with Kroot to talk about preparing for Nationals and how he spends his scarce free time. 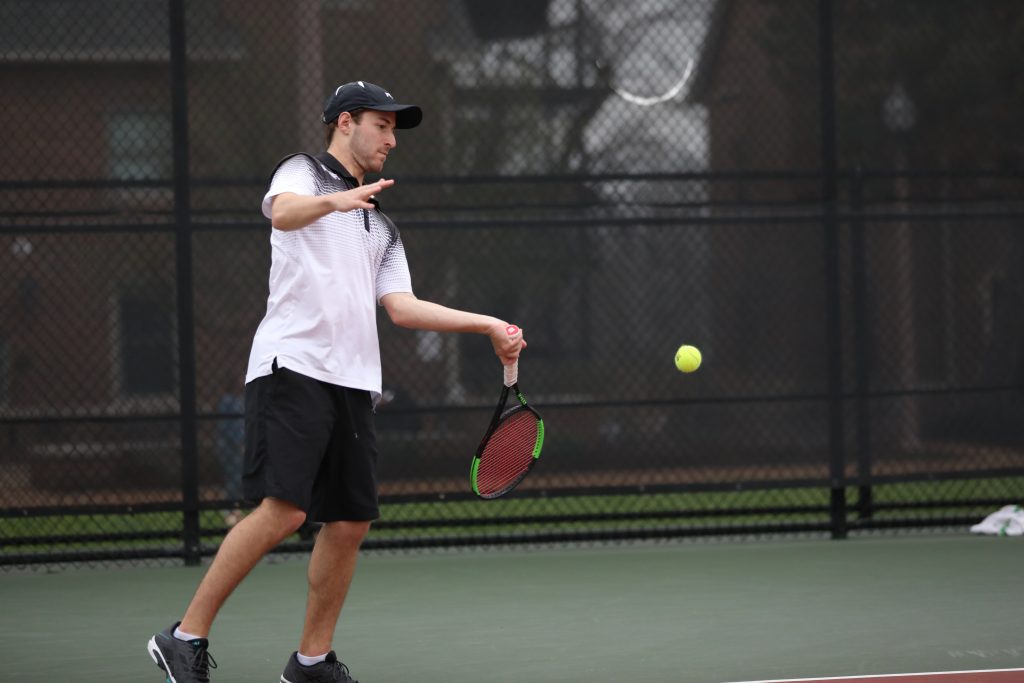 Student Life: How often do you get home?

J. J. Kroot: During the fall, like not during tennis season, I try to go a decent amount, like for Fall Break [and] Thanksgiving Break. But during the spring semester, I can’t go at all, unless we’re lucky to have like a match there. Then we might stop by my parents house. But other than that, it’s usually the whole semester.

SL: What brought you to St. Louis from Indianapolis?

JK: I hadn’t really known much about Wash. U. My brother looked at it a little. He played basketball for Williams [College]. So I kind of knew a little about [Division III]. And I knew I wanted to look at it, and a good friend of mine from Carmel, Indiana came to Wash. U. to play tennis. And of got on me to look at the school and come visit, and then once I visited and I was hooked. Feel like that happens to a lot of people here.

JK: Radha Vishnubhotla. He graduated last year. He was on my rival high school tennis team, but he was always one of my good friends. He’s definitely the one who got me to look here.

JK: Yeah, he got the height. I did not, unfortunately. Basketball used to be my sport. I still love playing. It’s one of my biggest passions, but I wasn’t blessed with the body type for it. So I got into tennis when I was like 11 or 12. And I was naturally pretty decent. I started playing more and then picked up competitive tennis and, from there, I stopped playing basketball.

SL: When did you stop?

SL: So you weren’t holding out for that last minute growth spurt?

JK: I mean, I was trying to, but time was running out. I had to pick a sport basically. And tennis was definitely a brighter future.

SL: How tall is your brother?

SL: Well, it’s working out for you now.

SL: Do you prefer singles or doubles?

JK: I’ve always liked doubles better. I think it’s more fun because you have a partner and you win or lose with someone else rather than by yourself and you have someone to talk to. It’s also usually more…not intense, but enthusiastic. Singles is more calm because it’s a longer match. Doubles is a really quick match and you have to come out to a hot start and I like that, but singles is also fun.

SL: How does the strategy and play style differ between doubles and singles?

JK: Doubles is very focused on who can get closest to the net and finish the points there. So usually most good teams will just serve and then run straight to the net and volley and try to end points within a few shots, whereas singles is more like grind[ing] out points that last 10 to 20 shots. A lot of it is about fitness, whereas doubles is more just aggressiveness.

SL: Did you prefer doubles when you arrived at Wash. U.?

JK: I always liked doubles more just because I thought it was more fun. But tennis is a weird sport because growing up in tournaments and stuff, when you play, it’s all individual. There’s no teams, whereas most other sports, you’re on a team. You kind of just grow up playing for yourself, which I did not like at all. That’s why I love high school tennis and college tennis because you actually have a team to play for. When it comes to singles versus doubles, when you’re playing for a team, they’re both awesome, because you have something to play for other than yourself.

SL: Are doubles something you emphasize as a team?

JK: Definitely. We start every match with doubles. If you get off to a 3-0 start, that’s a huge advantage. You’re likely to win the match. If you get down 3-0, you could be screwed. It’s really important to try to get a doubles lead going into singles. It just sets the tone.

SL: You mentioned that you enjoy the team aspect of tennis. What’s the vibe on a tennis team like?

JK: It’s really goofy, I would say. We mess around a lot. When it comes to our matches and practice, it’s all business of course, but outside of the court, we’re just always joking around, messing around with each other. I think ever since I’ve been here, it’s just been a really close team. Our coach emphasizes that a lot, [head] coach [Roger] Follmer. I will credit him with that culture. Even when I visited, that was one of the main reasons I decided to come here. I could tell the team was really close and fun to be around. That’s a big draw. Even when freshmen come in and they might not fit in perfectly, the team is very inclusive and everyone becomes really good friends because there’s only 13 people on our team. It’s really easy to get to know everybody and become close pretty quick.

SL: When does the team bond and get closer? What will you remember about your time hanging out with the team?

JK: We do a lot of team dinners. At least a couple times a week, we have team dinners [where] whoever can go will go. That’s just kind of where we unwind, talk about the day. We try to talk about stuff other than tennis, because our lives revolve around it during the spring, so it’s nice to have a break from it and talk about other life stuff. Also, we have 6 a.m. practice like three or four times a week.

JK: When I look back in like 20 years, I’ll remember those. They suck. It’s a struggle, but it definitely brings the team closer, because everyone’s struggling together.

SL: Do you play tennis at all in your free time?

JK: That’s a hard question because now, in college, I don’t really have free time other than practice. I don’t really play other than our team practices, but if someone wants to play, I will. I enjoy it, but I’d honestly in my free time rather do something else like basketball or golf. Throw around football or something. Just for something different.

SL: What would you say your biggest hobby outside of tennis is?

JK: I like watching sports. Any sports, following sports, watching them. I love watching movies, TV shows. I’d say a lot of athletes are always tired a lot just from constant grind. So I spend a lot of time like before bed watching movies or TV shows. Relax, fall asleep.

SL: I forgot you were from Indiana.

JK: I like the Spurs too, because I used to love Tim Duncan and [Manu] Ginóbili. I love Gregg Popovich.

SL: Being from Indiana, being a basketball fan and appreciating solid fundamental basketball is very on brand.

JK: I thought it was gonna be Game of Thrones, but the ending was…not great. So I’ll say Breaking Bad. I just think Walter White’s like an all time classic character. And favorite movie is definitely Dark Knight.

SL: Those are solid answers.

JK: What about you?

SL: Well, this could sound real sappy but I love The Iron Giant.

JK: That movie’s sick. It’s so good. Have you seen Moana?

JK: I watched that last night. I love Disney movies. I don’t know how you don’t. When I have free time, I try to watch all the Disney movies that I didn’t watch growing up as a kid to try to see if they’re still up to par.

SL: I need to watch Inside Out.

SL: Last question for you: Indoor Nationals are this weekend. How does the intensity of nationals differ from any other tournament you play in during the season?

JK: We always look at the schedule with three major points of emphasis: Indoor Nationals this weekend, our conference tournament in April and then the national [NCAA] Championship tournament if we’re lucky enough to make it. We use them as building blocks. We want to play our best tennis and peak during those moments. We try to keep 100% focus and intensity for every match, but there’s just a different level of these ones. There’s a lot at stake for all the teams there and every match is going to be really hard to win.