Matt’s Musings: February sucks…but hey, at least the Champions League is back

It’s February right now, which means a few things. It’s still winter, and we’ve got another month to go until it’s officially over, even though Punxsutawney Phil promised an early spring because he didn’t see his shadow (another wonderful February tradition), but for whatever reason it’s still freaking cold and gloomy and what’s up with that, Phil?

February also brings about everyone’s least favorite holiday unless you’re within the first few months of dating someone: Valentine’s Day. Something’s in the air, but it ain’t love. I think those people down the hall are burning incense. People in committed relationships and marriages feel pressure to do something special and romantic while single people sit on their beds and cope with their depression by reading other single people’s tweets and listening to “Marvins Room.”

So, February is the worst and we should all lose faith in our romantic lives and Phil’s knowledge of meteorology, right? Yes, but there is one good thing to come out of February. Something we have all been waiting a long time for. Is it a good night’s sleep? The Iowa caucus results? The actual Iowa caucus results? No, February means the return of…

The Champions League (UCL), the greatest sports competition in the world (fight me), returns on Tuesday after a 10-week break. For those not well-versed in European soccer, the UCL pits the top European clubs against each other. Teams from England, Spain, Italy, Germany, France and more go up against one another on Tuesdays and Wednesdays throughout the season. Next Tuesday, the knockout stage begins. There are 16 teams left in the competition, narrowed down from 32 in the group stage and 79 in total (a lot of teams participate in qualifying, but the competition really begins in the group stage). In the knockout stage, clubs play two-legged, home-and-home ties. The leader on aggregate—total goals scored—advances to the next round. If the two teams are tied after both games, the leader on away goals scored goes on. If they are tied on away goals, they go to extra time. If the tie is still not broken, the winner is decided on penalty kicks.

There are some sumptuous matchups in the round of 16 this year, and I’m going to go through some of them, make my predictions and speculate on the rest of the tournament. Sound fun? No? Well, you’ve made it this far. May as well finish the article. 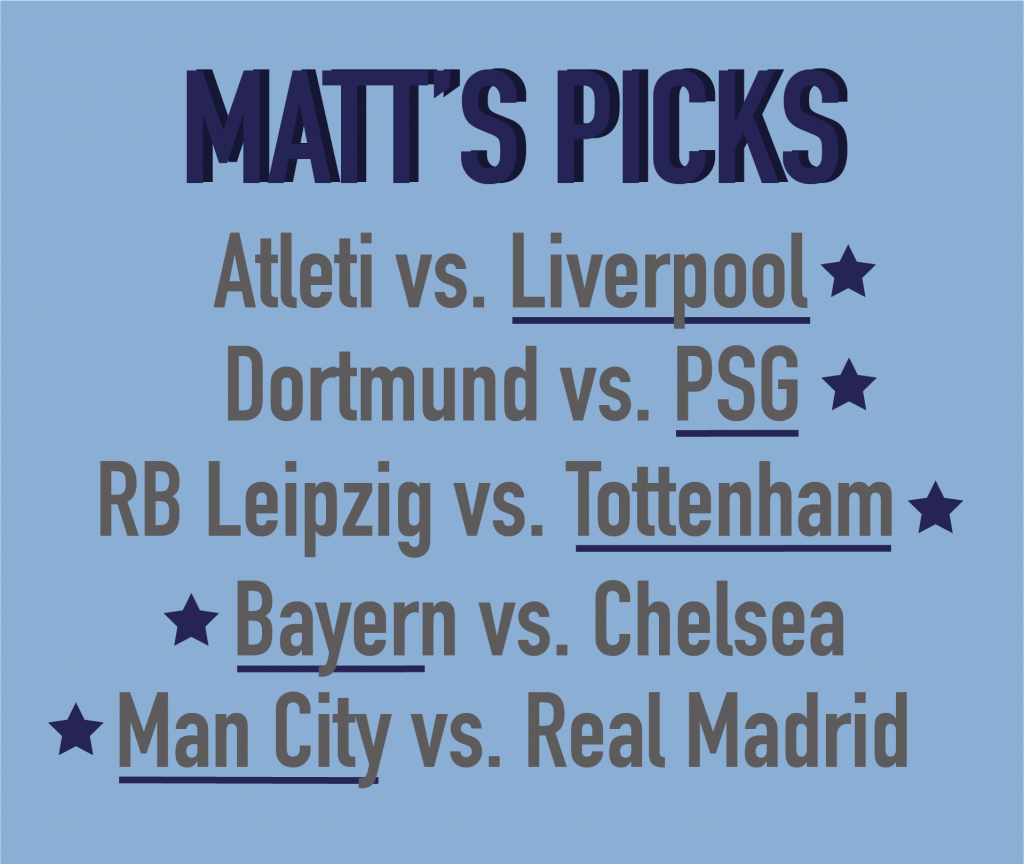 No one in European football team is hotter than defending champions Liverpool F.C. They’re 22 points clear in the Premier League and haven’t lost a league game since January 2019. They did struggle a bit in the group stage of the UCL, losing to Napoli early on, but they ended up winning the group. Atleti and Diego Simeone are always a threat in Europe, but they haven’t looked as strong as they’ve been in recent years. Liverpool should advance.

This could be an absolute cracker of a tie with arguably the two best young players in the world, Dortmund’s Erling Haaland and PSG’s Kylian Mbappé, going head to head. Mbappé is already one the five best players in the world at just 21 years old. Meanwhile, Haaland burst onto the scene this season at Red Bull Salzburg before joining Dortmund in the winter transfer window. This tie will feature goals aplenty, but Dortmund’s inability to defend will doom them in the end. PSG will win a knockout tie for the first time since Neymar’s arrival in 2017.

While not the flashiest matchup, this might be the most unpredictable tie. Leipzig were first in the Bundesliga just a couple weeks ago, and still sit just a point off the top. However, they are winless in their last four games. Tottenham started the new year by going winless in their first three games before reeling off a six-game run without a loss. That includes a 2-0 victory over Man City where they registered a whopping two shots on target. Harry Kane remains injured while Christian Eriksen has left for Inter, but I have a feeling newly bald José Mourinho and his merry men will come out on top in this tie.

At times this season, Chelsea have looked like a team capable of pulling magic from nothing, such as the game in Amsterdam against Ajax. However, they’ve also looked completely lost, and recently, the latter seems to be more common. They’ve struggled for consistency in the league since November and have had no creative spark in Christian Pulisic’s absence since New Year’s Day. He should hopefully be back this weekend against Man United (knock on wood), but he can’t be the only source of creativity on that side. Bayern, on the other hand, haven’t lost since Dec. 7. They retook the Bundesliga lead a couple of weeks ago, and Robert Lewandowski has been arguably the best player in Europe this season. I love my Blues, and my heart desperately wants to pick them, but my head’s winning out this time. Bayern advance.

This is undoubtedly the crown jewel of round of 16 ties. The two-time defending Premier League champions against 13-time European champions Real Madrid. After starting the season slowly, Real have come alive over the last couple months and now sit alone atop La Liga. Besides a recent slip-up against Real Sociedad in the Copa del Rey, Real haven’t lost since October. Karim Benzema and Sergio Ramos seem to be back to their best, and Federico Valverde has been a revelation in midfield. City have been hot and cold this year, at times looking like their dominant selves. However, they’re also a distant second in the Premier League. The Champions League is their main focus at this point, and that could be for the best. Kevin De Bruyne has been electric this year, leading the league in assists by a wide margin. With him in form and orchestrating the attack, City always has a chance. It’s going to be tight, but City will move on.

I also think that Barcelona, Juventus, and Atalanta will move in their ties. After the round of 16, a draw will determine the bracket for the quarterfinals and beyond, so we don’t know who will be playing who yet. However, it’s hard to bet against Liverpool right now. No one in Europe has been more dominant than the Reds. If anyone could potentially stop them, it’s likely to be Man City or Bayern. But right now, I can’t pick against Liverpool.