Out of the blocks, track and field is off to a hot start

The Washington University men’s track and field team finished first at the I-55 Triangular against Illinois Wesleyan University (IWU) and the University of Chicago on Saturday, while the women were bested by Chicago and came second. 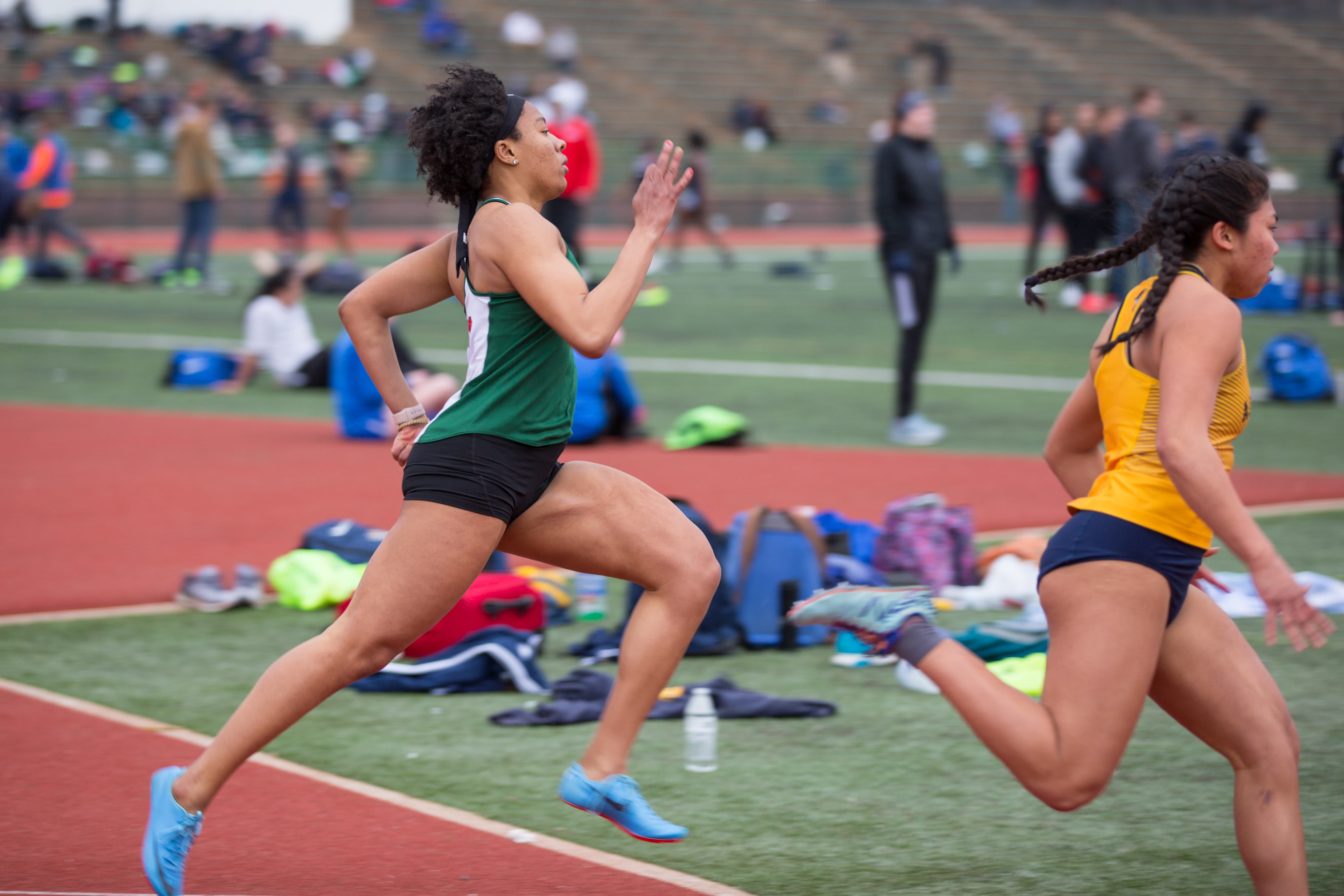 Junior Caira Watson Haynes rounds the bend onto the homestretch during a 200m heat last spring. Watson Haynes ran the 60m hurdles in 8.80 seconds on Saturday, a mark that tops Division III.

The women’s team won four events. Junior Caira Watson-Haynes won the 60m hurdles and the 60m. Junior Zarya de Souza won the 3000m. Freshman Laura Buchieri won the high jump. Watson-Haynes 60m hurdles time of 8.80 is the fastest in Division III so far this year, while her 60m time of 7.88m is the 12th fastest. In Division III, the top 17 performers in an event over the course of a season are invited to the National Championships. Based on previous qualifying times, she appears to be a lock to qualify for nationals in the hurdles, but she is on the cusp in the 60m.

In addition to providing an opportunity to qualify for nationals, tournaments like the I-55 Triangular allow competitors like Watson-Haynes a chance to develop the mindset they will need to succeed at the national championships.

“It gives me the confidence to perform well later in the season,” Watson-Haynes said. “Knowing that if could do well at these early meets—where there may not be as much competition and I’m really running with myself—if I can get to that early in the season with nothing on the line in terms of a trophy or a team title, then I know I can do even better when there’s something on the line.”

The I-55 Triangular is an annual meet between the IWU Titans, Chicago’s Maroons and the Bears. Illinois Wesleyan is centrally located between Chicago and St. Louis, which is a perfect location for the meet. It is as close to a friendly competition as extremely competitive athletes can get.

“There’s a traveling trophy that goes with it that adds just a little extra fun,” Matteucci said. “The truth of the matter is it’s not like the most highly coveted thing in the world. We want to win it, of course. But it’s not like we’re going to go all out to get it. We’re going to make smart training choices. If someone shouldn’t be racing that weekend, or they had a meet the week before and they need more time to recover, or they just training-wise need to go to a different event. Training-wise, we’re not trying to always optimize and get the most points. But at the same time, if we’re competing, we want to try to win and try the best we can to take that trophy home. It adds an extra little fun flair to the meet.”

The event that Matteucci won—the 1200m—is one that is not typically ran at Division III meets. It sits at an awkward distance between the 800m and the mile. Matteucci usually runs the mile. By running the 1200m, he can work on a skillset that he typically is unable to.

“It’s a good training opportunity and it allows us to work at this distance that we wouldn’t normally work at,” Matteucci said. “It kind of gives you an interesting ability to go a little faster. Getting an in-between event can be very beneficial because it allows you to work on something that you might not normally get a chance to work at. From a training perspective, it’s a great opportunity.”

In the grand scheme of things, it is hard to tell how important the I-55 Triangular will be for the team. However, they appear to be on track to have an excellent season. Multiple members of the track team set lifetime personal records, an impressive feat, especially this early in the season.

“It was a very exciting meet,” Wagner said. “A lot of very cool things happened. I think everyone right now is just in a really good place. For me specifically, I’ve never run 400m this early in the season. It’s hard to know exactly where I’m at, but it’s fun to compete. My teammate was right behind me during that race. It’s exciting to have competition within the team.”