The script of the second game the Washington University men’s basketball team played this weekend was a complete flip of the first. In the first game, the Bears led No. 24 Brandeis University by as much as 16 in the first half en route to victory. But in the second game, the Bears trailed by as much as 16 to the Violets of New York University. But in both games, the result was the same: Wash. U. defeated a conference foe to extend their winning streak and inch closer to winning the University Athletic Association title. 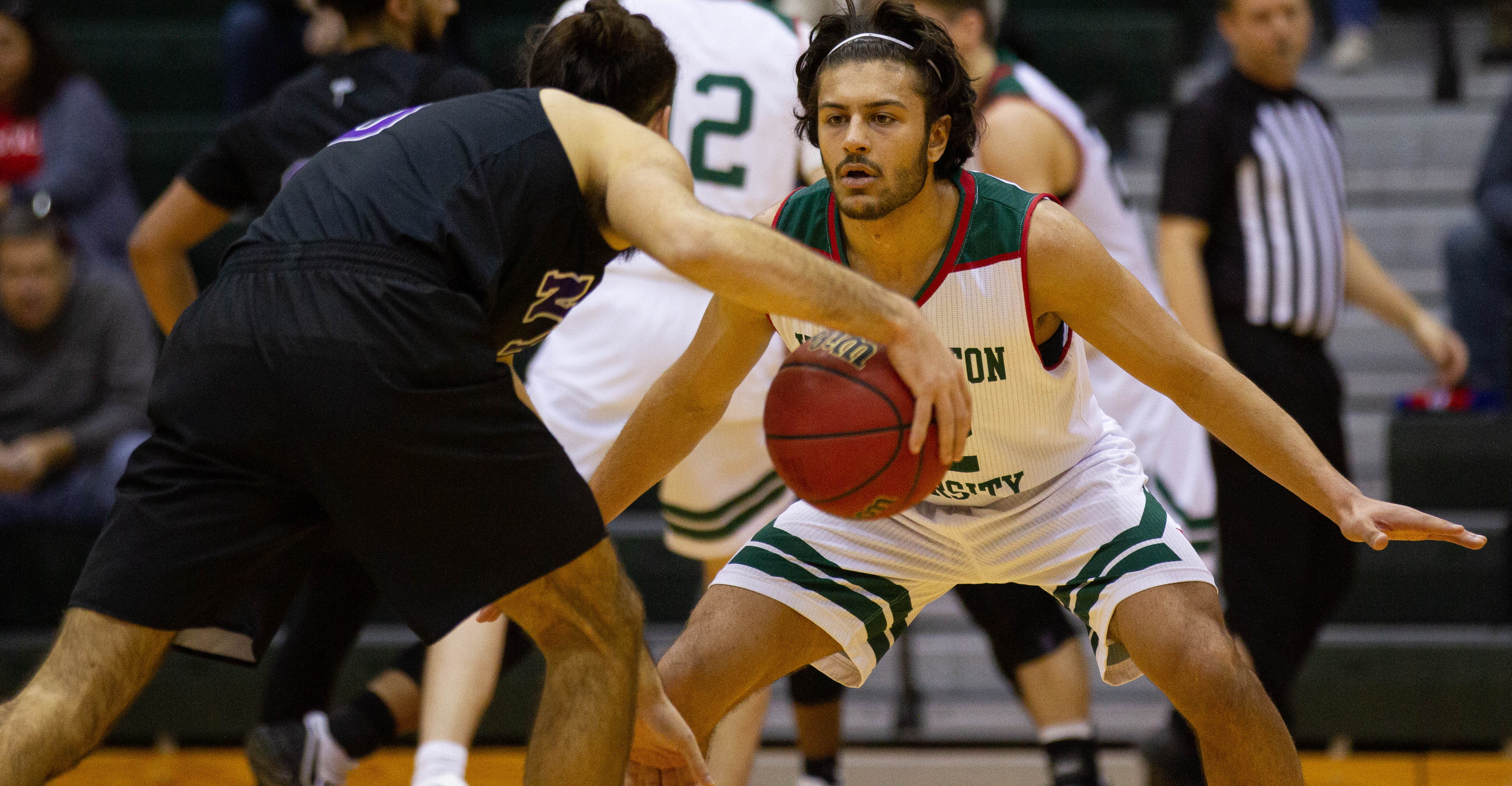 Sophomore Charlie Jacob guards a New York University player on Sunday. Jacob, who has stopped up in the absence of three injured starters, scored a career-high 14 points in the Bears’ come-from-behind victory. The Bears have won five straight and are undefeated in the UAA. They will take on the University of Rochester and Emory University next weekend.

Against NYU, Wash. U. struggled to find an early rhythm offensively, making just one of eight shots from beyond the arc in the first half. In addition to mediocre shooting, the Bears were plagued by turnovers. They gave the ball away eight times in the first half, compared to NYU’s two.

The Bears’ sloppiness out the gates frustrated senior DeVaughn Rucker, who scored a team-high 18 points on Sunday. “NYU was hitting shots, obviously getting rebounds, and we just didn’t have that initial doggedness,” he said.

In the second half, though, sparked by an exceptional performance from junior Jack Nolan, the Bears managed to breakthrough. In a third quarter stretch of just four minutes, Nolan notched 10 points. The guard finished the contest with 17 points on better than 50% shooting from the field. The team received contributions from across the board, including from sophomore Kameron Mack, whose 12-point outing marked his second straight double-digit outburst (he had a career-high 15 against Brandeis on Friday).

Sophomore guard Charlie Jacob—who finished five of six from the field in his highest-scoring game to date—credited the victory to much-improved ball movement in the second half. “We had to move the ball offensively and get more active and then come together as a team and just trust,” Jacob said. “I mean, that’s what we’ve been doing all year. Know that we have strength in numbers. If we continue to push, we’ll continue to find success.”

Head coach Pat Juckem also had high praise for his squad’s second half effort. Juckem was especially pleased with the younger players’ effort and was complimentary of Nolan’s ability to affect the game off-ball as a decoy. “[Nolan]’s unflappable. If you’re going to continue to take away Jack [Nolan], that’s going to create great opportunities for somebody else,” he said.

The Bears struggled with turnovers. Wash. U. turned the ball over 16 times to NYU’s 12. Many of these struggles can be attributed to the absence of three Wash. U. starters due to injury. Sophomore Justin Hardy and seniors Matt Nester and Hank Hunter each missed both games. Juckem said he was not sure whether any of the three would play next weekend, though each could provide a big boost in Wash. U.’s upcoming contests against Rochester and No. 8 Emory. The battle against the Eagles, who are currently second in the UAA, will be integral in deciding the outcome of the UAA regular season championship.

Nonetheless, Juckem is not overlooking his squad’s impending matchup with Rochester, which will happen first, on Friday at 8 p.m. “If you’re going to stay on top of the race and compete for a championship, there are teams that are roadblocks in your way,” he said. “The next one happens to be Rochester and [they’ve got a] good program there. You know, they don’t drop off. They’re really solid every year.”

With the pair of hard-fought wins this weekend against two talented, competitive squads, the Bears have proven that they can gut out close contests. In the words of coach Juckem, “Not every game is going to be a Picasso.”