Despite three starters missing significant time with injuries, Washington University swept past its UAA opponents over the weekend, defeating Case Western Reserve University and Carnegie Mellon University to advance to 12-2 on the season and 3-0 in the conference. The Bears have now won 10 of their last 11 games and have lost just once since Nov. 16.

Two of the team’s top three scorers, sophomore Justin Hardy and senior Matt Nester, did not play in either game, while senior Hank Hunter, the team’s third-best rebounder, played just eight minutes on Friday night against CWRU before sitting out against CMU on Sunday. 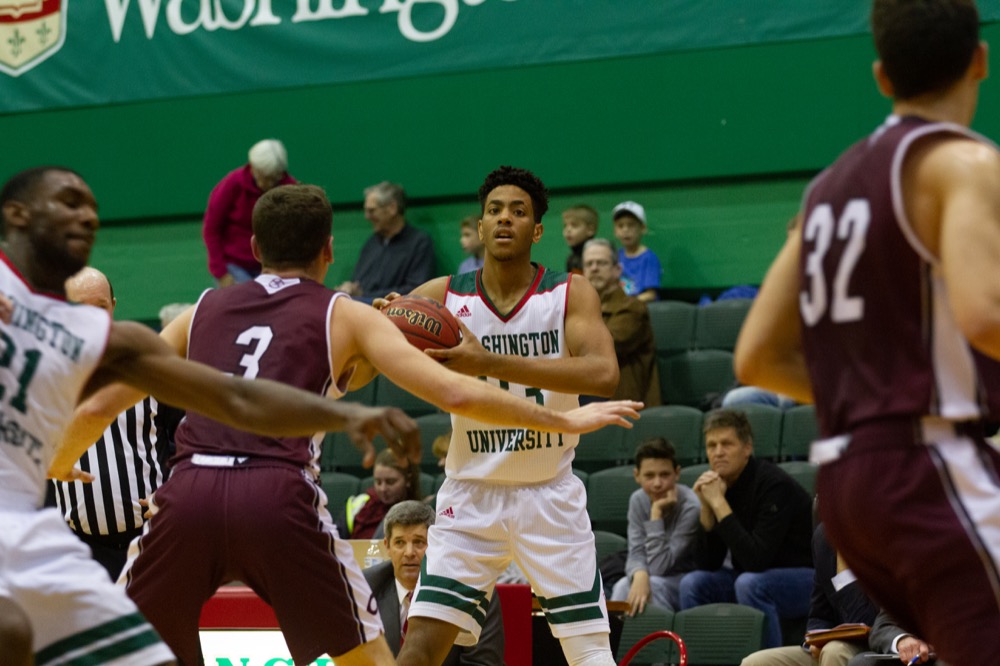 Kameron Mack scans the paint for an open pass against the University of Chicago Jan. 11. Mack sank a go-ahead three with 58 seconds to play against Carnegie Mellon University, Sunday.

“We’ve had some unfortunate luck with each one of those guys,” head coach Pat Juckem said Monday. Still, the Bears were able to battle through, beating CWRU, 88-66, on Friday and CMU, 80-72, on Sunday. “I just really like how our guys have responded. They haven’t made any excuses,” Juckem said.

Wash. U.’s margin of victory against CWRU was the Bears’ second-highest of the season. The team jumped out to an early lead when junior Payden Webb came off the bench to sink two three-pointers in a 40-second span to put the Bears up by 11 points just 10 minutes into the game. “I thought our guys came out and just played hard. We typically do, but I just loved how active we were,” Juckem said. “Defensively, I thought we were pretty locked in. Our defense kick-started us and we put together a pretty strong 20 minutes. It was contributions up and down the roster, essentially.”

CWRU crawled back in the second half, outscoring the Bears, 43-41, but the Tartans’ efforts were not enough. Webb finished with a game-high 21 points, while junior Jack Nolan and sophomore Kameron Mack racked up 13 each.

Mack played a crucial role against CMU as well, connecting on a three-pointer with 58 seconds left that put the Bears ahead for good. “Due to some injuries, [Mack’s] role has certainly elevated, but even preceding that we’ve seen the growth in his trajectory. His arrow has been pointing up,” Juckem said. He observed that the late-game situation was one where the team would typically try to get the ball to Hardy, who is averaging 15.6 points per game, but that Mack had filled the gap when the team most needed it.

“Kam has been given a few more opportunities and he’s really come through,” Juckem said. The sophomore finished with a career-high 15 points, 13 of which came in the second half. Senior DeVaughn Rucker had his second double-double of the season, scoring 10 and securing 10 rebounds, while Webb nearly matched his performance from Friday night, collecting 20 points off the bench.

“Anytime you can go on the road in UAA play and go 2-0, more good things occurred than not good,” he said. He emphasized the team’s focus and how various players have stepped up during the starters’ injuries. “I don’t think the expectations or the standards we have have changed one bit. We really don’t talk about it. Just you know, the guys who are healthy need to be ready to play,” Juckem said.

Hardy, Hunter and Nester are all questionable for the Bears’ two games this weekend against UAA opponents Brandeis University and New York University, according to Juckem. Wash. U. plays Brandeis at 8 p.m. on Friday and noon on Sunday.

For most of the game, the Tartans and Bears exchanged runs while remaining in striking distance of each other. Carnegie Mellon shot a higher percentage from the field (42.9%) than Wash. U. (37.3%), but the Bears maintained a sizable lead in rebounding (47-35) that allowed them to overcome their less than stellar shooting. With just over six minutes left in the fourth quarter, freshman Molly Gannon drilled a three pointer to tie the game at 55. She hit another three to give the Bears a lead. They never relinquished it. Wash. U. outscored CMU 27-18 in the pivotal quarter as the Bears took the game, their 54th win in a row against the Tartans.

Low field goal percentages have been a recurring problem for the Bears. The Red and Green are currently shooting 39.5% from the field, the second-worst rate in the University Athletic Association.

“We beat CMU because we got to the [free throw] line, had [fewer] turnovers, and got more second chances [from] offensive rebounding,” said head coach Randi Henderson in an email on Wednesday. “Improving [field goal] percentage has to do with both shot selection and shot repetition. You must take great shots, but earn the makes with repetition. We are starting to take better shots and move the ball, our assist per game is rising. I believe our [field goal percentage] will follow.”

Earlier in the weekend, Wash. U. fell to CWRU. After leading by nine in the fourth quarter, the Bears allowed the Spartans to get back into the game. In the waning seconds, CWRU’s McKenna Gross converted a three point play to give the Tartans a one point lead, 74-73. As time ticked down to zero, Wash. U. freshman Karisa Grandison missed a potential game-winning lay-up. While Grandison may have missed the shot, Henderson emphasized that it was the entire team who failed to capitalize down the stretch.

“We have learned the importance of playing four quarters, staying mentally and physically focused,” Henderson said. “We have also learned the value of each possession offensively and defensively. Losing by one point doesn’t happen in the last second of the game, it happens over a period of missed opportunities throughout a game.”

The women’s basketball will take the court again on Friday at 6 p.m. against Brandeis University and on Sunday at 2 p.m. against New York University.