Tennis sweeps DI Butler in doubles to open the season

The Washington University men’s tennis team does not have the luxury of an indoor court on campus to play on. Nor does it have the luxury of starting practice weeks prior to the competitive season. But neither of those luxuries was necessary as the Bears gave Division I Butler University their best shot on Monday morning. The Bears swept the doubles matches against the Bulldogs and played Butler close during the singles matches before ultimately falling, 4-1.

The Bears arrived at the Creve Coeur Racquet Club at 6:30 a.m. on Monday for their first practice of the season. They practiced for an hour and a half before their opponent arrived. In that time, head coach Roger Follmer had his team work on doubles drills.

Senior captain Bernardo Neves prepares to serve against his Butler opponent. The #9 Bears overpowered the D1 Bulldogs in doubles play Monday but failed to win a singles match.

“They hit three times that week on their own, but I hadn’t seen them until that day,” Follmer said. “We really worked on double stuff. I congratulated them afterwards on [there being] no pushback on some of the drills that we did. We really focused on the doubles and showed up.”

The drills paid off. Wash. U. not only won all three doubles matches, but the Bears beat Butler bloody, boldly bludgeoning the boisterous Bulldogs as they took the three doubles sets, 6-2, 6-2, and 6-3.

Butler swept all four singles matches that were played to completion. Junior Ethan Hillis lost to Butler’s Thomas Brennan in straight sets (7-5, 6-4). Senior captains Bernardo Neves and J.J. Kroot fared no better. Junior Koki Takabatake fell to Butler’s Olof Wiklund. The Bulldogs had a match against Saint Louis University scheduled for later that day, so after they reached four victories, the competition concluded and the Bears had lost. Junior Benjamin van der Sman and sophomore Luke Smith were unable to complete their matches due to Butler’s departure, but each Bear had taken a set from the Bulldogs. 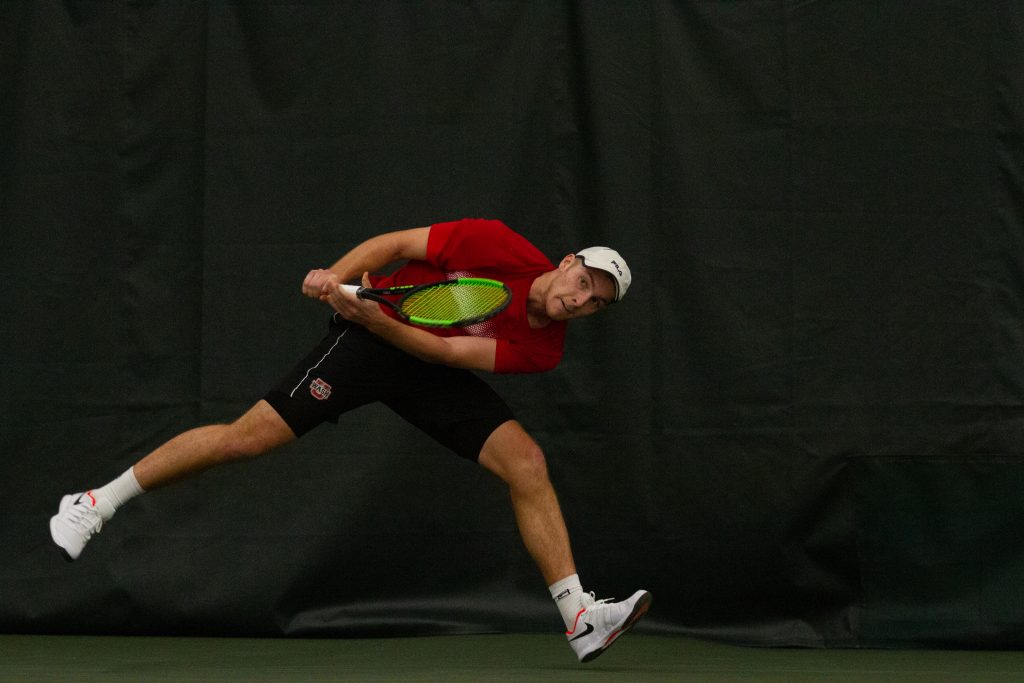 The match against Butler was an exciting start to the season for the tennis team. With just three practices under their belt, Follmer sees his team as one that will hopefully be able to compete against the best teams in Division III at the Indoor National Championships in Minnesota next month.

“It’s a great event with top teams like Claremont-Mudd-Scripps and Emory University, the top two teams in the country,” Follmer said. “If we play well, then maybe we’ll get a shot to play one or both those teams, but a lot of its gonna have to do with the preparation that we do [in] the next few weeks and those couple matches before national indoors.”