2019 was an eventful year for the Bears. Multiple teams got hot at the right time and looked like they were contending for national titles. Some familiar faces moved on to greener pastures. There were important moments, exciting moments, and important and exciting moments. Here’s a look at the top 10 Wash. U. sports stories of the year.

Honorable Mention: St. Louis Blues win the Stanley Cup: Not a Wash. U. sports moment, but it was still a fantastic moment overall. Go Blues.

Freshman Annie Mascot was one of the best—if not the best—golfer in Division III this semester. She won first place in her first two collegiate competitions. In her head-to-heads with other top-20 DIII golfers, she was 8-1-2. But the peak of her already illustrious career came in October, when she produced a school-record-breaking performance to win the Arkansas State Lady Red Wolves Classic. Mascot shot 5-under, three strokes better than her nearest competitor (University of Texas at Arlington’s Madigan Murray).

Sophomore forward Justin Hardy floats a shot over the outstretched arm of a defender.

The men’s basketball team graduated six seniors before its 2018-2019 season. The question coming into this season was who would replace their production. The answer, in part, was Justin Hardy. Hardy put up 14.6 points, 5.3 rebounds, and 3 assists per game. Each mark was good for second-best on the squad. For his efforts, Hardy was named to the DIII News All-Freshman Team and won UAA Rookie of the Year.

St. Louis isn’t just a soccer city. It is THE American soccer capital. We were surprised to learn this, but St. Louis has had a rich connection to soccer for decades despite not having an MLS team. That’s why when it was announced that St. Louis was getting a professional soccer team, it was a victory for the entire city. It was also a great moment for a city still reeling from the loss of the (now Los Angeles) Rams a few years ago. Really, this moment is probably the most widely impactful moment of any on this list, but because outside of men’s soccer head coach Joe Clarke’s connection to St. Louis soccer, there’s not much of a Wash. U. connection, we’re putting it at eight.

When No. 5 Wheaton College met No. 10 Wash. U. on Sept. 18, the Bears’ place as one of the best women’s soccer teams in the country was in question. They had started the season 2-1-1. They had suffered their first regular season loss since 2017 against University of St. Thomas earlier. With the game tied in double overtime against the Thunder, the Bears kept testing Wheaton goalkeeper Lauren Ketchum. In the waning moments of the game, Wash. U. quieted its critics with a stunning game-winning goal from freshman Jolie Carl. The exciting win was the fourth in a streak of 13 consecutive victories as the Bears finished the season as UAA champs.

6. Pitcher John Howard and the WU baseball team had a great spring

A 13-game winning streak powered No. 12 Wash. U. baseball to its best season in head coach Pat Bloom’s four-year tenure, as the Bears finished the year 34-7-1 and made it to the NCAA Regionals. The 34 wins matched a program high and the team had numerous other milestones as well. Finishing the season with a 1.23 earned run average, starting pitcher senior John Howard was named the D3baseball.com National Pitcher of the Year before being scouted by the St. Louis Cardinals. He was the only senior on last spring’s team, so expect much of the Bears’ success to continue next year.

The Bears’ road to the playoffs was pockmarked with overtime finishes, but this one tops them all. Wash. U. had fallen behind just after halftime when Claremont-Mudd-Scripps scored on a fast break, but the Bears answered right away, scoring as sophomore back Gabbie Cesarone slipped through the crowd to score on a header. Tensions were high, but when senior captain Taylor Cohen scored her 18th career game-winner in overtime, the crowd went wild and the mood was jovial.

Most of the entries on this list were team efforts, but we would be remiss if we didn’t mention the extraordinary individual achievements of junior Eka Jose. Jose broke the Wash. U. record(s) for the triple jump en route to winning the Indoor and Outdoor National Championships.

Against the University of Rochester, the Wash. U. women’s soccer team came from behind to win against a conference opponent. The win marked Jim Conlon’s 200th win as Wash. U.’s head coach; he is the first coach in Wash. U. history to reach the 200 mark. Coach Conlon is one of the kindest people in the athletic department. It was a pleasure to see him reach the milestone and a testament to the consistent excellence that he brings out of the program.

2. Women’s basketball gets deep into the playoffs 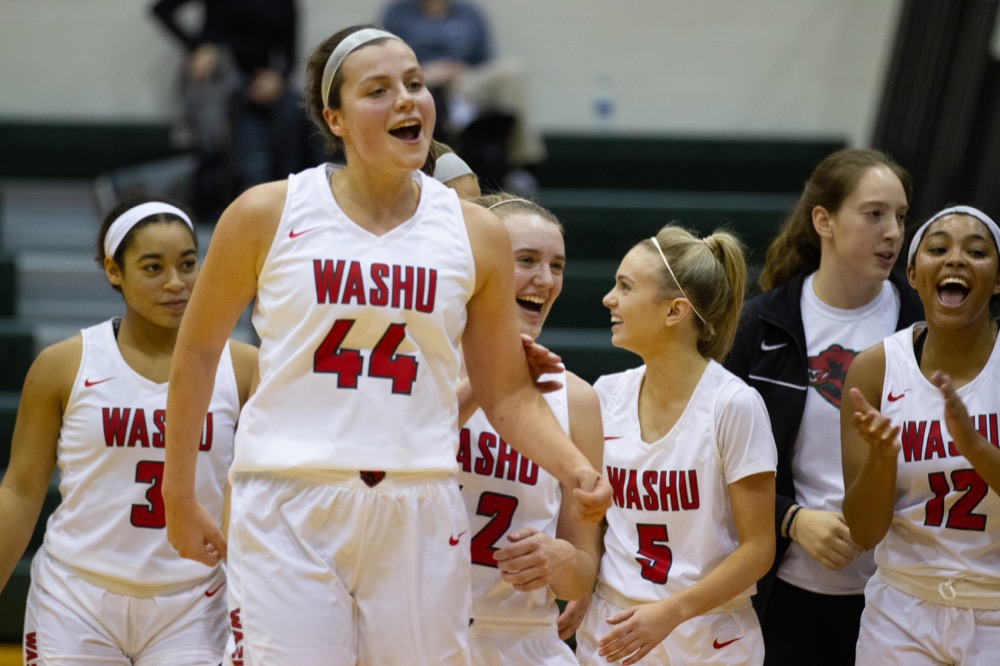 Before New Year’s Day of 2019, the women’s basketball team was 6-5. After New Year’s Day, they were one of the best teams in the county. They closed the season on a 16-2 run. After defeating then No. 22 University of Chicago to end the regular season, the Bears beat University of Wisconsin-Whitewater, No. 8 George Fox University and No. 12 University of Mary Hardin-Baylor before falling to No. 1 Thomas More University in the NCAA sectional final (Elite Eight).

1. Coach Kindbom retires after 31 seasons with Wash. U. football

Football coach Larry Kindbom stands watch on the sideline against Milikin University. Kindbom helmed the team for 31 years, racking up 192 wins and 119 losses on the gridiron.

Larry Kindbom started coaching at Wash. U. before any of the players on the 2019 football team were born. He was an integral part of the culture within the athletic department for 31 years. His teams were a model for consistency: In all but five of his 31 seasons at the helm of the Bears, his team managed a winning record. Kindbom’s retirement provided a chance to reflect on the impact that he’s had on the University. He touched the lives of hundreds of young men who have played for him. Wash. U. honored Kindbom after the Nov. 7 senior day loss to Millikin University with a powerful video and a thank-you ceremony. As athletic department faculty, former players and community members paid their respects to Coach K, the enormous impact that he has had on those around him was apparent.