St. Louis native Kristina Schmelter looks back on playoff run and the year to come

The Washington University women’s basketball team made it to the Elite Eight last season before falling, 87-72, to the top seed in the NCAA playoffs. Then the Bears graduated six seniors. Now, there are just two. With ten freshmen this year, Wash. U. is a much younger team now. Still, there are high hopes. The Bears split their openers last weekend, falling to Loras before beating Augustana. I sat down with St. Louis native Kristina Schmelter, one of the team’s two seniors, to talk about her experience on the team and what she expects from the year to come. 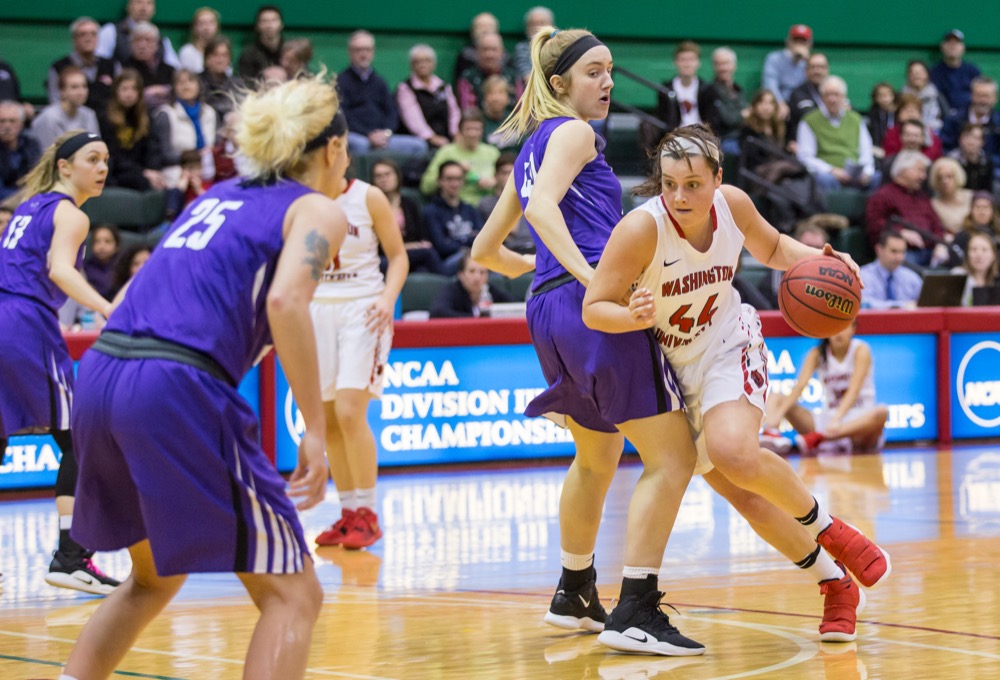 Then-junior Kristina Schmelter drives past a University of Wisconsin-Whitewater defender duing the NCAA playoffs this past March. Schmelter and her brother, David, have both played basketball for the Bears.

Student Life: Your brother David played men’s basketball here from 2014-2018. What was that like, playing at the same time as him here?

Kristina Schmelter: That was just awesome. Seeing his experience at Wash. U. is what first attracted me to come to Wash. U. Just being able to share that thing in common while we were both here was so fun, especially when we get into conference play. The men’s and women’s teams travel together, so watching each other play, being able to cheer for each other and experiencing it at the same time was really really fun. I’m sure my parents loved it too because they got to see us both play and got to travel to the same places.

SL: What has it been like being able to play in your hometown?

KS: It’s been awesome just having the support. My parents come to almost every game, whether it be home or away. So I’ve been really fortunate with that. And then even just with other family or friends in town or friends from high school when they’re home on break. We normally play over Thanksgiving or Winter Break and they get to be in town. It’s been really fun to have the support just constantly around.

KS: I’ve been playing basketball since I was five. I started out, I think, in the YMCA and then through school teams. Then, I think in about the third grade I started playing year-round, more competitively. It’s just kind of been a game I’ve always been drawn to and I’ve loved, so I stuck with it and it’s been awesome.

SL: Gotcha. You always hear about how soccer is big in St. Louis and how young kids are drawn to that. Did you always just play basketball?

KS: I think I was drawn to basketball initially. I mean, I’m tall, so my height probably played a factor in that. I was, at a young age, probably better at it than, per se, soccer, that’s more speed-involved. So at a younger age I was drawn to [basketball] that way and then kind of just continued from there.

KS: I’ve never dunked. It’s a dream of mine but I don’t have the tallest verticals so who knows how that’ll go. I think my favorite memories in general are just the people that I’ve surrounded myself with on every team I’ve been with and the friendships I’ve made. You rarely remember the wins and the losses, but you remember the time you spend with people around you, the way you push each other and practice, make each other better. Then also just the times you’ve spent hanging out and doing fun things with your teammates, all the travel trips in the summer, all the trips we take now. It’s just really fun to be able to surround yourself with a group of people and just form those bonds.

SL: You mentioned those trips that you take as a team. You’ve now done the University Athletic Association circuit twice, so is there a specific city you’ve enjoyed traveling to the most or a team you’ve liked playing?

KS: I always love the Chicago trip. I think them being our rival makes that really exciting to play. It’s the one game of the weekend, so we really get to focus on that game. Additionally, my whole dad’s side of the family is from Chicago, so getting to see them and playing a rival is a ton of fun.

SL: You talked a little bit earlier about how David playing here was part of what attracted you to Wash. U. What was that like? How did you decide on Wash. U. and what was the recruitment process like?

KS: I think that first seeing David’s experience—the positive experience he was having—was what kind of first drew me to look at Wash. U and then, outside of that, when it came to picking a college it really came down to picking a school that was a good fit for me whether basketball was involved or not. And I think that with the strong academics here at Wash. U., I was really drawn to that. On top of that, being to have such a strong basketball program gave me the best of both worlds.

SL: What has it been like with Coach Henderson over the last few years?

KS: It’s been fun just learning a coaching style. She plays very differently than any coach I’ve been under in terms of just being able to play a transition offense, where people just run and being able to make more basketball plays than a typically set up offense. I’ve really enjoyed that.

SL: How would you describe your personal play style? Or, is there a player that you think has inspired your play style, either professionally or someone you’ve encountered?

KS: I don’t know if you consider this a play style, but the plays I always remember the most in games are the ones where it’s a really good assist or we get a bunch of good rotations and we hit that last minute three-pointer. So I just love when the team is really working together cohesively and I think our most successful games are when the team is working so well, cohesively, that we’re able to get everyone’s scores and everyone is shooting well.

SL: What was it like last year during the NCAA tournament run when you guys got to the Elite Eight?

KS: That was an awesome experience. Last year was quite an interesting year. Our pre-conference play was not as strong as we’d like but we got into conference play and I don’t know if a light switched or what really happened, but then we went on a huge win streak. We were able to win conference, which was super super fun. And Coach really made a big deal about that, which was cool. We got to cut down the nets and all that. Going to the tournament, I think just having the confidence, knowing that our conference is so strong and we were able to compete with all of these teams, that gave us momentum. We really wanted to fight for that senior class. We had such a big senior class and I think that knowing it was their last year kept us fighting until the very end.

SL: You mentioned that senior class. Lots of people have graduated and now you’re one of only two seniors on the team. What is that like? How have you been able to step into that leadership position?

KS: It’s been very different. So, right now, currently with injuries and all this past weekend, we only had three returners play and then lots of freshmen. So, having such a young team has really just, I think, challenged me to step up because there’s no days off at this point. We have to learn so much and we have to grow every single day. We have to learn every practice, every game how to improve as a team and work together. We’re not coming off of lots of years of playing together, so getting that team chemistry as well has been such a focus in this preseason. Really, I think, based on these past games, it was a really positive start and I think we’ve had a lot of the younger girls really step up and we’re playing a lot better as a team. So I think just going forward if we can continue to grow on that, we can see a lot of success.

SL: What do you think you learned from that senior class last year, one of the most winning classes in history, people like Madeline Homoly or Becca Clark-Callender? What do you learn from them or what are some lessons that you took away?

KS: For the past couple years they pushed me every day to play harder and compete. Especially going up against Madeline Homoly every day in practice, she just pushed me to be such a better player. Getting to watch her and compete against her every day, I was able to learn from her. Also just [seeing last year’s seniors’] work ethic and how hard they pushed and also how they led as a group—that’s just something I’d like to do going forward.

SL: Do you have a specific memory that stands out to you from your years on the team?

KS: I mean, honestly, I think the best memory from last year was our very first conference game against Chicago. We were coming off that kind of rough pre-conference and we just went into that Chicago game wanting it so bad. It was at Chicago and so we were going into their territory and knowing, kind of, that they’re normally the ones who will win the conference if we don’t, so just going in there and really wanting to take that win. I remember walking into the locker room and everyone there was smiling so much. I think that’s what really gave us the confidence to compete going forward for the rest of the conference, knowing that we were capable of competing at such a high level if we really just pushed ourselves. I think from there on forward, we just pushed ourselves harder every day.

SL: What are you most looking forward to this season?

KS: It’s my senior year. It’s my last real competitive season. I think just giving it my all and playing one last time with these girls. Some of them who I’ve played a couple of years with and some of them this is my first year playing with them. I’d say creating memories and giving it my all for my last year.